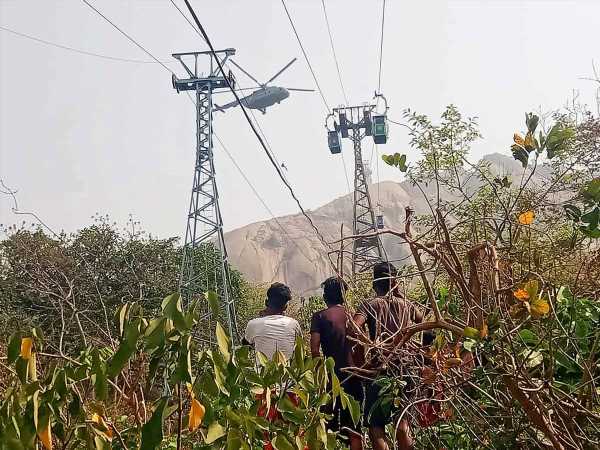 ‘Me and my boys had never ever thought in our wildest dreams that we would be taking part in a rescue mission of this kind.’
IAF Veteran Air Commodore Nitin Sathe, a helicopter pilot himself, reports on how the air force rescued those trapped in the Deoghar cable cars disaster last fortnight.

Hundreds of onlookers watched with bated breath and prayers on their lips. Amongst the onlookers was an excited ropeway employee who stood on a hillock, almost in line with the cabins, waving out. He seemed to be giving directions to the hovering helicopter with his hands.

“That man was good at what he was doing. Besides the inputs that my gunner was giving me to hover steady, I also relied on this man’s input to accurately hover over the cable cars,” the commanding officer recalls.

Most of the hapless survivors were reluctant to leave the safety of the cabin and hang below the helicopter and therefore, had to be cajoled and pushed, leading to delays in each rescue.

“Once a while, the winch wire would not be as taut as it ought to be, and as the survivor left the cabin, he would fall a metre or so leading to a little jerk to the helicopter,” the CO adds.

Hovering over ground is easy with many visual references available to the pilot. To hover so high up, in strong winds that upsets the helicopter, isn’t an easy task, every helicopter expert will tell you.

But with excellent crew coordination and superior piloting skills, the first rescues from the upper-most cable car was a success.

The crew was now confident of taking on the other cars one by one.

Another issue that the helicopter had to grapple with is the high stress on the aircraft engines and transmission systems.

In the heat of summer, prolonged hover can cause excessive oil temperatures in the gearboxes and engines. This can be brought down by initiating forward flight. 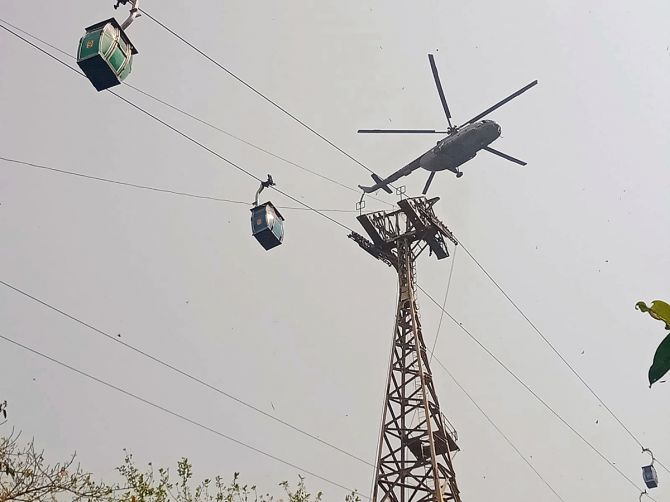 Once the Garud commando was dropped, it would take a while for him to get inside the cabin, provide water and a snack to the victims and brief them.

During this time, the helicopter would take off for an orbit and then come back after a few minutes to start the rescue.

“Without the din of the helicopter overhead, the Garud was able to brief the victims better and also calm their nerves better,” says another crew member.

A makeshift helipad near a road was created about 6 km from the accident site and that is where the first of the survivors were dropped before the helicopter went in for further rescues.

By the evening of the 11th, 22 survivors had been picked up to safety.

The sun was sinking into the west and darkness was taking over. Having realised that it may not be possible to finish the rescue on that day, the CO had sent across a message for another helicopter to be added for the operations the next day.

The Garud was asked to stay in the cabin for the night while the helicopter returned to Deoghar.

“The Garud got a first-hand experience of how the victims would have felt staying in the small cabin, swaying with the wind in the pitch dark night, and that too with the door open!”

At the same time, one Advanced Light Helicopter, located at Tezpur, being flown by the CO of the ALH Squadron, was attempting a rescue from a cabin located at the other end of the valley.

They had been activated for augmentation by the afternoon of 11th and had flown for four hours plus before landing at Deoghar by 1700 hours.

Since there was time for one sortie, a quick briefing was carried out between the crews of the Mi-17 and the smaller chopper was on its way for the mission.

“We were attempting a rescue from the trolley at the other end of the valley so as to maintain adequate lateral separation between the two helicopters.

“The drill was similar to what was being followed by our bigger brothers. While one might think that a smaller helicopter was better suited, it was not so.

“The effect of strong winds on our machine was that much higher, and, to maintain the helicopter steady at hover was a more difficult task indeed,” says the CO of the ALH Squadron.

“Undeterred, and confident of success, we commenced our operations again on the 12th of April. Since the trolleys left for rescue were in the middle of the valley, only one helicopter could operate at a time and we let the Mi-17 start the day’s work,” says the CO of the ALH Squadron.

“As he came in for refuelling, we took off to take his place and carried out 13 life-saving winchings that morning”, he says. “And yes, we now used the rescue strops used by the Mi-17 this time since they were easier to use and more robust.” 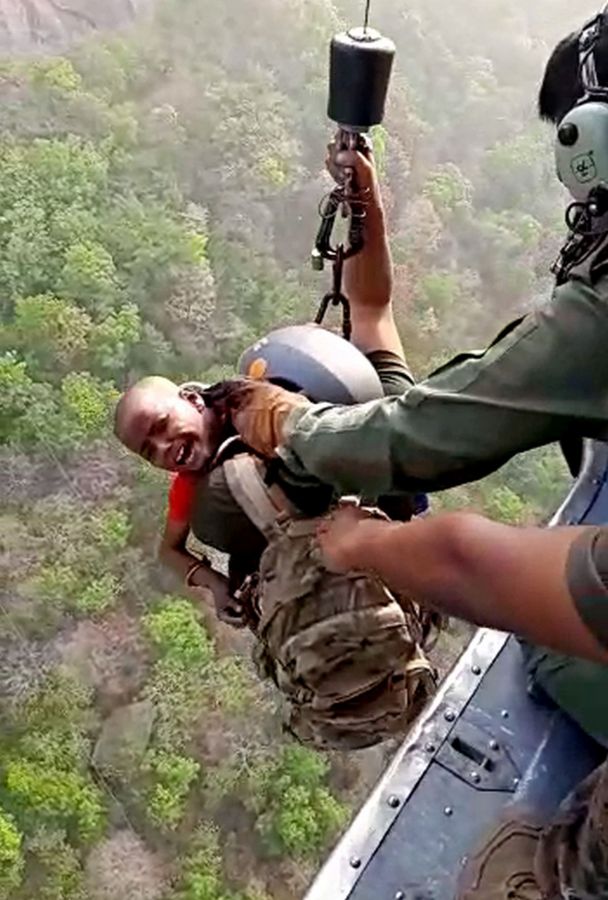 In one of the last winching, a little boy had to be winched up and the crew realised that he needed a small harness.

“Thanks to the quick action by the district officials, they managed to get us a small baby carrying harness.

“We first winched up very reluctant parents who were not happy to leave their child alone.

“But there was no choice in the matter. We had decided that the child, having been strapped to the small harness, would be then secured to the commando who was to be winched up last.”

This operation took the longest time as the child was delirious and could not be calmed down despite the Garud’s best efforts.

The CO of the Garud commandos, also recounted his experience of the rescue.

“Me and my boys had never ever thought in our wildest dreams that we would be taking part in a rescue mission of this kind.

“It was full of danger and we knew we were playing with our lives.

“As we went down on the winch with prayers on our lips, we got badly bruised banging against the side of the cable car.

“Almost all of us had cuts and bruises all over, and our bodies hurt with the strenuous work and acrobatics that we had to do to get inside the trolleys.

“I do believe that it is the quality of our training that helped us do what we did, and I am so proud of my boys.”

Besides being physically stressful, it was more emotionally draining for the Garuds too. They were the first human beings to meet those stuck in the cable cars and the meeting itself was emotional.

“The physical and mental condition of the survivors who wept and wailed affected us too. It took a lot of effort and talking to calm down the people inside the cabin before we could go ahead with the rescue,” says the CO of the Garuds. 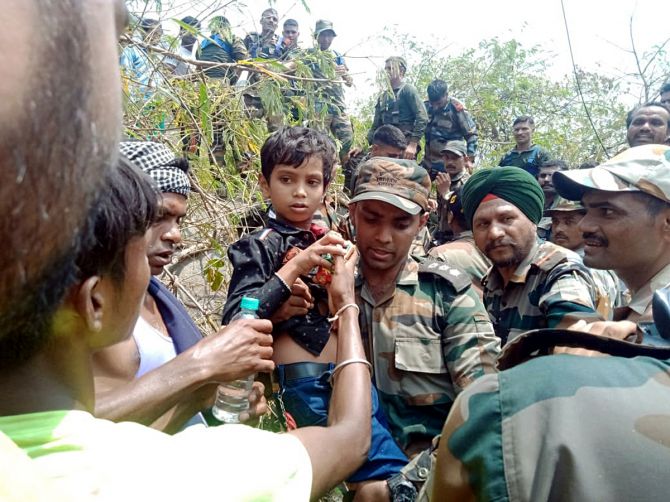 One Garud commando tells me about how these conversations went …

‘Hum aap ke jaise hi hain, agar hum upar se aa sakte hain to aap bhi upar ja sakte ho…Dekho hum kaise aaram se latak kar aaye hain…kuch nahi hoga… (We are like you only, if we can come down on the wire, you can go up too, you saw us hanging from the helicopter without a problem, nothing will happen…)’

‘Tum agar bhagwan me vishvas rakhte ho to kuch nahi hoga. Vishwas karo mera, hum aapke liye aayen hain, aapko himmat nahi harni hai… aap ko kuch nahi hoga, bus do minute me aap helicopter me baithoge. Bas jaisa mai kehta hoon vaisa karo… (If you believe in God, nothing will happen to you. Have faith in me. We have come to rescue you, please do not give up, nothing will happen to you…in a minute or two, you shall be safe inside the helicopter…Just listen to me carefully and do what I tell you…)’

The armed forces have the training and wherewithal to undertake such commitments, and often become first responders in tragedies like these.

Maybe, we could think of classifying disasters and into categories by which this response loop can be tightened.

The Disaster Management Act also can be reviewed and tweaked, taking inputs from all stakeholders and from experiences in such missions.

All participants in the rescue need to liaison with each other and understand the limitations and strengths of every actor in the game.

Exercises and practice drills for the same are most important, and must be carried out by all in letter and spirit. 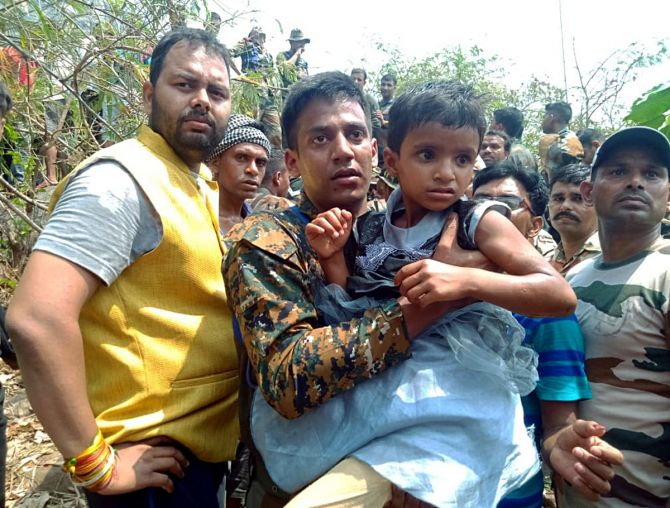 The accomplishment of every mission is due to many hundreds of people in the chain.

Events are controlled at every level… From Delhi at Air HQ where lateral liaison happened with other agencies like the NDRF and Army, flowing down to Command HQ which gave the execution orders and monitored minute to minute progress of the rescue, the IAF station which provided the aircraft, aircrew, technicians and the commandos, the radio operator, the Meteorology man, the district administration, the people who found a smaller size jacket for the child, the media, the netas and so many more who combined to become a life-saving force and led to success of a mission that, at the beginning, seemed an uphill task.

Life-saving missions are life threatening too. Risks have to be taken to save lives and to do this, training is most important.

The IAF has proved it yet again that they rise to the occasion and take on seemingly impossible tasks, and accomplish them with élan and professionalism.

The helicopter units have a common motto…Apatsu Mitram, which means friends in distress. The helicopters of the IAF have always lived up to this motto.

In times to come, they will continue to be harbingers of hope and happiness to people in distress.

Many salutes to all those involved in the operation for a job well done.