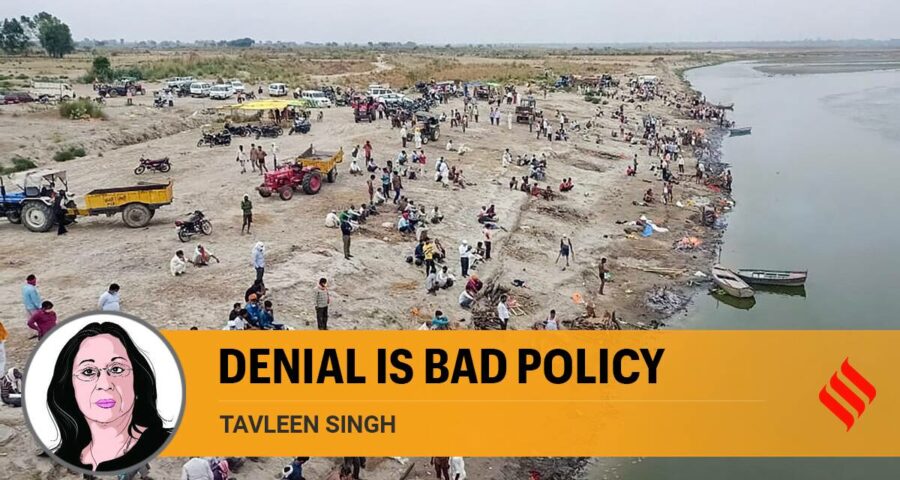 Denial is the shield that the BJP’s mightiest leaders have been using ever since the pandemic reached catastrophic levels. Our worst nightmares are coming true. The pestilence has spread into the heart of rural Uttar Pradesh and Bihar and is causing unspeakable misery. Too many are dying and families who are too poor to buy wood for cremating the dead simply push them into the Ganga. Last week, bodies started piling up along its banks. Some were cremated by villagers or buried in shallow graves, others rotted in the sun and got eaten by dogs and vultures. Local officials are mostly absent and when they appear, as a BJP woman politician did in a UP village when bodies were being pulled out of the river, they deny that anything is wrong. It is quite normal for Hindus to give their loved ones a ‘water burial’, this lady said, when a TV reporter questioned her about the death toll.

Denial is the shield that the BJP’s mightiest leaders have been using ever since the pandemic reached catastrophic levels. Yogi Adityanath is among those who have used it most. He continues to try and persuade the people of his state that there is no shortage of oxygen, hospital beds or medicines. Denial becomes pointless when dead bodies start to wash up on the banks of the Ganga. Denial becomes useless when people continue to die in hospitals across the country from a shortage of oxygen. This is a message that seems to have not reached the Prime Minister. If it had, he would order his ministers and high officials to stop lying about the true horror of what is happening.

He would start listening to the reporters who risk their lives to travel into rural India to try and tell the truth. Instead, he allows trolls ‘proud to be followed by Modi’ to call these reporters ‘vultures’. Has the Prime Minister not noticed yet that this contagion will never be controlled until we know the full extent of its spread and the real death toll? Denial has become a useless tactic because distinguished scientists and doctors in other countries have started saying openly that the number of people dying of Covid in India could be as much as 20 times higher than the official figure. The BBC reported last week that half the Covid cases in the world are now in India.

We are in the middle of a national catastrophe the likes of which most of us have never seen before. When the Prime Minister gets out of denial mode, he may notice that he needs all the help he can get. The Opposition leaders who came together to write him a letter offering ideas on how we can find our way out of this catastrophe should have been invited for a discussion. Instead, the letter they wrote was dismissed by his minions as an attempt to spread ‘negativity’. The most important idea that came from these Opposition leaders was that the procurement of vaccines should be centrally controlled or the mess that already exists on the vaccination front will become worse.

The only way that we are going to win the fight against Covid is by vaccinations. And it cannot be repeated often enough that the task force charged with procuring vaccines failed abysmally. When this became obvious, Mr Modi announced that state governments should find vaccines from wherever they can. No, Prime Minister. This is your job. State governments can only take charge of the logistics of vaccinating people as soon as possible.

After dumping the policy mess on chief ministers, came more evidence of confusion last week. The man who heads the Covid-19 task force, Dr Vinod Paul, suddenly emerged to announce that between August and December, “216 crore doses will be made available” in India. He did not explain how this will be possible in such a short time. But if he is still in charge, then let him give an affidavit in the Supreme Court that guarantees this and clarifies whether these vaccine doses will be procured by the Central government or state governments.

Denial is the main reason why the Prime Minister has not yet set up a new crisis management group. When he comes out of denial mode, he may see that a new task force should include chief ministers and Opposition leaders along with scientists and doctors. A crisis of this magnitude cannot be handled any more by the Prime Minister’s Office. So far it has been, possibly with the intention of allowing Modi to take credit, as he did last time. In the first wave his devotees never failed to remind us that, without him, there would be ‘corpses piled high in the streets’. Now they are not just piling up in cremation grounds but washing up on the banks of our most sacred river.

We know this because of some excellent reportage by this newspaper, India Today, Barkha Dutt, and a small army of local reporters who have risked their lives to bring us the truth of what is happening in rural Uttar Pradesh and Bihar. Instead of praise for their service, trolls deployed by the BJP abuse them daily for what they call ‘vulture journalism’. Modi remains silent in the face of this kind of sickening charge made not just by trolls but by BJP spokesmen, and this must mean he approves. This makes him seem like a leader who is more worried about his image than the country.

This column first appeared in the print edition on May 16, 2021 under the title ‘Denial is bad policy’.