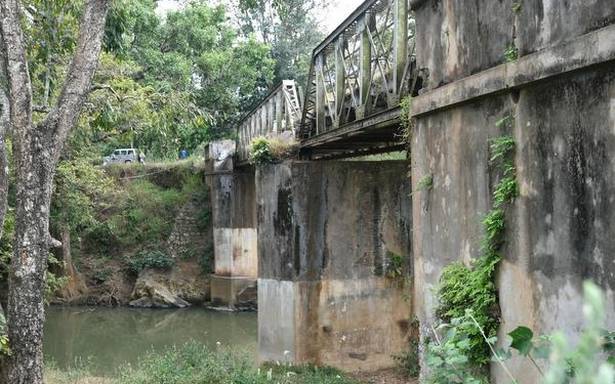 An iron girder bridge that runs over Moyar River and due to its narrow width has succeeded in keeping heavy vehicle traffic passing through the Mudumalai Tiger Reserve (MTR) to a minimum is to be replaced.

The bridge, located in front of the Theppakadu Reception Centre, was said to be weak, and needed to be replaced for the last nine years, said officials from the State Highways Department. However, as a wider bridge would have required the approval of the Ministry of Environment and Forests (MoEF), a decision was taken to replace the existing one with a structure of the same proportion, the officials said.

Conservationists have for years opposed widening the bridge as the current width, measuring a little over 4 metres, ensures that heavy vehicles from Gudalur, Kerala and Karnataka are not able to pass through the section and into the core area of the tiger reserve between Theppakadu and Masinagudi. This meant that vehicles travelling to Gudalur and Karnataka from Udhagamandalam too do not usually pass through the tiger reserve, but are forced to taking the longer route via Gudalur.

When contacted, Field Director of MTR, K.K. Kaushal, said permission had been granted by the Chief Wildlife Warden on condition that the bridge should not exceed the current dimensions. “As there is no transfer of land taking place, the permission from the MoEF is not required,” he said.

Forest Department officials said discussions were held with the Divisional Engineer of the State Highways Department A.S. Viswanathan to come up with a plan to find a detour bypassing the bridge during its construction. “An existing path in the area will be paved and traffic will be diverted till the work on the bridge is completed. The highways has handed over ₹ 25 lakh to the Forest Department for the work to be completed,” an official said. The entire project is estimated to cost ₹ 2 crore, officials said.

The stretch of the Moyar where the bridge is to be rebuilt is famous for sightings of marsh crocodiles and smooth-coated otters. Mr. Kaushal said all efforts would be taken to ensure that the development works would not have an impact on the riverine ecosystem of the tiger reserve.