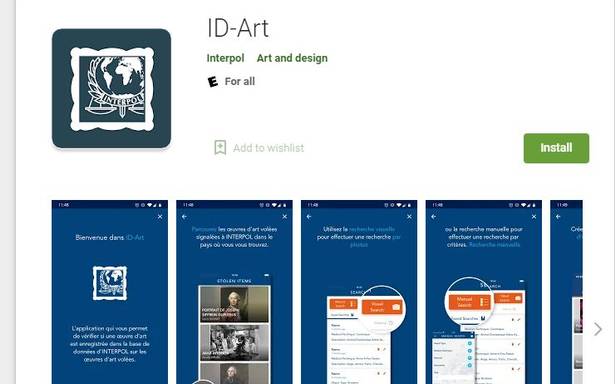 The Interpol has launched a mobile phone application (app) which will help identify stolen cultural property, reduce smuggling and increase the possibility of recovering stolen works and artefacts.

The ‘ID-Art’ app enables users — from law enforcement agencies to the general public — to get mobile access to the Interpol database of stolen works of art, create an inventory of private art collections and report cultural sites that are potentially at risk, said the Interpol. It is available for both Android and Apple devices.

The app’s users can immediately cross-check if an object is among the over 52,000 items registered as stolen in the Interpol’s “Stolen Works of Art” database.

“In recent years, we have witnessed the unprecedented ransack by terrorists of the cultural heritage of countries arising from armed conflict, organised looting and cultural cleansing,” said Interpol Secretary General Jürgen Stock, adding that the new tool was a significant step forward in enhancing the ability of police officers, cultural heritage professionals and the general public to protect our common heritage.

“Using international standards known as Object ID, museums and private collectors can capture images and record features of their works of art on the App to help keep track of their collections. In the event of a theft, these records can be provided to law enforcement, greatly enhancing the chances of recovery,” said the Interpol in a statement.

Apart from allowing documentation of the state of heritage sites, the App enables recording of the geographical location. “The resulting ‘site cards’ can then be used as evidence or basis for reconstruction if ever the site is looted or destroyed,” it said.

During the pilot phase earlier this year, in Italy, the app helped in the identification of two stolen statues that were put up on sale on a commercial platform, leading to a judicial inquiry. Authorities in the Netherlands also recovered two stolen paintings after the Dutch Art Crime Unit identified the paintings using the ID-Art app.