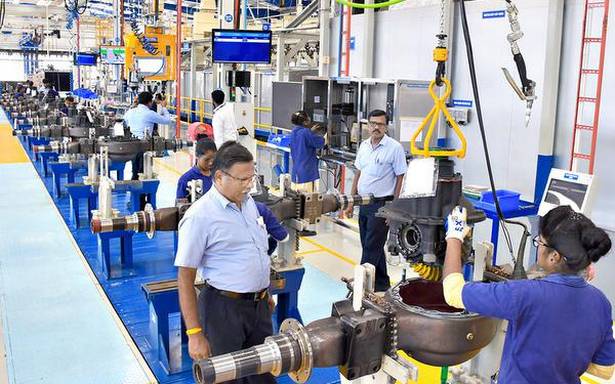 The manufacturing units under general engineering and Micro Small and Medium Enterprises (MSMEs) in Mysuru are bracing for a long haul ahead of their full revival.

Though industries across all sectors have been permitted to reopen and function with 100% of their staff from Monday as part of the unlocking in the State, industries expect resumption of normal operations to take some more time.

“It is not that the workers will return from Monday and the machinery can be switched on to start the production process. There are issues related to supply and demand of raw materials and the industrial activity will gain traction only in response to the general economic revival,” said A.S. Satish, president, Mysore Chamber of Commerce and Industry (MCCI).

The bulk of the units in Mysuru under MSMEs are ancillary to the automobile industry and their fortunes hinge on the performance of the larger units. The raw materials are procured from other States and a lockdown or a delay during transit elsewhere could throw the manufacturing schedule out of gear.

“A large section of the workers in the age group of 18 to 44 are yet to be vaccinated and not a single camp could be held in Mysuru owing to vaccine scarcity and the current focus on students. Hence, many of the workers are expected to play safe and absenteeism will continue,” said Suresh Kumar Jain of Mysuru Industries Association (MIA).

“There are nearly 2.5 lakh industrial workers in Mysuru and the first priority will be to get them vaccinated so as to ensure that the industrial units are not forced to shut down in a future wave as the pandemic is not going to go away anytime soon,” Mr. Jain added.

The general engineering and manufacturing units that were not categorized under the ‘priority’ sector faced the brunt of the lockdown during the second wave as they were not permitted to function. Subsequently, as part of the graded unlocking they were allowed to operate with 50% workforce.

But Mr. Jain said a majority of the MSMEs had a nominal functioning as apart from the workers, there were issues related to lack of orders during the second wave. The cascading impact of the lockdown will continue to be felt for the foreseeable future before the production can revert to the pre-pandemic levels, said Mr. Satish.

The MSMEs are also under pressure from financial institutions that are goading them to clear the loans extended. But in the absence of production, the MSMEs are unable to meet their obligation to banks and hence a virtual meeting was conducted with the local officials to recalibrate the loan duration. On the workers front, the industrial units have to re-train some of the local recruits to take up specialised jobs that were earlier being undertaken by skilled migrant workers. This will add to the operational cost of the already financially beleaguered units.