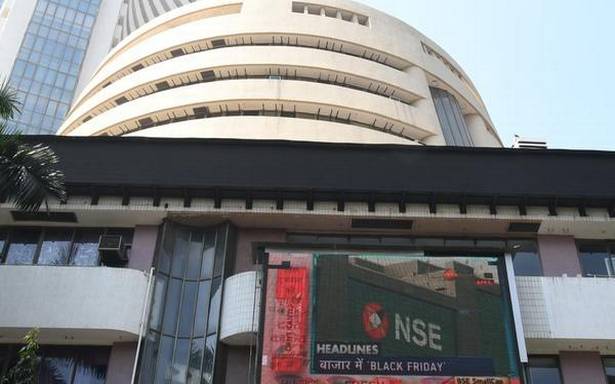 With all agencies downsizing growth projections, the equity market is vulnerable to a major correction

Even as the real economy returns to the doldrums after being hit by the second wave of COVID-19 infections, the continuing bull run in India’s equity market in the April-June quarter has baffled many observers. After breaching the 41,000-mark between December 2019 and February 2020, the benchmark BSE Sensex had nosedived to below 28,000 in March-April 2020, following the nationwide lockdown. Although India’s stringent lockdown could not prevent the COVID-19 pandemic from doing considerable damage, the equity market posted a sharp V-shaped recovery in 2020-21. The Sensex surged beyond 50,000 in February 2021 and is currently closing on the 53,000 level.

Why is there an equity bubble?

This equity market exuberance at a time of severe socio-economic distress has prodded the Reserve Bank of India (RBI)’s annual report (2020-21) to state: “This order of asset price inflation in the context of the estimated 8 per cent contraction in GDP in 2020-21 poses the risk of a bubble.” An analysis in the same annual report though sees “a part of Sensex increase” as “rational”, being supported by improved corporate earnings.

Whether bubbles can at all be “rational” remains a matter of academic debate. Empirical evidence across several centuries, however, bears out a home truth — sooner or later, bubbles burst. There was an 81%-plus growth in the Sensex between April 2020 and March 2021 in the backdrop of real GDP growth plummeting to -7.3% during the same period. While output contraction had reversed from the third quarter of 2020-21, the inflation rate also rose and remained way ahead of the real GDP growth rate in the last two quarters (Chart 1). It is difficult to find any rationality behind the skyrocketing BSE Sensex in the context of such stagflation in the real economy.

Just like the precipitous fall in the equity prices was driven by foreign portfolio investors (FPI) net selling over ₹68,800 crore worth of equities in March-April 2020, the return of massive FPI inflows has driven the Indian equity bubble since then (Chart 2). Net FPI inflows clocked an unprecedented ₹2.74 lakh crore in 2020-21, the previous high being ₹1.4 lakh crore in 2012-13. While the mutual funds were net sellers during 2020-21 to the tune of ₹1.2 lakh crore, retail investors chased higher equity market returns, with the interest rates falling across the board. As reported by the RBI, 1.43 crore demat accounts were opened in 2020-21 as against around 50 lakh accounts opened in 2019-20.

The equity bubble in India has not evolved in isolation. The global liquidity glut, following the expansionary, easy money policies adopted by the fiscal and monetary authorities of the OECD and G20 countries, has led to equity price inflation in several markets driven by FPIs, especially in Asia. Following cues from the U.S. and the U.K., Asian equity markets in Singapore, India, Thailand, Malaysia and Hong Kong are currently witnessing price-earnings (P/E) ratios significantly above their historic means. The BSE Sensex’s P/E ratio of 32 in end-June 2021 is way above its historic mean of around 20.

Correction in the equity market

With COVID-19 vaccination and economic recovery proceeding apace in the U.S., the U.K. and Europe, fiscal and monetary policy stances will change soon. Once the U.S. Federal Reserve and other central banks start raising interest rates, the direction of FPI flows will invariably change bringing about corrections in equity markets across Asia.

India remains particularly vulnerable to a major correction in the equity market because of two reasons. First, the pace of COVID-19 vaccination in India, given the vast population, lags behind most large countries. India has so far fully vaccinated only 6.3% of its population. Within G20 countries, only Indonesia and South Africa are at similar levels, with 6.1% and 2.9% of their populations fully vaccinated, respectively. Many other countries have ensured much higher rates of vaccination. The U.S., the U.K. and China have fully vaccinated half their populations. In contrast, insufficient budgetary allocation and mismanagement of vaccine procurement has created severe supply bottlenecks in India, which have brought down the pace of vaccination in July. In the absence of a substantial increase in the vaccination budget and procurement, large segments of the Indian population will remain vulnerable to a potential third wave of COVID-19, with its attendant deleterious impact on the real economy. Second, India’s economic recovery from the recession will remain constrained by the weak fiscal stimulus that has been delivered by the Central government. Data from the IMF clearly show that while the total global stimulus consisted of additional public spending or revenue foregone measures amounting to 7.4% of global GDP, India’s fiscal measures amounted to 3.3% of GDP only, less than half of the global average. Only three countries in the G20 had a smaller fiscal stimulus than India’s (Saudi Arabia, Turkey and Mexico). The large doses of additional liquidity support, which in many of the G20 countries/ regions like the European Union, Japan, South Korea, India and Turkey exceeded the size of the fiscal measures, have contributed more to the equity bubbles than to spurring real economic activity.

The second COVID-19 wave had hit India at a time when the economy had just started showing signs of acceleration, reflected in a sharp rise in GST collections and gross tax revenues in April 2021. The consequent lockdowns once again disrupted economic activity and led to a deceleration in GST and gross tax revenues in May and June 2021. With all agencies, including the RBI, downsizing India’s growth projections for 2021-22, it remains to be seen whether India’s equity bubble lasts beyond end-August 2021, when the first quarter GDP results are due. If it does, it will only be for a while, before one or the other possible trigger causes speculative finance capital to change its course.