The fourth edition of IE Thinc Migration series, moderated by Udit Misra, Deputy Associate Editor, The Indian Express, had panelists discuss why the difficulties of millions of migrant workers have stopped being part of the national discourse, and what can be done to change this. 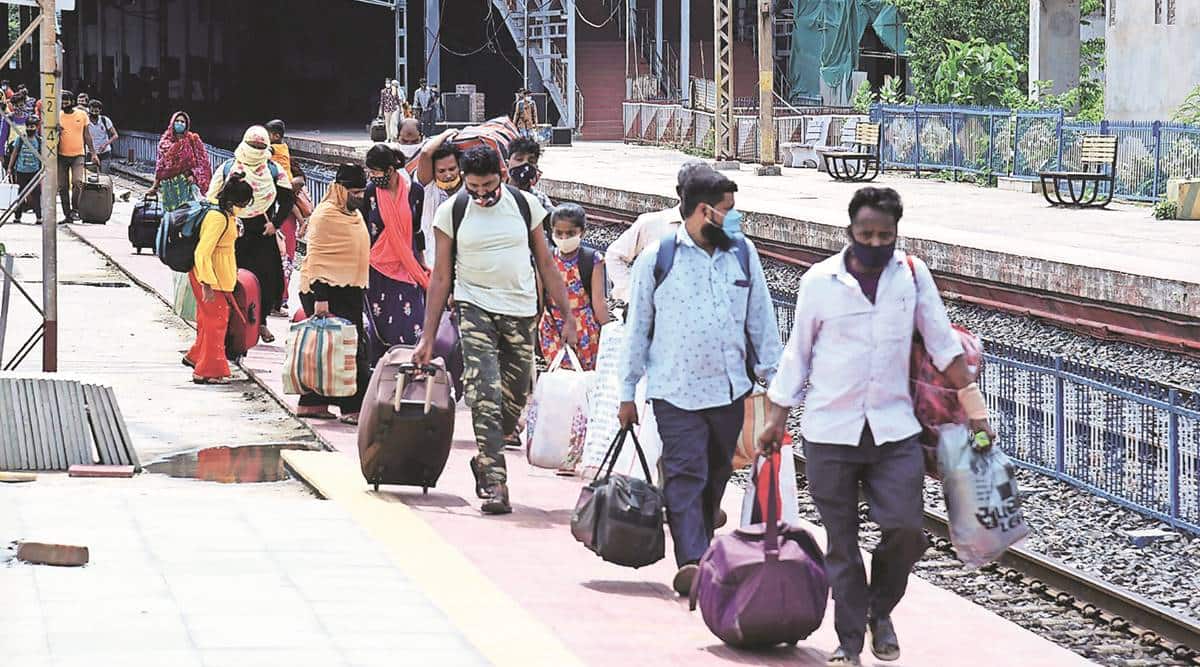 The fourth edition of IE Thinc Migration series, moderated by Udit Misra, Deputy Associate Editor, The Indian Express, had panelists discuss why the difficulties of millions of migrant workers have stopped being part of the national discourse, and what can be done to change this.

The migrant crisis in the second wave Vinod Kapri: I am in touch with several migrant labourers even today. I’d say that this time around, as deaths happened and oxygen shortage happened, migrant labourers were affected a lot. They made their way back home, only this time buses and trains were running and they reached home. But I can say with certainty that many of them went back home because they have this clarity that after the lockdown, they will be the first to be ignored. They will be the first to be asked to leave home. And if later, trains are stopped, they will be forced to cycle back home or worse, walk. Even after one year, they can’t trust this system, they can’t trust us. Archana Garodia Gupta: The number of migrants in India is about 400 million, which is probably the highest percentage anywhere in the world. At about 30-35 per cent, India has the highest percentage of migrant labour. This has happened because of lopsided growth, the concentration of jobs in a few places, and these jobs are not permanent and don’t pay enough. Some people do become settlers but they need a permanent job and enough income to support families in a city. If jobs were closer home, you wouldn’t have the migrant crisis to this extent. Or if you migrated to another city for a job, there is a responsibility to make the migrant a settler. It is not a good way for human beings to live away from their family for the whole year. We have to think of building structures that can help people live with families. So focus has to be on job growth and the government has to focus on promoting MSMEs and labour intensive industry.

Does civil society give enough in India? Atul Satija: This obviously was the biggest disaster the world has seen in a long time. But we have seen in smaller, routine earthquakes, cyclones, floods and other disasters every year, civil society’s response is similar. There is rescue, relief, some recovery and support, and a rehab phase after that. As long as the dialogue is strong in the media, in boardrooms, in drawing rooms, civil society support is always very strong. During the disaster time, it is easy for them to come forward and offer support because we are connected as human beings and there is higher empathy. When the dialogue stops, then we all get back to our routine busy lives. In the ICRF, the India Covid Response Fund we launched last year and again this year, we have 10 lakh donors who came forward and donated on our platform. Our partner platforms had another 25 lakh people who donated. This is only the tip of the giving in India. We give when we trust people. So when my driver or maid, someone I know in my community is in pain, we help. So, support during disaster time is actually not a problem.

What happens is that understanding of the need to invest in rehab, permanent problems that are there like what Archana said, such as livelihoods, job creation, gender crisis, [is lacking]. The role of civil society is to have a dialogue, make stakeholders accountable, the role of government is to create policies and infrastructure but there is also the role of the private sector to come forward and see fortune in the migrant workforce as businesses… The trifecta of samaj, sarkar and bazaar have to come together to solve (the crisis).

On the invisible migrant labourer

Kapri: Why are we failing to recognise them and why are they still invisible? In our phone diary, we have to see how we saved the names of service providers. Till before the lockdown, I had saved the names of these workers, such as the person who delivers the newspaper, as Newspaper wallah. These people are all wallahs to us. We have never considered them as human.

The need for structural intervention Ranjana Kumari: This was total insensitivity of the state mechanism in the country. They did not want to confront the problem. Who are these people? They are the poorest from the village, who migrate to cities. They are not seasonal migrants but also settlers. They had some kind of job guarantee and even they have gone back because they lost their jobs or companies shut down. How did employers get rid of them so easily? Nobody bothered to ask why employers hadn’t taken responsibility. The government did not make any policy regarding them. More importantly, because of the feminisation and sexual division of labour, women labourers have gone back and have not been cared for. Middle class and upper class people love their services but they don’t want to see them around. So many schemes have been launched like Jan Dhan. Out of 76 per cent account holders who are women, only 23 per cent are getting any transfer of money to their account. These are not even below the poverty line. The government needs to fix the minimum wages and maintain equity. There is a big disparity in the vaccination rates between men and women too. They are not healthy and don’t have health insurance and now they are not getting vaccinations.

We need structural policy intervention. Nobody wants to leave their home and village and come to urban areas, struggle and survive. Instead of the Central Vista, [we need] a lot of infrastructure in the rural sector and that will create employment. We need to give every hand work so that every mouth can be fed. I think priorities have been lost at the moment. We can be Santa Claus but we have to be advocates and voices for [the migrants]. NITI Aayog has to work out a whole plan for migrant labour.

Including the migrant labourer

Satija: An inclusion of migrants in the mainstream has to happen and that cannot happen unless it is formal inclusion. You can’t say you have a voting right but you can’t vote because you are in Bangalore but your community is from Jharkhand. You can’t vote at destination or at source. If you look at slums in cities, you can see the difference in the infrastructure between a migratory slum and a slum from the same state. In Bangalore, Kannada slums have access to water, sanitation and nearby education in their mother tongue. If they don’t have a local vote, who will care for the migrants? The system can’t care because it is responding to votes. Similarly at home, they are not participating in local democratic institutions. If they are not sitting when you decide where the MGNREGA money will go, they will not get the benefit. So you are always at the bottom of the stack.

Gupta: In India, we have a bank of craftspeople which is dying out. These are skills for which there is a demand. The world demand for handicrafts is around Rs 400 billion and India just exports for a billion rupees while we have about 30 per cent of the world’s craftspeople. By creating networks for women to get them onto e-commerce platforms — we can push livelihood and income to the villages. You have examples across the world which have successfully done this. For example, you have a platform called Tombow in China which has been working on rural e-commerce. It is owned by Alibaba. Working with the government, they have designated one lakh villages as Tombow villages. Villages where this has been successful, there is reverse migration.