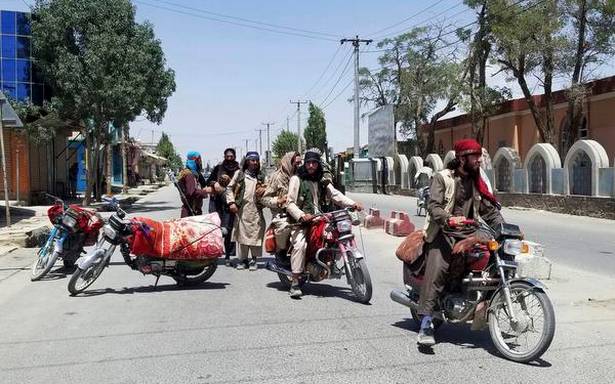 ‘India is keenly watching the unfolding situation in Afghanistan’

India will take all necessary steps to ensure safety of Hindu and Sikh minority community members in Afghanistan, said an official of the Ministry of External Affairs on Thursday. Addressing the weekly media interaction, official Spokesperson Arindam Bagchi said India is keenly watching the unfolding situation in Afghanistan and argued that “external malign influences” should be stopped from taking over the country.

“We have facilitated the return of a large number of members of the Hindu and Sikh communities last year. Our mission continues to remain in touch with them and we will ensure the provision of all necessary assistance to them,” said Mr. Bagchi, who reiterated that Indian nationals in Afghanistan should return home. He also maintained that reports of India considering shutting down the Embassy in Kabul were incorrect.

Taliban fighters have taken over at least ten provincial capitals in a week and reports suggest that they have surrounded the city of Mazar-e-Sharif, increasing pressure on the capital Kabul, which has a significant number of Indians. In response to a viral video of Taliban fighters inspecting an Mi-35 Hind helicopter after taking over the Kunduz airport near the border with Tajikistan, the Indian official said, “It was not an Indian Air Force helicopter. It [ownership of the gunship] is an internal matter of Afghanistan.” Early reports after the video had suggested that the helicopter was a part of the military assistance that India had provided to the government of President Ashraf Ghani.

India evacuated a number of citizens on Wednesday morning from Mazar-e-Sharif in the backdrop of increased chances of a conflict in the city. Officials however maintained that, as of now, there is no plan to evacuate the remaining Indians through a government-sponsored initiative, suggesting that as of now, the advisory is for citizens to return using commercially available flights. “We are concerned about the deteriorating security situation. Last year, our mission in Kabul had facilitated the return of 383 members of the Hindu and Sikh communities," said Mr. Bagchi.

The rapid gains made by Taliban fighters on the ground have surprised observers. who had not anticipated such rapid setbacks for the government of Afghanistan in Kabul, which has received billions in development assistance from India. India has also built major infrastructure projects in Afghanistan but is at present urging all Indian personnel employed in such projects to return before commercial flights are discontinued. Asked about the future of these projects Mr. Bagchi highlighted that infrastructure projects like electricity stations, dams and IT facilities, built with Indian assistance, belong to Afghanistan, and India hopes that the country would continue to look after them in the future.

Mr. Bagchi refused to spell out details of India’s outreach towards the Taliban and maintained that the Indian diplomatic team is in touch with all stakeholdders. He refused to specify if India would welcome Afghan refugees who wish to leave the country in view of the resurgence of Taliban.