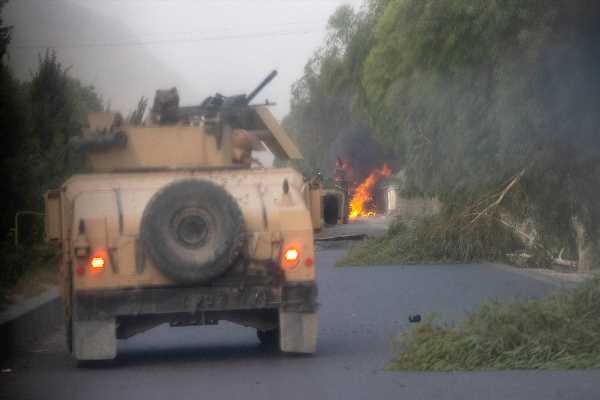 Robust military preparedness along the entire perimeter of our nation is the only iron-clad permanent guarantee for our security, asserts Vivek Gumaste.

The discordant voices emanating from the Taliban and the continuous flip-flops do not inspire confidence for negotiations.

Last year social media was abuzz with claims that a Taliban spokesperson Zabihullah Mujahid had said ‘It was impossible to be friends with India unless the Kashmir dispute was resolved’ and that the Taliban would, after capturing power in Kabul, ‘capture Kashmir from infidels’.

Refuting the claim, Suhail Shaheen, spokesperson for the Islamic Emirate of Afghanistan, the political wing of Taliban, clarified (external link), ‘The statement published in the media about the Taliban joining jihad in Kashmir is wrong. The policy of the Islamic Emirate is clear, that it does not interfere in the internal affairs of other countries.’

This conciliatory tone may have been a ploy to temper India’s military support for the Afghan government till the Taliban attained its objective,

Post the recent gains made by the Taliban, it has changed its tune as this excerpt from an article (external link) indicates: ‘Suhail Shaheen, a spokesperson for the group, spoke to Foreign Policy from Doha soon after he returned from Moscow, where he and his colleagues assuaged Russia’s concerns on sliding security in areas bordering former Soviet States.’

‘Shaheen demanded that India must first prove its neutrality in the conflict if it wants to talk to the Taliban. “We have political relations with Russia, Iran, and China not for one or two but many years. We have visited them many times and assured them that we won’t let Afghan territory be used against them,” he said.’

‘”India was siding with the government installed by foreigners. They are not with us. If they stick to their policy of supporting a government imposed on Afghans, then maybe they should be worried. That is a wrong policy which will not serve them’.”

Realistically speaking, talks with the Taliban are a futile venture and unlikely to yield any results. But there can be no harm in India pursuing this line of thought as a lateral avenue.

Against this tripartite unholy alliance of Pakistan, the Taliban and Kashmir-centric terrorist groups, the civilian-led government of Ashraf Ghani, however weak it may appear, is still India’s best bet to protect its interests in Afghanistan and its security concerns in Kashmir.

Moreover, the current government in Afghanistan has some degree of legitimacy as compared to the Taliban that aims to usurp power by violent means.

A quick and complete takeover by the Taliban may not be a given. Recently, alarmed by the rapid gains on the ground by the Taliban, the US launched multiple airstrikes against the Taliban positions in and around Kandahar to stall the Taliban’s concerning advance. And there are indications that there may be more air strikes in support of the ANDSF at least till the end of August.

While US security personnel remain guarded in their statements, it is possible that even after complete withdrawal the US may continue to support the ANDSF with airstrikes from bases in the neighbourhood.

The New York Times reports: ‘Defense Secretary Lloyd J Austin III said (external link) that American forces had equipped a base ‘to be able to conduct over-the-horizon strikes’ in Afghanistan. Other officials said the base was in the United Arab Emirates.

So, short of putting boots on the ground, India must continue to support the Afghan national security forces as it has done so far by training army personnel and with supply of essential military equipment.

In addition, it should initiate a broader diplomatic and operational initiative under the aegis of the Shanghai Cooperation Organisation and the United Nations to stall a violent takeover of Afghanistan by the Taliban.

The SCO or Shanghai Pact consisting of countries adjacent to Afghanistan is specially suited to tackle this crisis. In fact, the SCO, earlier known as the Shanghai Five, came into existence in the late 1990s to tackle the twin horrors of terrorism and narcotics trade emanating from the earlier Afghan civil war.

Multilateralism is an attractive and advisable option but challenging in the context of the SCO owing to the complex and differing interests of the major members, especially India and China.

But an op-ed (external link) by Andrey Kortunov, director general of the Russian International Affairs Council, in the Global Times, which is the official publication of the Chinese Communist party, offers a ray of hope. He calls on the SCO nations to sink their differences and embrace multilateralism to resolve the Afghan problem and prevent a radical Islamic government in Afghanistan.

Kortunov surmises: ‘From now on, the future of Afghanistan should be a matter of concern not for remote overseas powers, but for regional players around this country — such as Iran, Pakistan, China, Russia, India and Central Asia countries. The ability or inability of these players to come to a common denominator on their respective approaches to Afghanistan will become the critical external factor affecting the country’s future.’

While we can continue to explore these options, we must realise that in the ultimate analysis we must be responsible for our own security without being dependent on external permutations and combinations.

In short, a robust and advanced military preparedness along the entire perimeter of our nation is the only iron-clad permanent guarantee for our security.

Academic Vivek Gumaste, who is based in the United States, is the author of My India: Musings of a Patriot. You can e-mail the author at [email protected]