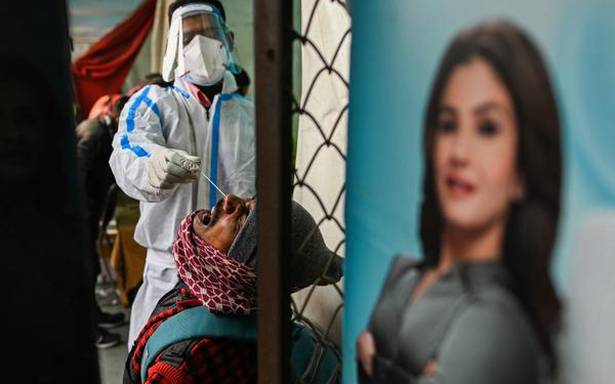 It could put ‘stress on health infrastructure’, says official and directs States to ramp up facilities

India reported 22,775 COVID-19 cases on January 1 when for the first time the number of daily cases had crossed the 20,000 mark since October.

Warning that the rise in cases seen globally and India could put “stress on health infrastructure”, Union Health Secretary Rajesh Bhushan on January 1 wrote to the States to create additional isolation beds, makeshift hospitals, field hospitals and paediatric care units. The States ought to follow up with those in home isolation and spruce up their control rooms that would coordinate with people requiring a bed and an ambulance.

Experts estimate that nearly half the emerging cases in Delhi are likely to be of the Omicron variant.

As States report data on hospitalisation and bed availability inconsistently, similar estimates aren’t available for all of them.

Mumbai on January 1 accounted for nearly 60% of Maharashtra’s caseload on January 1. An update from the Municipal Corporation of Greater Mumbai said 2,760 (about 9%) of the available beds were occupied.

Also read | Registration being started for immunisation of children in 15-18 age group against COVID-19: Health Minister

The number of Omicron cases in the State jumped from 46 on December 30 to 121 on January 1. The majority of them were only “mildly symptomatic”. Officials said patients were being taken to hospitals as a precaution and to avoid spread among close contacts.

Kerala reported 107 cases of COVID-19 which tested positive for Omicron as on December 31.

All the Omicron-positive cases were isolated in separate government or private health facilities in the respective districts. None of these cases have required oxygen supplementation, ICU admission or ventilator support.

Though the cumulative number of Omicron cases has touched 107, no data was forthcoming on how many are in hospitals. But the general hospitalisation trend in the State has been remaining steady.

Out of the 18,904 active cases in the State now, only 10.7% are admitted either in hospitals or field hospitals. This percentage has been more or less constant since weeks, officials say.

Editorial | Prepare for the worst: On Omicron response

Karnataka reported 1,033 cases of COVID-19, taking the total to 30,08,370. Bengaluru Urban reported 810 cases and two deaths. Nearly 87% of the 9,386 active cases as of January 1 were under home isolation. Only 49 of the 1,849 govt quota beds were occupied. However, these numbers don’t account for people admitted in the private sector.

Andhra Pradesh recorded 176 more COVID-19 infections, the highest single-day tally in the past 23 days as of January 1 morning with no deaths reported.

For the first time since the peak week of the second wave in May, in the weekly comparison, the State reported a 25% rise in the number of infections in the past week (December 26 to January 1) compared to the previous week (December 19-27) with 911 and 727 infections respectively.

While 14 persons have been found to have tested positive for Omicron, 6 of them required hospitalisation. According to the Odisha Health and Family Welfare department, one person has been discharged.

Of the 14 Omicron infected persons, 13 are foreign returnees

There have been eight cases of hospitalisation due to Omicron in the northeast India.

Telangana recorded over 300 cases for the second consecutive day even as 12 more Omicron cases came to light on January 1, taking the tally of the new variant to 79.

(With inputs from bureaus)