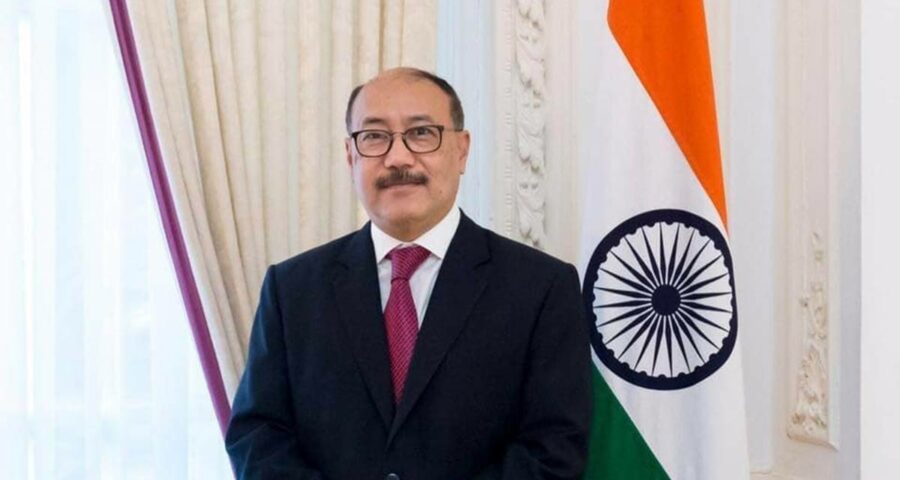 Addressing a meeting hosted by the Diplomatic Academy of Russian Ministry of Foreign Affairs, Shringla also said the process of disengagement of Indian and Chinese soldiers in eastern Ladakh is expected to be concluded in the next two to three days. India’s relationship with China is “complex” and the two neighbours cannot have a “normal” bilateral relationship if there is “transgression” in the border areas, Foreign Secretary Harsh Vardhan Shringla said here on Wednesday.

Addressing a meeting hosted by the Diplomatic Academy of Russian Ministry of Foreign Affairs, Shringla also said the process of disengagement of Indian and Chinese soldiers in eastern Ladakh is expected to be concluded in the next two to three days.

He said that the relationship between the two Asian giants is definitely dependent on the normal situation at the border.

“As I told our friends in China, we cannot have a normal bilateral relationship if there is no peace and tranquility in our border areas. The relationship is definitely dependent on the normal situation at the border,” Shringla, on a two-day official visit to Moscow, said.

“We cannot have our troops having loss of life, having situation of transgression at the border and still go about a normal relationship,” he said.

Indian and Chinese militaries are locked in a bitter standoff in eastern Ladakh since May last year.

The two countries last week reached an agreement on disengagement in the North and South banks of Pangong lake in eastern Ladakh that mandates both sides to “cease” forward deployment of troops in a “phased, coordinated and verifiable” manner, in a breakthrough after a nine-month border standoff.

“In the last few days we (India and China) have started what is called a disengagement plan. We have come to some kind of understanding with China after nine months of negotiations on a plan of disengagement that would involve frontline troops, that were in close proximity to each other, I would say, going to their permanent bases and thereby preventing any chance of any mishap or miscalculation of troops being in close proximity to each other,” Shringla said.

“We do believe that in the next two or three days this process would have come to a conclusion and I think that’s a step in the right direction.”

But he said it is “difficult to say” how that will go from there,

He said the relationship with China is “complex.” But he said that bilateral ties have seen a fair amount of growth in the past few decades.

In the 1980s, both the countries decided that they will set aside their differences on the boundary issue while work to develop cooperation in other areas like trade and science and technology, he said.

“We don’t have a common perception on boundaries. There will be special envoys who will look into the issue. Meanwhile, we will work on developing other areas of cooperation like trade and science and technology. In last few years, trade has gone up significantly with China,” he said.

“But the developments last year in terms of very large number of troops were amassed on our borders, attempts at multiple transgressions along the Line of Actual Control (LAC) did create a situation that I suppose impacted the the larger relationship,” he said.

The border standoff between the Indian and Chinese militaries erupted on May 5 following a violent clash in the Pangong lake areas and both sides gradually enhanced their deployment by rushing in tens of thousands of soldiers as well as heavy weaponry even as the two sides continued military and diplomatic talks.

He underlined that the two countries have historical linkages through Buddhism, trade of different nature et al.

When asked about America’s vision to isolate China in the Indo-Pacific region, Shringla said, “Our vision and concept of Indo-Pacific is a free, open and inclusive area where countries work to promote cooperation, promote connectivity, promote your idea of rules-based international order in which freedom of navigation is given.”

He said that when Prime Minister Narendra Modi talks about the security in the region his vision is “free, open, transparent, inclusive region in which all countries can participate and participate in a cooperative manner that delivers results for people all over. It’s a win-win situation.”

On India-US relations, Shringla said, “we do believe that we have in many senses established the basis for a bipartisan support for the relationship between India and the US. In other words, the Democrats or the Republicans, we have support for a strong India-US ties.”

“The relationship is based on shared values and principles, but of course there is also a very large people to people contact and we have four million people of Indian origin in the US. We also have strong trade and economic relationships. We have strong investments in each other’s countries. There is a very strong synergy and there is a potential to take it further always exist,” he said.

He said India would like to work more closely with Russia on taking forward the cooperation in the region, in particular along with its friends from the ASEAN, South East Asia and under organisations like the ASEAN regional forum and the East Asia summit.

“A multi-polar world and a multi-polar Asia is important for both India and Russia and this is not possible without the involvement of both the countries,” he added.