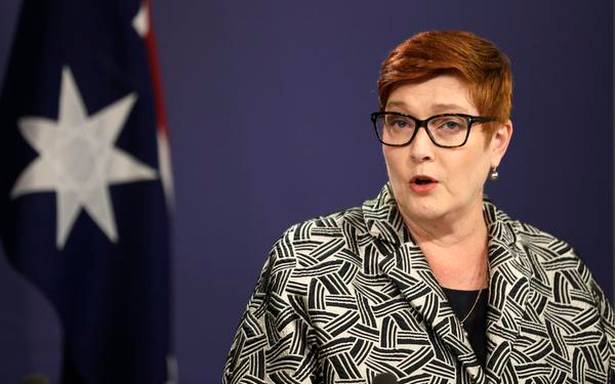 India and Australia will hold the inaugural ‘2+2’ Ministerial meeting here during the upcoming visit of Foreign Minister Marise Payne and Minister of Defence Peter Dutton. The meeting will be part of Australia’s engagements with regional partners as the Ministers will visit Indonesia, India, South Korea and the United States for Indo-Pacific consultations.

“These inaugural 2+2 discussions are a cornerstone of the Australia-India Comprehensive Strategic Partnership, which is founded on a shared commitment to a secure, stable and prosperous Indo-Pacific region,” said Ms. Payne before starting the four country tour. A statement from the Minister said the bilateral relationship is at a “historic high” and the discussion between Ms. Payne and her Indian counterpart Dr. S. Jaishankar will cover, economic issues, cyber security, climate change, critical technology and supply chains. Mr. Dutton will hold the defence cooperation related meeting with his Indian counterpart Rajnath Singh.

The Sydney Morning Herald has reported that the discussion in Delhi is likely to include a bilateral free trade agreement. India and Australia have been in negotiation over a possible free trade deal, which has so far not yielded a positive result. The Ministerial meetings will be held in the backdrop of the evacuation of western forces from Afghanistan where Australia had a military presence. Australia has evacuated around 4,100 persons from Afghanistan.

India and Australia have increased interoperability in the maritime domain in the recent months. Both sides have signed a ‘Joint Guidance for Navy to Navy Relationship Document’. Close cooperation in regional and multilateral fora like Indian Ocean Naval Symposium (IONS), Western Pacific Naval Symposium (WPNS), Indian Ocean Rim Association (IORA) and ASEAN are some of the highlights of the document. The document is aligned to the ‘2020 Comprehensive Strategic Partnership’ agreed by Prime Ministers of India and Australia. Expanding bilateral defence relations, India and Australia signed Mutual Logistics Support Agreement. Australia has also deployed a Liaison Officer at the Indian Navy’s Information Fusion Centre for Indian Ocean Region (IFC-IOR) as part of joint maritime efforts.

India and Australia also have to deal with the disruption in people to people contacts because of the COVID-19 pandemic. India has been demanding clarity from Canberra on the policy on the large number of citizens who have secured admission in Australian universities but are unable to study on campus as Australia has not yet opened the country for international travel. As of now, Australian citizens and permanent residents alone can travel to Australia.