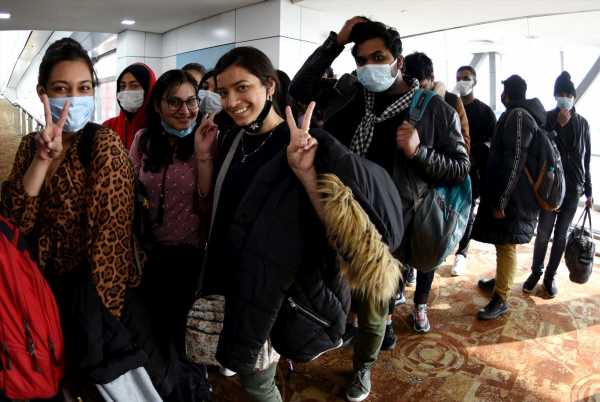 ‘The Indian embassy should not have spoken in diplomatic terms to students.’
‘They should have spoken to them with a more personal touch, which they didn’t do.’

Nitesh Singh quit his job with Amazon and started Team SOS India (TSI) after he saw migrant labourers walking home helplessly during the Covid lockdown in May 2020.

Their plight moved him so much that he decided his life’s mission would be to help distressed Indians, be it in India or abroad.

An engineering student from Jabalpur, Singh came to Pune for work, but gave up his job and started giving tuitions to children to sustain himself financially.

In the three years of its existence, TSI has been a pointer for Indian embassies across the world looking to help Indians who are in distress.

Since the war broke out in Ukraine, TSI volunteers have been working non-stop to ensure that many Indian students reached Poland, Hungary, Romania and Slovakia.

“There is still a lot more to do,” Nitesh tells Syed Firdaus Ashraf/Rediff.com, as there are another 6,000 Indian students who are still stranded in Ukraine.

How did this idea come up to help save Indian students in Ukraine?

This was not planned and I never imagined in my wildest dream that Team SOS India will become this big.

I started this in May 2020 and three months later my friend Megha Jain joined me.

At that time I knew of American, British and Australian organisations that help citizens of their country in and outside who are in trouble and stranded.

But I’d never heard of an Indian organisation of such type. Therefore, I thought, why not start an organisation that would help every citizen of India who is stranded anywhere in India or the world.

How did you start out helping Indian students stranded in Ukraine?

There was a medical student, Harsh, studying in Ivano-Frankivsk city of Western Ukraine. He is associated with Team SOS India. He communicated with me and told me that Russian planes are bombing Ukraine and many students were stuck and not getting help.

He told us that he was safe and at that time I realised if Russia invades Ukraine, then the students who are studying in Ukrainian cities that are closer to Russian borders will be severely affected.

We then with the help of our team members circulated forms to Indian students stranded in Ukraine on how they can get help like finding food, accommodation and (government) transport.

Sadly, the attack was full-blown from the Russian side and that time the Indian embassy in Ukraine told the students to reach the borders of other countries on their own. We then started contacting through social media and set up a local network in Ukraine for arranging cabs or buses for stranded Indian students.

But then the problem arose as we found that some people started spreading incorrect and old updates. And we realised that in such times such information can cost people’s lives.

We then became cautious and started verifying the information and made sure that any outdated information must not be shared with stranded students on our Telegram and WhatsApp groups.

After that, we started getting messages from parents in India who were looking for their children missing in Ukraine.

We then immediately formed a small team within our team to do this job. Their job was to trace the missing students in Ukraine by getting in touch with other students in Ukraine because many times the students’s phone batteries used to die and they had no access to a mobile charger so they simply went missing.

Where are you operating from?

I am staying as a paying guest in a room in Pune and working on my laptop. I have other volunteers who are in Gujarat, Hyderabad, Mumbai and even in the Andamans.

Right now, we have a team of 163 people working on the Ukraine crisis. And believe me, our networking skills are very good to help people out.

How did TSI become so viral that Indian students started talking to you from Ukraine?

I don’t know. I never gave many interviews to journalists till date. I am doing it only as a concerned Indian citizen. I try to help and many times I don’t succeed too, but I don’t give up. I try contacting other sources for help.

I feel when your intentions are good such things become viral because we are not taking any money for this cause. I feel when you don’t want anything in life for personal gains, those things happen.

If your intention is pure and when people realise this fact about you, they readily help.

Believe me, most people want to help others, but the problem is that they do not know whom to trust. Once you win their trust, they help.

How many Indian students are stuck in Ukraine right now?

Are they all across Ukrainian cities?

No, they are mostly stuck on the eastern side of Ukraine (closer to Russia). On the west Ukraine side, every Indian student has left the country.

How are people approaching you? 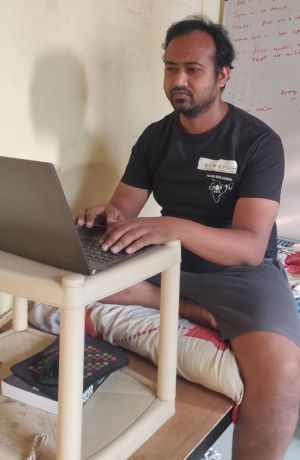 It is just word of mouth. Even if we are not able to help the students at a particular time, we do not give up on them. We talk to them and say, ‘Don’t worry. We will get you out of Ukraine and we will not give up.’

Now, I have created a broadcast group on Telegram and WhatsApp where I do broadcasts every 45 minutes and update them about the goings-on in Ukraine.

We have also told these students to uninstall every mobile app from their phones and just have WhatsApp and Telegram apps so that their phone batteries will last longer. The Telegram app is more important because it has unlimited followers unlike WhatsApp groups where there is a limit set for group members.

Right now, we have eight WhatsApp group for students stuck in Ukraine and one Telegram channel for them to communicate. These students, even if they are in bunkers facing Russian plane bombings, are following us right now.

We have also told the students if they manage to leave Ukraine safely to keep in touch and try to help others who are stuck.

Helping each other is the only way in this situation.

Right now, I have more than 3,000 Indian students on my Telegram group who are getting updates every 45 minutes. We have verified this group on Telegram. Our team is active non-stop.

Which is the place where the situation is bad for Indian students?

Right now, it is Sumy and Kharkiv. Sumy is worse because there is no help reaching the Indian students stuck in that city. We are trying our best to help these 600 plus Indian students but have been unable to do so till now.

In retrospect, do you feel these Indian students made a mistake by staying on in Ukraine and not leaving on time?

I do not want to criticise the government because I am an apolitical person.

If you see the Indian government’s advisory on February 15, you will find out that it says ‘If you want to leave Ukraine, you leave.’ It was not written that it was mandatory to leave Ukraine for Indian students.

Till February 26, classes were going on and these Indian students thought if they left during the ongoing course, they would have to suffer in their career.

What did the Indian embassy in Ukraine lack, was it empathy?

Yes, the answer is in your question. They lacked empathy.

If you create an account on Twitter and tagged us, we will go all out to help you. We will not see you as how many people follow you and how many social media influencers follow you. We will do everything in our power to help.

The sad part is that people are trusting our organisation more than India in Ukraine embassy. I feel the Indian embassy should not have spoken in diplomatic terms to students. They should have spoken to them with a more personal touch, which they didn’t do.

How long more do you think Indian students will be stuck in Ukraine?

I think in five days all Indian students will be out of Ukraine.

We were right in predicting the evacuation of Indian students from western Ukraine, so we feel it will take another five days for them to come out of eastern Ukraine.

Is it true, as one sees in social media posts, where people are saying Russian troops have kidnapped Indian girl students?

No, this is not true. I too saw those posts, but I have not come across any such case till date. If it was true someone would have surely written in our Telegram group.

How many Indians are missing in Ukraine now?

We had 130 missing initially, but now we have found most of them. Right now, only 12 Indians are missing in Ukraine that I know of and we are trying to trace them. We feel their phone batteries must have died because they are travelling by road.

I am hopeful we will find them soon.

What is the most satisfying thing about running this organisation?

This is the biggest high that a human being can get in his life.