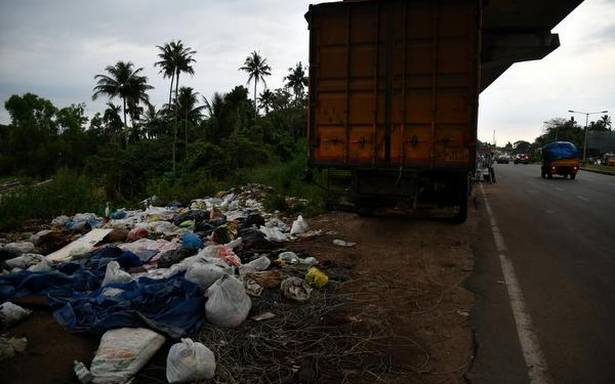 The increasing incidents of illegal waste dumping in Kalamassery municipality has come under the scanner of the State Level Monitoring Committee (SLMC) on solid waste management and the State Pollution Control Board.

Heaps of waste were seen dumped close to the Manjummel bund last week. SLMC chairman A.V. Ramakrishna Pillai had visited the site along with senior board officials on Sunday. The civic body was served a notice asking to explain why action should not be taken against it for the illegal dumping of waste. It was pointed out that the waste was posing a threat to the nearby waterbody. The municipality authorities have started removing waste from the area.

“Two days after this incident, we have now come across another case of illegal waste dumping near the waste collection yard of the civic body in North Kalamassery. The waste is being dumped near the area where lorries are parked. With no CCTV facilities available, the violators are having a free run. We will serve notice again on the municipality, citing the violation of clauses under the Solid Waste Management (SWM) Rules, 2016,” said the board officials.

The Kalamassery municipality continues to remain under the scrutiny of the SLMC and the board following repeated violations of the SWM Rules and Water Act. The local body was served a penalty of ₹2.77 crore as environment compensation for not complying with the provisions of the SWM Rules, 2016. The unscientific handling of waste at the yard in North Kalamassery had also caught the attention of the enforcement agencies.

As per estimates by the board, the waste generation per person daily under the municipality was fixed at 0.3 kg while the total waste generated was 21.23 tonnes per day. Only one-fifth of the waste generated was disposed as per rules. A major quantity of biodegradable waste is transported to the Kochi Corporation’s dumping yard in Brahmapuram. The civic body had failed to ensure bioremediation or capping of old and abandoned dump sites. The authorities should have identified suitable sites for setting up solid waste processing facilities, besides procuring sanitary landfill facilities, according to the board.