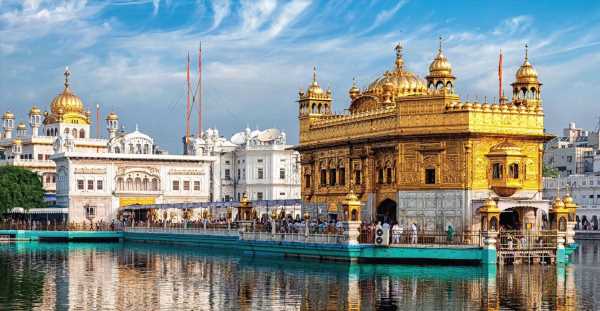 ‘I’m now living under threat, but life has to go on because as a soldier, you can’t run away from it.’

The operation is one of the most sensitive and controversial actions undertaken by the military.

In the summer of 1984, the Indian Army was ordered to remove Sikh separatists who had occupied the Golden Temple in Amritsar with weapons and ammunition under their leader Jarnail Singh Bhindranwale.

Bhindranwale and his supporters had turned the Golden Temple into a fortress and wanted a separate country — Khalistan and secede from India.

The Indian Army was given the task of removing the separatists from the Golden Temple dead or alive.

General Arun Vaidya, one of the Indian Army’s highest decorated military officers and the army chief at that time of Operation Bluestar, was assassinated two years later in Pune.

Gnereal Brar lives in a high security cantonment and survived an assassination attempt ten years ago while on a visit to London.

“Suddenly four strong Sikhs grabbed me. One attacked my wife and I had very little time to react. They tried to kill me with their kripans. Being a soldier, my first instinct was to fight back and not give in,” remembers Lieutenant General Brar.

“I kicked and they first slashed my back. They finally slashed my throat. They were all arrested and sentenced to imprisonment ranging from 10 to 15 years.

“After that I received a lot of threats to my life and it continues even now,” he tells Rediff.com‘s Archana Masih in the third part of the interview.

What are some of the memories of those three days of Operation Blue Star that have remained with you 38 years later?

That morning before we went in [the Golden Temple], I addressed all the troops. I went to each battalion starting at six o’clock in the morning. They didn’t know what was going to happen.

I said, ‘Tonight we’re going for an operation inside the Golden Temple. Don’t talk about it as it’s a secret. I want you to understand that it is an operation against our own people who have gone astray. Therefore it’s not that we are disrespecting the holiness of the shrine; the shrine is no longer holy, it has already been defiled [by Khalistanis who had occupied the Temple].’

‘However, if any of you don’t want to go in because of religious sentiment, please stand up. I can assure you, you will not be asked to take part in the operation and no action will be taken against you.

‘But remember, when we joined the forces, we swore that regardless of caste, creed, religion, we are Indians, and our Constitutional duty is to look after the independence and integrity of India.

‘We have been given an order and we have to carry it out, but in spite of that, if you are emotionally disturbed, you don’t have to go inside…’

I went from one battalion to the next and not a single soldier got up. When I reached the third battalion, a Sikh officer Captain J S Raina, got up. I said, ‘Don’t worry, son. You don’t have to go in’.

I said, ‘You’re a very brave officer. I salute you’.

I told his commanding officer that his platoon will be the first to enter the Golden Temple. I respect this officer’s courage.

It so happened that his platoon came under tremendous machine gunfire and he was badly wounded in his legs. He was bleeding heavily. I told his CO on the radio to evacuate him immediately.

But the brave officer refused. He crawled forward on his elbows. He refused to stop and we had to forcibly lift him and bring him back because his life had to be saved. He lost his legs.

This is the mettle of that officer. He received the Ashoka Chakra, the highest award for gallantry. I was at Rashtrapati Bhavan when he came to receive the Ashoka Chakra. His father and mother brought him in a wheelchair.

These are some of the memories of the brave men and the events that are a part of our history. 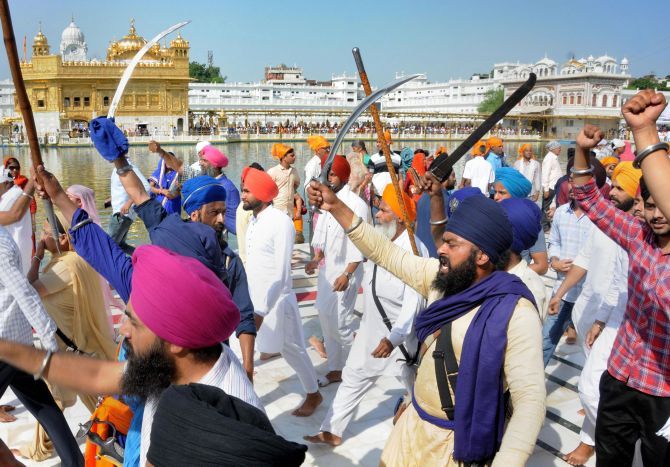 The security of retired Brigadier Israr Khan who participated in Operation Blue Star and also faces threat from Khalistanis, was further reduced by the UP government.

Brigadier Israr Khan is a very fine officer. He was given security and for whatever reason, it was withdrawn from him. I had messaged him to approach the government for security because there’s an organisation called Sikhs for Justice whose chief is based in America. They want Khalistan.

They’ve issued a threat and placed a bounty of 250,000 pounds on my head along with Brigadier Israr Khan, Colonel Raina and another commando officer.

The leader of this group has been addressing people on YouTube asking for information about our movements for a price of 250,000 pounds.

I told Brigadier Khan to approach the government with this information and I’m sure they would restore his security and perhaps even enhance it.

You have lived for nearly 40 years under the shadow of death. Have you ever been daunted? How have you dealt with this so admirably?

Listen, there are mostly good Sikhs, but a few bad Sikhs who believe that Khalistan must separate from India. It is ingrained in them.

I was attacked by them in London when my wife and I were walking on Oxford Street. It was 10.30 pm and we were returning to the hotel after dinner.

Suddenly, four strong Sikhs grabbed me. One attacked my wife and I had very little time to react. They tried to kill me with their kripans. Being a soldier, my first instinct was to fight back and not give in. The incident lasted maybe a minute-and-a-half or two minutes.

I kicked and they first slashed my back. They finally slashed my throat. I started bleeding and fell on the ground. Some bystanders came and the attackers ran. I saw them running away.

One of the assailants dropped his mobile phone and the London police got all their details from that phone. Within three months, they were all arrested and sentenced to imprisonment ranging from 10 to 15 years.

After that I received a lot of threats to my life and it continues even now.

One of the pro Khalistan groups sent a letter to the British queen that I should be declared a war criminal and not allowed into the UK.

These people’s minds are poisoned. They don’t realise that we cleaned up the Golden Temple that was defiled. But they still worship Bhindranwale for what he did. They think what he did was excellent. They occupied the Akal Takht and were living there. They brought in weapons and ammunition to wage a battle to get independence from India.

The people who attacked me in London were about 31, 32, 33 years old. At the time of Blue Star, they were just born and did not know anything about Blue Star, but they have been indoctrinated. They’ve been told this happened and they’re emotionally surcharged and wanting revenge.

So I’m now living under these threats, and life has to go on because as a soldier, you can’t run away from it. 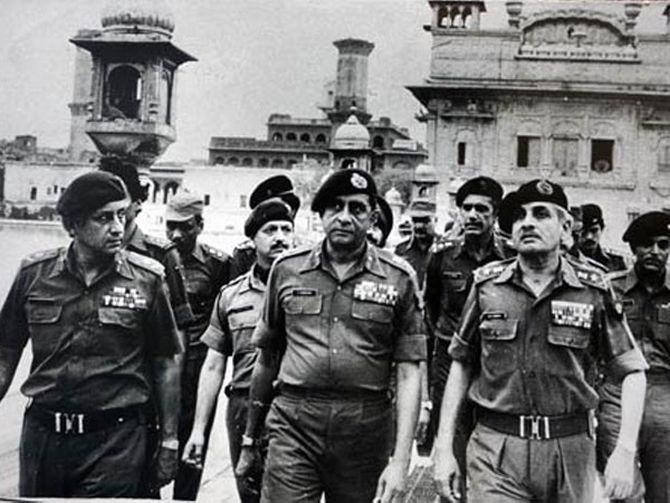 Sometimes, we all go through moments of weakness in our lives. Do you ever feel fear?

No, I’ve never had fear. In the ’71 War, when we were getting ready to attack the Baluch Regiment, I was giving orders to my whole group. We could see Pakistani positions. I was standing and there was an officer on my right, another one on my left. Suddenly someone opened fire from the other end, and the officer on my right died.

That means the bullet was not meant for me, it was meant for him. So you can’t run away. You can’t live with fear as a soldier.

If you’re a soldier, you have to put fear away from you.

If the worst has to happen to happen, you can’t stop it.