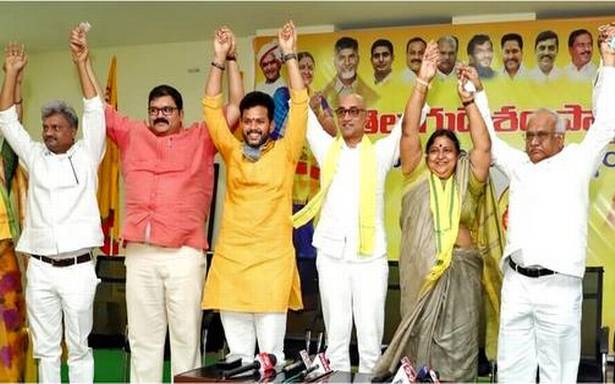 Party MPs blame BJP and YSRCP for the situation

Telugu Desam Party (TDP) MPs, during their campaign for the Tirupati Lok Sabha byelection, took potshots at the BJP-led Union government and the YSRCP government in the State over the Special Category Status (SCS) issue.

Lok Sabha members Jayadev Galla, K. Rammohan Naidu and Rajya Sabha member K. Ravi Kumar, during a meeting organised as part of the campaign here on Friday, they questioned the YSRCP for its ‘prolonged silence’ in both the houses of Parliament on the SCS that was promised to the State in the run-up to the bifurcation.

“The BJP has denied SCS to Andhra Pradesh, but promised the same to Puducherry during its campaign for the elections,” said Mr. Galla said, adding that the if party candidate Panabaka Lakshmi is elected, it would give the much-needed boost to the TDP in the Parliament to question the Centre.

Mr. Rammohan Naidu wondered as to how could the BJP, after claiming the SCS issue to be a ‘closed chapter’ for Andhra Pradesh, promise the same to Puducherry. He also sought to know why the YSRCP MPs had been silent over the issue in the Parliament.

Accusing the YSRCP government of violating norms and throwing the minimum decorum to wind by ‘misusing the official machinery and vilifying all constitutional bodies such as election commission, opposition parties and public representatives’,

Mr. Ravi Kumar asked why the ruling party was not showing a similar aggressiveness while taking up the issues pertaining to the State against the Centre.

Ms. Panabaka Lakshmi lamented at the ‘lack of progress of several Central projects’.

She blamed it on the ‘inability of the YSRCP government to bargain in favour of the State.