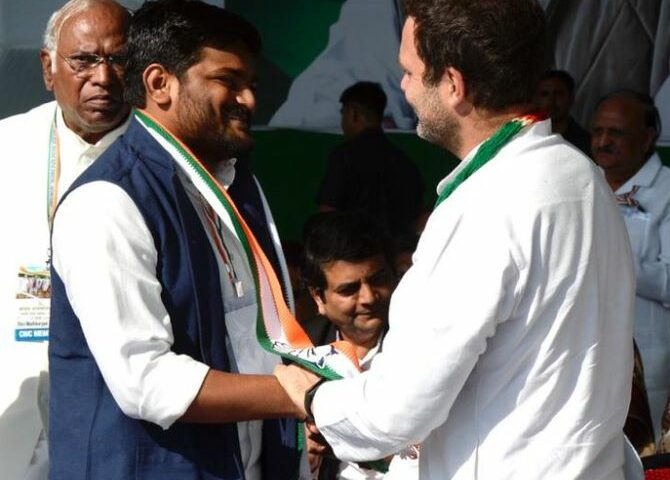 ‘I have always said that Hardik worked for his own interest and not for the cause of the Patidars.’
‘People didn’t believe what I was saying then, but now the entire community believes what I have always said.’

Lalji Patel — who heads the Sardar Patel Group, which Hardik Patel quit to form the Patidar Anamat Andolan Samiti and was once considered his mentor — lashes out against his former protege after Hardik joined the Bharatiya Janata Party. An interview with Prasanna D Zore/Rediff.com:

Now that Hardik Patel has joined the BJP, what happens to the Patidars’ agitation for reservations?

As far as the Sardar Patel Group is concerned, only two issues related to our agitation need to be sorted out. The state government should give jobs to the kin of Patidars who sacrificed their lives for our cause.

The second issue is withdrawal of criminal cases against 70 of our Patidar soldiers falsely implicated by the state government in various criminal cases.

The Sardar Patel Group has been fighting against the BJP government since 2016 for these two demands.

Once both our demands are met, we will call off our agitation. Let any government come to power, it makes no difference to us.

Why do you think the Gujarat government is not accepting these two demands?

They are waiting for the election announcement (Gujarat is scheduled to go the polls in December). They will accept these demands just before the election.

Today Hardik is joining the BJP. They (the BJP) will wait to see how many of Hardik’s supporters will join the Congress or AAP or BJP, but we will make use of this opportunity for the benefit of Patidars.

The BJP knows that the entire Patidar community will support them if they withdraw cases against our youth and give jobs to kin of those martyred during the agitation.

Now that Hardik Patel is joining the BJP, do you think he will press for these demands?

Hardik had dropped his weapons to fight for our cause soon after he joined the Congress. But the Sardar Patel Group has been, month after month, pressing for these demands in our every programme.

Our movement is not individual-centric and we will continue to fight for our cause.

Will Hardik Patel help your cause now that he is with the BJP?

Our fight has always been for the betterment of Patidars and whoever supports our cause will get the support of our community.

We have been fighting for it since the last six years and Hardik was just an ordinary soldier. At that time, he would call himself ‘Sardar’s Soldier’ (Soldier of Sardar Vallabhbhai Patel, independent India’s first home minister and Congress stalwart).

Our movement will not be affected just because one soldier quit it. We have thousands and lakhs of soldiers who are still willing to fight wholeheartedly for our cause.

But we still have lakhs of Sardar’s soldiers fighting against this government’s injustice to Patidars. These soldiers still hit the streets when we ask them for it.

You have always been vocal that the fruits of your agitation should be reaped by the entire community and not just an individual. Is Hardik Patel the target of your comments?

When he was in the Congress for three-and-a-half years he did not fight for our cause; jhe just kept badmouthing the BJP.

I have always said that Hardik worked for his own interest and not for the cause of the Patidars. People didn’t believe what I was saying then, but now the entire community believes what I have always said. Hardik has proved me right time and again.

Will the Gujarat government drop all the cases against Hardik Patel now?

All your sins are washed clean after you join the BJP.

Will he work for the two pending demands of the Patidars after he becomes a BJP MLA?

I have publicly declared that we will felicitate him if he fulfills our demands.

A lot of Patidar leaders have joined the BJP during the last six years, but none have worked for our cause. Hardik, once he becomes a member of the BJP, will follow their ideology.

He has tweeted recently calling himself ‘Modi’s soldier’. What does it mean? He will serve his master’s interest; not Sardar Patel’s ideology, whose descendant he clams himself to be. He will be subservient to the BJP’s ideology, not for our cause.

Will you be seeking Hardik Patel’s help in getting jobs for Patidar youth whose family members have been killed during the agitation and withdrawal of cases against those arrested?

We will be writing a letter to him in the next two days. We will remind him of his statements that the ‘BJP government is a killer’. Now, how will your joining such a government help us?

He will work only for the BJP and his political master. He has got nothing to do with the welfare of Patidars.

If the BJP doesn’t fulfill his ambitions, he will again start badmouthing them. This boy is just like that. He can’t belong to anybody.