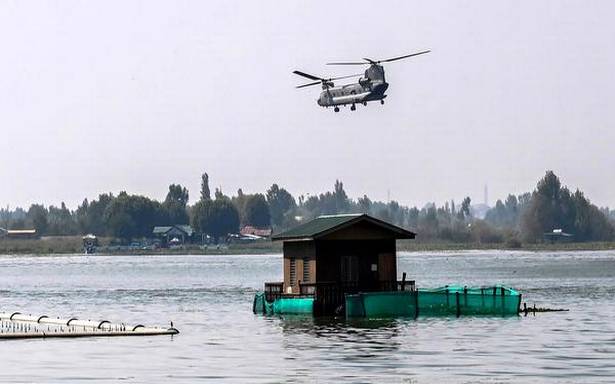 The show, which was inaugurated by Jammu and Kashmir Lieutenant Governor Manoj Sinha, was named ‘Give Wings to Your Dream’

After a gap of 14 years, the Indian Air Force (IAF) on Sunday mesmerised locals in Srinagar with the jets performing aerial acrobatics and awe-inspiring manoeuvring in the skies.

Hundreds of students drawn from different schools in the Valley enjoyed the IAF jets skilfully navigating and synchronising while hovering over the famous Dal Lake at the lawns of the Sher-i-Kashmir International Convention Centre.

The IAF show, which was inaugurated by Jammu and Kashmir Lieutenant Governor Manoj Sinha, was named ‘Give Wings to Your Dream’. It was organised as a part of the ongoing celebrations commemorating ‘Azadi ka Amrit Mahotsav’.

“It was organised to inculcate the spirit of nationalism among the Kashmir youth,” the spokesman said.

“I witnessed a spectacular air show by the IAF showcasing the capabilities and skills of the Indian Air Force, the audience was treated to sheer excellence,” Srinagar Mayor Junaid Azim Mattu said.

Meanwhile, the routes heading towards the boulevard in Srinagar were closed to traffic for the past two days.