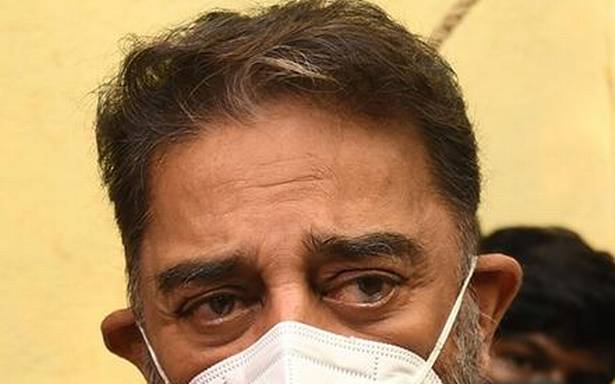 Makkal Needhi Maiam founder Kamal Haasan broke his silence on the future of his political career on Monday, firmly stating that he would continue to be in politics as long as he is alive and “the party would exist as long as there is politics in society”.

Mr. Haasan’s video message ended speculation over his political future after several prominent second-line leaders, including party’s vice-president R. Mahendran and general secretaries Santhosh Babu, C.K. Kumaravel, Muruganandham and others left after the party’s rout in the recent Assembly election, alleging that Mr. Haasan was “authoritarian” in his approach.

Despite high expectations, Mr. Haasan lost to BJP’s Vanathi Srinivasan in the Coimbatore South constituency by a narrow marginand the party’s overall vote share came down from 3.7% in the Lok Sabha election to under 3% in the Assembly election.

Few outgoing office-bearers alleged that though Mr. Haasan promised to usher in a “new political culture”, the politics practised by him was the complete opposite of what he preached. One of the outgoing general secretaries alleged that there was no transparency and clarity over where the party was getting its money from since March 1.

Mr. Haasan said the party created leaders and stars out of “unknown and barely known people” in society. “For some, this is authoritarianism. When these people were given big responsibility based on their talent despite being new in the party, they felt it was the ‘height of democracy’. Everyone knows how transparent I was in forming alliances and how I empowered them,” he said.

He added that it is a “good democratic practice” to take responsibility for bad results. “It is not democratic to locate a pit to fill the mistakes. The temporary people who were here will not understand that ‘Maiam well’ will not be depleted,” he said.

Those who have left the party would not be ‘allowed to contaminate the well’. “We will not let that happen again. We need not respond to unsubstantiated allegations to mask their mistakes. To those who are asking if we should keep quiet despite knowing the facts, I say, state the facts and argue but do not use foul language. From now on, individuals will not be allowed to reorganise the party’s infrastructure to suit their agenda. Those who are working for the party will be empowered. Everyone will see the mutated version of Makkal Needhi Maiam soon,” he said.