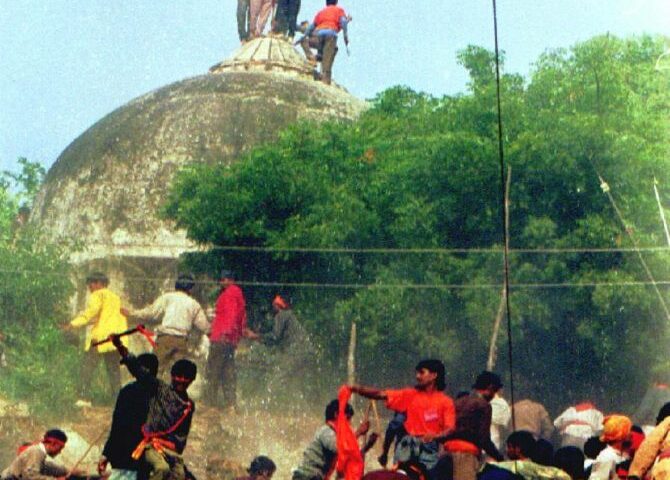 ‘At last, things have started changing in Ayodhya,’ says Hazaari Lal, one of the many kar sevaks who pulled down the Babri masjid on December 6, 1992. 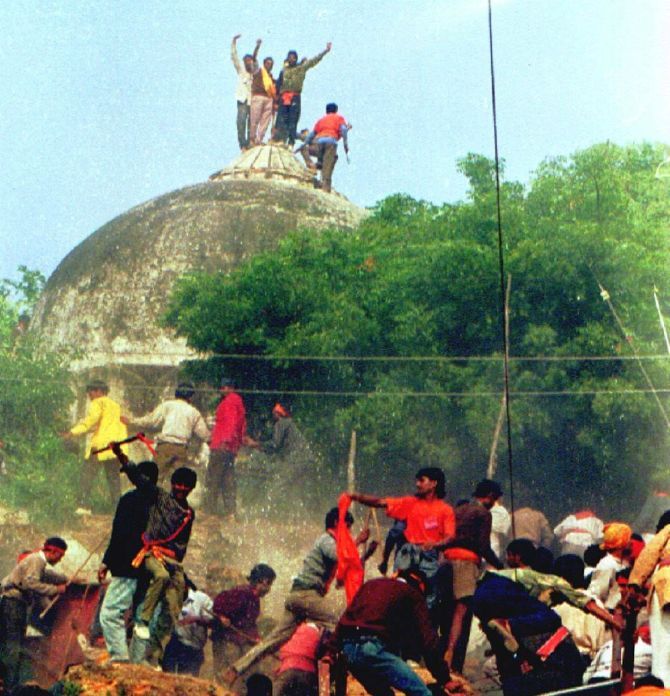 Hazaari Lal, a man in his 50s with a strong hand and a cataract in his right eye, is still on duty at Karsewakpuram, the Vishwa Hindu Parishad’s base camp in Ayodhya. He is now entrusted with showing visitors to Karsewakpuram, the biggest replica of the proposed Ram temple at the site, where he, along with others, had climbed the Babri masjid’s dome 25 years ago to bring it down.

Almost half-blind, Hazaari Lal also sells Ayurveda products, cow urine, herbal medicines and accessories like spiritual bracelets and other paraphernalia from the same compound that houses the replica. In his early 20s, he was one of the thousands of kar sevaks mobilised by the war cries of some of the tallest Bharatiya Janata Party leaders with the mission to pull down the mosque. Here he recounts the events and the day that shook India.

I arrived in Ayodhya on the night October 2, 1992, from my village in Shajaanabad district. My father had brought me here for the first time when the locks were opened. I, along with others, had already started the kar seva. Many of us who had come here were angered by Mulayam Singh’s statement daring anyone to set foot in Ayodhya (Ayodhya mein koi pair bhi nahin maar sakta).

I came walking to Ayodhya from my village. On December 6, 1992, many big leaders were shouting not to cause damage to the mosque. But none of us gathered there listened to them. We had come with the objective of demolishing the Babri mosque. Only if the mosque were to be demolished could a new Ram temple be built there. And we were going to achieve that at any cost.

Somehow, I managed to climb on top of the dome. We started breaking the dome. I fell when a portion of the dome collapsed; I remember lying there in the rubble. I had broken my back, jaw, arm and shoulder, and had injuries across my face. I was trapped for almost 10-15 minutes in the rubble before being pulled out. After about two hours, I was taken to a hospital in Ayodhya. The following day, I was shifted to a hospital in Faizabad where I was kept for a week before being arrested. I spent four days in Faizabad jail. Then, I was moved to Lucknow medical centre for treatment. After I was discharged, I was moved to the Lucknow central jail.

WIn a proper investigation, they should have asked us how we broke our limbs or suffered the kind of injuries they saw. But there was none of it. My case still lies buried somewhere.

We were visited by officers of the Central Bureau of Investigation in jail and hospital. Many others and I were told by a senior legislator (name withheld) not give our names as those who demolished the mosque. There were other much elderly leaders of the organisation who gave their names instead. And that is how they, instead of me and many others, were listed as accused by the CBI. The CBI officers failed to even visit many of us after we were discharged from hospital and released from jail.

In a proper investigation, they should have asked us how we broke our limbs or suffered the kind of injuries they saw. But there was none of it. My case still lies buried somewhere. I had once got a notice from the police station but after that nothing happened. I have asked for my case file many times but no one knows where it is.

I had come in the service of Lord Ram and believe that I should have also been listed as an accused by the CBI. I can’t sleep at night sometimes. I broke the mosque with my own hands but still could not become a part of the case. What objective will remain in my life if I am not included as an accused in the case for the service I have done for Lord Ram?

I will also give my testimony in court. I will speak for Lord Ram. The site where the mosque stood was the birthplace of Ram and will continue to be. I did not partake in demolishing the mosque for my household. I did it for Ram, for the nation, and for Ayodhya.

After securing bail, I came back to Ayodhya. When I went back to my village after a week, I was given a hero’s welcome. I spent six months in my village and decided to move back to Ayodhya where I have been since. I have no family and have kept my house in the village locked. When the temple is constructed, I will go back home.

At last, things have started changing in Ayodhya. The biggest parikrama in years happened recently in Ayodhya. During Mulayam Singh’s time, people were scared to come to Ayodhya. People feared they would be shot at any time. Now the time has come for a temple to be constructed.

Everyone is losing strength in fighting this case over Lord Ram.