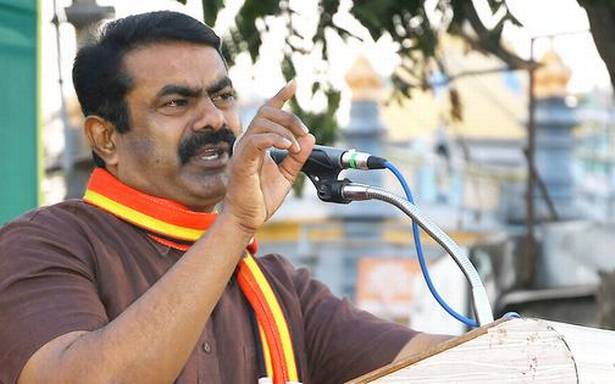 Naam Tamilar Katchi founder Seeman has said he is firm on contesting against DMK president M.K. Stalin in the 2021 Assembly election.

Accusing the DMK of being the root of all evils plaguing the State, Mr. Seeman on Thursday said that since Mr. Stalin had assumed that he would be the next Chief Minister “there is no need to fight against any sidekicks, but the main antagonist himself”. He would fight Mr. Stalin in any constituency and but wouldn’t contest in a second seat. “I am not afraid of a loss. Why should I contest a second or third seat?” he asked.

The film director-turned-politician, who has been espousing the Tamil nationalist cause, holds the DMK and its ally Congress responsible for the genocide against ethnic Tamils in the Eelam-IV civil war in Sri Lanka. “I have nothing against the DMK as a party. I have a personal anger against Karunanidhi and his family who kept quiet during the Eelam massacre. Also, Karunanidhi jailed me five times, in an attempt to silence my voice,” he told The Hindu.

He accused the DMK of hypocrisy on all issues that it had supported earlier when it was part of the Congress-led Central government, such as GST, NEET, NIA, among others. According to him, despite being in various Union Cabinets for 18 years, the DMK did nothing to ensure the State’s rights. He felt that if the DMK had replaced the AIADMK government after winning the Assembly bypolls, it would have supported the BJP-led Centre. He said he did not want to contest against the Chief Minister or his deputy, as people “will automatically want a change” from the AIADMK, which has been in power for nearly 10 years.

The NTK was not in favour of an alliance with the MNM, he said. “Kamal Haasan is my elder brother. He has said MNM is also a Dravidian party. I will keep my leader [LTTE chief] Prabhakaran’s photo on stage while campaigning. It won’t suit him and cause him unease. He is not an opponent for us in the electoral battle. Our main opponents are the DMK and the BJP.”