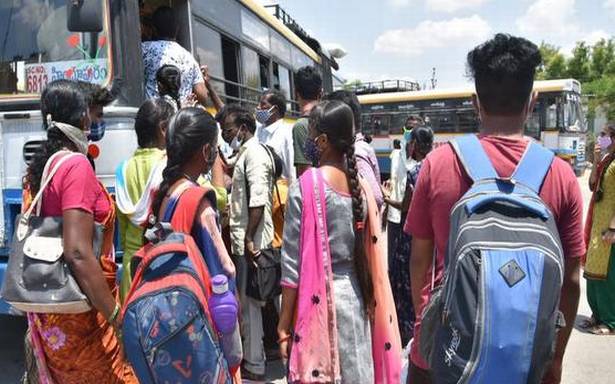 Hundreds of Intermediate students flocked the APSRTC bus stations in Anantapur and Kurnool on Monday in a hurry to leave for their hometowns either within the district or in neighbouring districts, after the State government’s announcement on Sunday that the Inter exams would be postponed indefinitely.

A large number of students from Anantapur and Kurnool districts reside in Guntur and Vijayawada pursuing Intermediate at residential colleges there, and they are expected to return by Monday night or Tuesday morning.

Many students reached the Anantapur bus station to head for Kadiri, Hindupur, Guntakal, and Kalyandurg. Many students vacated their rooms and rented houses in the colonies. “The second wave of the pandemic is likely to last till July, and we will have a lot of time to prepare at home. We need to remain safe too,” said Priyadarshini, a first year Intermediate student heading to Hindupur along with four of her classmates.

Many of the students expressed apprehensions that stringent lockdown measures would be implemented and it would become difficult for them to continue to live in their hostel rooms or rented accommodation in such situation, which is why reaching home was their first priority.