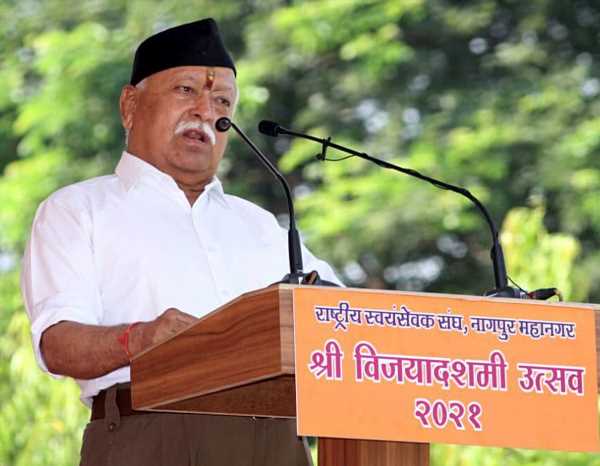 Since 2014, many of Mohan Bhagwat’s Vijayadashami speeches have acted as cues for government policy.
Aditi Phadnis reports.

Since 2014, many of the speeches have acted as cues for government policy.

Mohan Bhagwat has headed the Rashtriya Swayamsevak Sangh, which describes itself as a socio-cultural organisation, and is the parent body of the Bharatiya Janata Party, ever since the party formed a government in 2014.

The most important and eagerly awaited policy statement by the Sangh and its affiliates is the speech delivered by the chief on Vijayadashami day.

In his 2021 Vijayadashami address, he flagged two issues — bitcoin and OTT platforms — for greater government regulation.

As a marg-darshak (path-finder), the RSS has directed the government on the agenda of creating the ideal Hindu rashtra — sometimes directly, sometimes with a nudge.

When it feels its vision has not been translated by the government adequately, it has repeatedly returned to the theme.

For instance, almost every Vijayadashami speech has a reference to the existent education policy that continues to commit Indians to ‘foreign enslavement’ and prevents ‘Indian values’ from being inculcated in students.

Similarly, many speeches note with alarm, the changes in the demographic structure of India, both because of fertility and migration of ‘so-called minority communities’.

However, a content analysis of the speeches and policies framed by the Union government show that in many cases, while making policy the government takes a cue from the Vijayadashami speeches.

For instance, on September 25, 2014, soon after he became prime minister, Narendra Modi launched the Make in India initiative.

In his October 3, 2014, Vijayadashami speech, Bhagwat observed: ‘It is necessary that policies of the government should take the nation towards self-reliance and should encourage entrepreneurship among the people, but it is equally important for the people to encourage consumption of Swadeshi products. Our tendency of buying goods, even buying foreign-made statues of our Gods and Goddesses, simply because they are cheaper in price, needs to be abandoned.’;

The following year (2015), India imposed tough anti-dumping duties against vehicle components from China because ‘they were adversely impacting local industry’.

The duty stayed in place till October 2021.

In the summer of 2016 Modi launched the Stand Up India initiative, meant to provide bank credit to scheduled caste, scheduled tribe, and women entrepreneurs.

In his 2015 Vijayadashami speech, Bhagwat had observed with approval the launch of Mudra Bank and Jan Dhan Yojana, but had added: ‘An atmosphere of disappointment and lost faith, which existed a couple of years back, has evaporated. An atmosphere of expectations has come to the fore, generating a sense of optimism that such expectations shall be fulfilled. It has to be made sure that these positive vibes reach the last person in the row, by turning it into an actual experience by bringing about a real positive change in his life; his trust in the bright future of his own personal life as also of national should grow.’

In May 2017, the central government announced a new law, imposing a nation-wide ban on the sale and purchase of cattle for slaughter at animal markets, allowing cattle trade only for plowing and dairy production.

In a matter of months, the Supreme Court would strike down the law as unconstitutional. But the government took the cue from the October 2016 Vijayadashami speech by Mohan Bhagwat in which he strongly defended gau rakshaks — even though weeks before that, Narendra Modi had spoken disparagingly about such individuals and asked state governments to prepare ‘dossiers’ on the so-called cow protectors as ’80 per cent of them are engaged in illegal activities at night and become cow protectors by day’.

In December 2018, the Centre unveiled a new agriculture export policy.

In October 2017, Bhagwat observed: ‘Agriculture is the large sector in Bharat. Our farmer, who is by nature, feeds not just his family but the entire nation, is in pain today. He is depressed after facing the onslaught of floods and droughts, export-import policy, meagre pricing, mounting loans, and losing everything once the crop is ruined.’

‘Farmers should get the minimum price with a profit range over his investment so that he can bear his family expenditure and save some capital for the next years farming. The purchases of crops based on the support price will have to be ensured by the government.’

In 2018, the government also circulated a model law on contract farming on which one of the three currently contested farm laws is based.

The Vijayadashami speech in 2018 said the Ram Janamboomi temple was inordinately delayed and said clearly what the RSS wanted from the government:

‘The place of Janambhoomi is yet to be allocated for the construction of the temple, although all kinds of evidence have affirmed that there was a temple at that place. There is an obvious gam -plan of a few elements to stall the judgment by presenting various newer interventions in the judicial process’

‘The government should clear the path for construction of the grand temple through appropriate and requisite law.’

The Supreme Court ordered the disputed site to be given to the Ram Janambhoomi Trust in November 2019.

Narendra Modi and Bhagwat himself attended the bhoomi pujan in August 2020.

In 2019, Bhagwat said the world economy was slowing down and though the government’s sensitivity towards people’s interests and its prompt and proactive attitude would lead the country out of a so-called recession cycle (adding ‘the personalities leading our economy are competent enough’), the government is ‘compelled to take steps such as allowing foreign direct investment and divestment of industries.

Interpreting this as endorsement, Finance Minister Nirmala Sitharaman set a divestment target of Rs 2.1 trillion for the financial year 2020-21 in the Budget.

The sale of government shares in public sector banks and industries were both included in the most ambitious divestment exercise ever.

In the 2020 speech, Bhagwat called for farm policies that were propelled by ‘swa‘ (self).

‘The policies should be such that a farmer should be able to use these research findings and sell his produce without getting trapped, either in the profit aimed interpretations of those findings or sponsored research by the corporate sector or under the pressure of the market forces and middlemen, only then such a policy will be compatible with the Bharatiya view and be a truly Swadeshi agrarian policy.’

‘It is likely that incorporating these changes immediately within the present agrarian and economic system might not be possible. In that case, the policies should focus on creating a conducive environment to translate the suggested changes into reality,’ he suggested.

The government is yet to act on this.