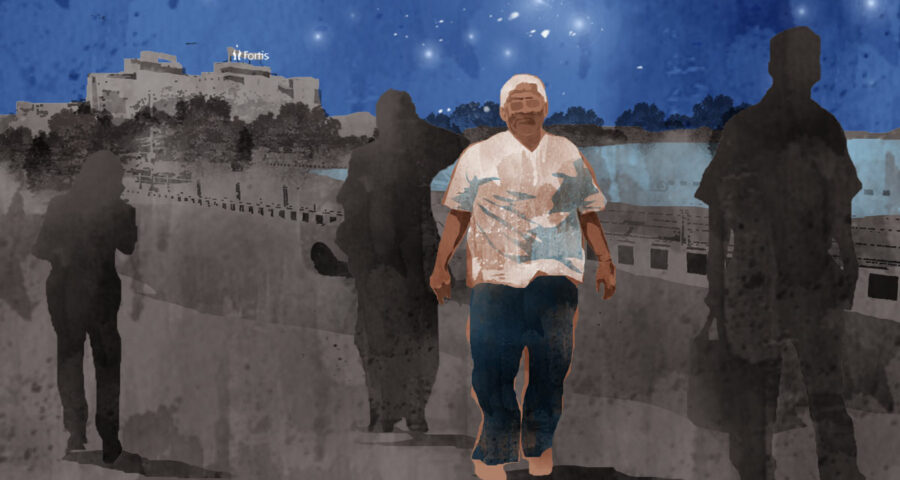 ‘I have to take better care of myself.’
‘I was lucky that the cancer was diagnosed at a very early stage.’

Six years ago, I lost my wife.

It began as a normal day.

We lived in a village called Panickanadarkudieruppu in Tamil Nadu, which is around 607 kilometres from Chennai, where I now live.

We had breakfast together.

Suddenly, my wife of 32 years collapsed in pain.

I immediately realised this was not something we could handle ourselves and rushed her to the hospital. I was not worried; I knew she would come back home.

Her post-demise medical report said she had been suffering from a heart problem for four-and -a-half years. I was devastated that we were did not know about it while she was alive; that we only came to know after she passed away because of a severe heart attack.

Despite being someone who is casual about my health — I believe in enjoying life; I also smoke, drink and am overweight — her death shook me in more ways than one. After that, I made it a point to have a complete body check-up every year.

The reason was my daughter; she was young, shattered by the loss of one parent and I did not want her to lose the other until she was on her feet and completely independent.

In 2020, that changed. Corornavirus struck. And we all know how bad that time was. Even thinking about a hospital, forget going to one, gave me the jitters.

When the pandemic situation improved, I knew I should get my annual check-up done. But I just could not bring myself to do it. I was still not comfortable with the idea of going to a crowded hospital.

Even today, I wear a mask at all times and wash my hands regularly.

But my 80-year-old mother kept insisting I get a complete check-up.

After much dilly-dallying — I resisted for months — I finally landed up at the Fortis Malar hospital in Adyar, which is one of the biggest hospitals in Chennai.

Located in a fairly peaceful area on the banks of the Adyar river, it faces the Theosophical Society and the Kalakshetra Foundation. The former was established in Adyar in 1882 and the latter moved to its present location in the 1960s. Each institution owns a vast area that pays rich tribute to the beauty of Nature.

Beyond this gorgeous feast for the eyes is the Bay of Bengal.

Even if you are stressed, you can’t help relaxing in the face of all this natural bounty.

The hospital was not crowded, which made me feel a little better.

When I told the lady at the reception that I wanted to do a senior citizen’s health check-up, I was asked to go to the first floor.

There, I was asked fill a form. My blood and urine were taken for testing, followed by an X-ray and a full body scan.

The results, a soft-spoken lady doctor told me the next day, were a cause of some concern. My haemoglobin, vitamin D and iron counts were below normal.

What was most worrying, however, was the fact that my bile duct was dilated; she recommended I see a gastroenterologist.

I was exhausted by the time I reached home. 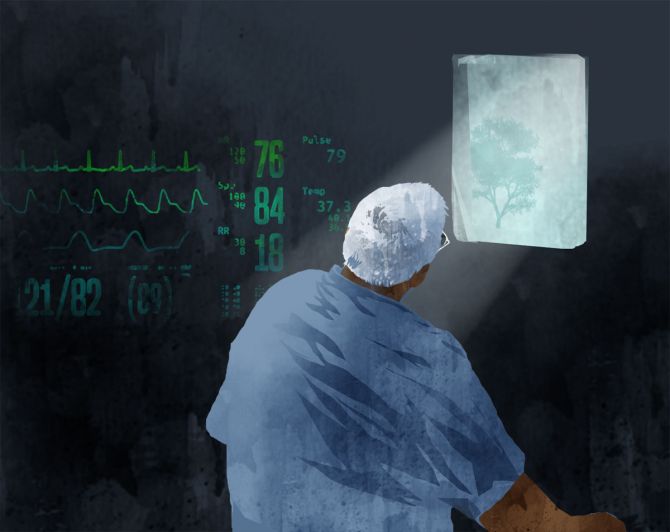 The next day, I met Dr Thirumoorthi N, a specialist in gastroenterology and hepatobiliary (related to the liver, bile duct and gallbladder).

A very affable gentleman, he explained there might be a blockage in my bile duct; in order to confirm it, he said he needed a better picture and asked me to get an MRI scan.

Unfortunately, I could not get it done at Fortis; though it is one the biggest hospital chains in the country, the Adyar branch does not have an MRI machine.

Instead, I went to a well-known lab, Aarthi Scans And Labs where the rate is lower if you do your tests at night. So that’s what I did.

When I showed the results the next day to Dr Thirumoorthi, he said, “Apart from the bile duct, the pancreatic duct is also dilated. Something is blocking them both. I will have to put a camera down your throat for a better look.”

But he didn’t give up. He patiently explained that I would be sedated for the procedure.

Two days later, in the evening, I got myself admitted. I slept well that night.

The next day, they took me to the room where endoscopies are done. They told me they would be injecting a fluid into my intravenous feed; that I would feel something cold spreading though my body and then I would lose consciousness.

I did feel cold.

The doctor took a look, first with a front camera and then a side camera. It looked like a tumour. He conducted a biopsy and sent the sample to a lab outside the hospital.

He met me the next evening with the results. “You have cancer; it has to be surgically removed immediately. I want you to meet our Chief Surgeon Dr Neelamekam.”

Doctor Neelamekam Thoppa Kapali, head of surgery (gastro and minimal access surgery), turned out to be a bespectacled rock star.

He does not believe in beating around the bush; at our very first meeting, he told me firmly that he had seen the reports and surgery was my only option.

I never asked what kind of cancer I had; I did not want to know.

He wanted to do the surgery the coming Tuesday. I told him I preferred a Wednesday; I believe Wednesday is lucky for me. He agreed. Wednesday would be our D-day.

His assistant, Doctor Abinaya Ramachandran, who is a surgeon as well, then took over. She said, “I want a CT scan done before the surgery so you should get admitted a day earlier.”

The CT scan technician explained that I first needed a urea and creatinine blood test; based on those result, he would know if he could do a CT scan. Once again, I got my blood

The next day, I admitted myself in the hospital after paying an advance of Rs 4.5 lakhs.

Then, I collected my blood report and went for the CT scan.

Dr Abhinaya explained that a MRI would focus on the soft tissue and the CT scan on the hard tissue. She wanted a clear picture of the inside of my body before the surgery began.

I was told that, after midnight on Tuesday, I should not eat anything or drink anything.

The next morning, at 8, I was taken to the operation theatre.

They told me they needed to insert a needle in my back so that they could use it to pump in medicines post surgery.

After many a miss, they managed to find a vein. It was painful, but they soon removed the needle and inserted a soft tube.

Before I knew it, the anaesthesia had done its work. I lost consciousness.

When I came to, it was 5 pm. I was in the intensive care unit. My sisters and daughter told me the surgery, which had lasted six-and-a-half hours, had been successful.

I had been given one bottle of blood when I was in the ICU.

After six days, I was shifted to a room.

The IV continued. Three days later, I was told I could go home provided I continued with the IV fluids for three more days.

Dr Neelamekam told me the tumour had been autopsied and the results were “all clear”; they had cut out all the cancerous elements. I had nothing more to worry about.

My sojourn at the hospital cost Rs 10 lakhs. My office mediclaim — I do not have a personal one — paid Rs 2.6 lakhs; that helped a little.

By the time we left the hospital, darkness had fallen.

The hospital’s pharmacy is near the gate.

The bill for the IV fluids that I would need to take for the next few days came up to Rs 49,000.

I was told I had to pay cash and would not get a bill.

Now, I have to take better care of myself. I was lucky that the cancer was diagnosed at a very early stage.

I have been advised to eat small meals — eight to 10 a day. And take long walks.

I am ready for my life to return to normal.