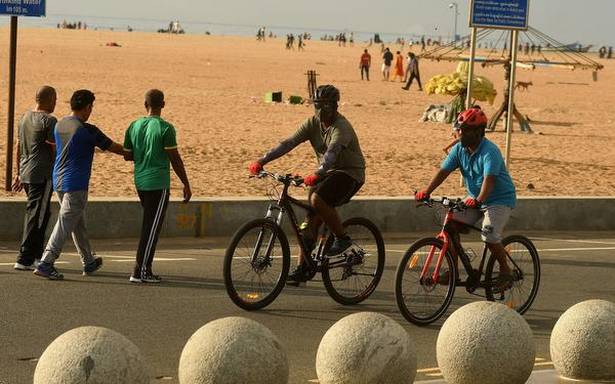 Chennai is competing with 75 other cities across India and as per the latest count it is in the top position with the maximum number of registrations (Ajmer, Belagavi, Lucknow and Chandigarh are among cites that are giving Chennai a tough fight). The city that covers the maximum distance in these two events will be declared winner and recognised by the Ministry, which means greater the number of participants,the greater the chances of being on the top.

All that one has to do is register for the challenge by downloading STRAVA app and sign up for ‘Freedom2Walk’ or ‘Freedom2cycle’ event. Strava is required to track the rides/walks and it should be linked in the All for Sports (AFS) portal to make sure the tracked exercise is counted in the city challenge.

Such campaigns to promote green mobility is not new. In June 2020, the Smart Cities Mission launched India Cycles4Change Challenge to encourage cities to empower more people to access and use cycles, thereby pushing for infrastructural interventions to ensure road safety and personal security.

Freedom to Walk and Cycle challenge is an extension of the campaign, with walking as a new addition. The challenge is being conducted to celebrate 75 years of Independence and to push citizens to take a new year resolution to work towards a healthy lifestyle.

For Chennaiites, this is another opportunity to push the civic body to introduce and improve the cycling and walking infrastructure. The permanent ramp that was constructed recently on the Marina beach is an example of citizens and government working together to create inclusive spaces.

The Namma Chennai app is going to have a feature called ‘Road Sharing’ that will inform the public about amenities available at various public places.

Christy Leema E, public engagement and partnerships officer at Chennai Smart City, says to drum up support from various fitness groups, they have been holding meetings. Notifications were sent to all users of SmartBikes. “We are expecting around 5000 registrations,” says Christy.

The top 10 participants from Chennai will be honoured by the GCC.

‘We want citizens to take up projects in their neighbourhood’

Sneha Divakaran, deputy commissioner, Education, Greater Chennai Corporation, who also oversees public engagement initiatives, says the main objective behind Veedhi Vizha is to encourage people to get themselves into any fitness regime.

“Once citizens’ participation is ensured, we get better feedback and that helps us to plan various people-friendly projects,” says Sneha.

The all-women night cycle rally held in September 2021 was an attempt to gauge the safety of women cyclists that exists and work on improving infrastructure where it’s grossly inadequate.

One of the most fervent pleas from cyclists has been to create dedicated lanes to offer them a safe and shared space. Sneha says that is a policy decision and needs discussion with various stakeholders. “Meanwhile what we can ensure is make lanes safe by ensuring there are no potholes or other obstructions and providing street lights,” says Sneha.

For pedestrians using pavements, she says, placing bollards was an attempt to discourage motorists from parking on them. Towards encouraging citizens to embrace a healthy lifestyle, Sneha says GCC is turning OSR lands into parks with minimal infrastructure like a walkway, some trees and benches. “This is being done under Namakku Naame Thittam, wherein the public can also take up projects in their neighbourhood,” says Sneha.

She says both Singara Chennai and Nalmigu Chennai focuses on playfields and parks. “Based on public consultation the GCC is currently developing 28 parks and eight playfields,” she adds.