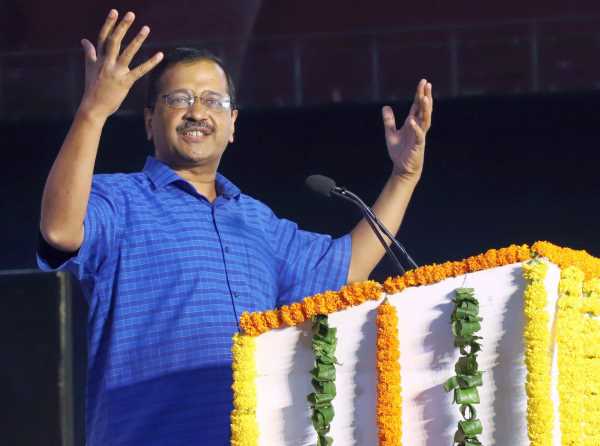 AAP is working on its new strategy to build a strong organisational set-up with leaders from all sections of society, reports Nitin Kumar.

The Aam Aadmi Party’s Punjab assembly election sweep seems to have changed the political environment in neighbouring Haryana, where local leaders across parties are lined up to join AAP.

Amid the influx, the AAP is working on its new strategy to build a strong organisational set-up with leaders from all sections of society.

The AAP has been trying to find a foothold in the state since 2014 — through two Lok Sabha elections and the 2019 assembly election — but all in vain.

In 2019, the AAP contested four Lok Sabha seats in coalition with Dushyant Chautala’s Jannayak Janata Party but drew a blank (Chautala, whose party is in alliance with the Bharatiya Janata Party now, is deputy chief minister).

It fielded candidates in 46 of the 90 assembly seats but finished behind NOTA (none of the above) with a 0.48 per cent vote share despite sharing borders with Delhi, where it has been in power since 2015 whereas, in Punjab, it was in Opposition from 2017 to March this year.

According to political analysts, the lack of strong local leadership has been AAP’s biggest drawback in Haryana.

Naveen Jaihind, a Brahmin, the party’s face in the state, failed to find favour with the politically dominant castes — Jats, Yadavs, Sainis, and Punjabis — and a large section of AAP’s traditional constituency of educated urban voters.

“Politics in Haryana is caste-based and the AAP did not have leaders from the politically dominant communities. But, this time the party is looking beyond its traditional voters to these dominant castes,” said Kushal Pal, state coordinator, Lokniti, and head of the department of political science, Dayal Singh College, Karnal.

It also aims to cash in on the resentment among the masses against the ruling Bharatiya Janata Party and JJP following the farmers’ protests, rising unemployment, and inflation.

The Congress in Haryana, like in Punjab, is marred by infighting and indecisiveness.

It has even failed to put in place an organisational set-up at district and block levels.

“The AAP will get the benefit of anti-incumbency against the ruling BJP-JJP government in the state and the Congress’ factionalism,” Pal said.

The AAP is positioning itself as an alternative to the BJP and the Congress. It aims to woo middle-rung leaders of other parties who are upset with the way dynasts corner the seats. More than 60 per cent of the MLAs in Haryana are from a political background with a generational foothold in the state’s politics, according to political experts.

With no baggage of corruption and dynastic politics, the AAP promises to provide better leadership, based on education and work with zero tolerance for corruption and nepotism.

Most of the prominent leaders in Haryana are charged with corruption, which AAP aims to substitute.

The party is also eyeing bureaucrats and sports personalities.

According to sources, IAS officer Ashok Khemka and many other bureaucrats are in touch with the party leadership.

This came just after the Haryana government’s decision of restoring the 3 per cent quota for sportspersons in Group C government jobs.

“AAP’s move to felicitate sportspersons is to woo a large number of youngsters who aim to secure jobs through the sports quota,” Pal said.

It made its stand clear on the Sutlej-Yamuna Link canal and the Union territory of Chandigarh issue to counter the Congress and BJP’s claims of AAP not resolving issues.

AAP’s Rajya Sabha MP Sushil Gupta, who is in charge of Haryana affairs, while taking a hit at the BJP, said: “If the BJP is not able to do it, then in 2025, we will solve the SYL issue and the matter of Chandigarh as well, as we will be in power in both states (Punjab and Haryana) by that year.”

Gupta added: “Punjab’s victory has infused confidence into the party in Haryana. Since then, over 150,000 people have taken AAP’s primary membership. Kejriwal is about to launch ‘mission Haryana’ soon.”

The AAP is planning to contest the upcoming municipal polls on the party symbol to boost confidence in its cadre.

Chiranjeev Rao, a Congress MLA from Rewari, while refuting AAP’s increasing prominence, said: “There is a huge vacuum in AAP and those not getting the ticket from the Congress and the BJP will definitely look to the party, but a lot depends on its performance in Punjab and the upcoming elections in Gujarat and Himachal Pradesh.”

The party wants to make inroads into the state by wooing the Dalits, who comprise nearly a fifth of Haryana’s population.

Without any strong Dalit leadership, their votes get distributed among parties.

By making Tanwar its Dalit face, the AAP is trying to balance the ruling BJP and the Congress, which have prominent figures from the community like former Union ministers Ratan Lal Kataria and Kumari Selja, respectively.

However, Tanwar said: “Babasaheb talked about casteless society and we are working to achieve his vision. The AAP, while breaking barriers of caste, creed, region, religion, and language, wants to create a new vision. But we will definitely fight for the marginalised. So, I don’t think that there is any need for strategy.”

Wherein, Congress MLA from Badli Kuldeep Vats said: “Former Congress leaders going to AAP will not have any impact on the state’s politics. They have no prominent face to represent Haryana. AAP will disappear into thin air.”

But AAP believes that it does not need faces in Haryana but good credentials.

“This is a party of the common man and only good credentials matter,” Gupta said.