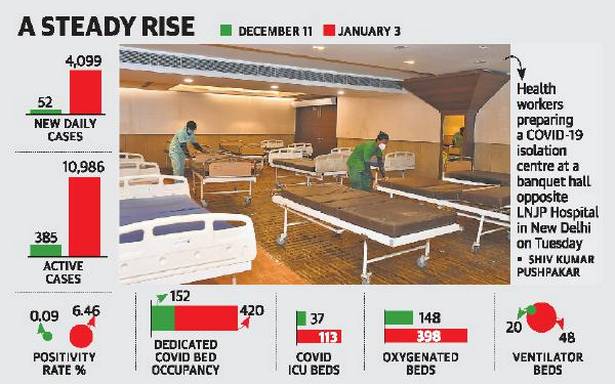 Capital’s case fatality rate stands at 1.73%; use of ventilated beds doubled between Dec. 11 and Jan. 3

With the number of daily COVID-19 cases and positivity rate continuing to surge across the Capital, the occupancy of hospital beds under various categories has been at its highest in the past fortnight, according to government data.

The occupancy of COVID and oxygen-supported beds increased by 2.5 times, ICU beds by over three times and ventilators by two times during this period. However, Deputy Chief Minister Manish Sisodia said 94.1% of the total 9,042 beds for COVID-19 were vacant as of Tuesday.

According to Health Department records, 420 dedicated COVID beds were occupied on January 3 opposed to 152 on December 11 and the occupancy of ICU beds has gone up to 113 from 37.

Ventilator bed occupancy was recorded at 48, up from 20 and that of oxygenated beds at 398 compared to 148 during the 14-day period.

According to government sources however, when it came to ventilators, only 14 of them were in use.

Health Department data show that COVID bed occupancy had breached the 300 mark on January 2 with 307 such beds being occupied, followed by a sudden surge in the next 24 hours bringing the bed occupancy to 420 by the next day.

COVID ICU bed occupancy fluctuated in two digits throughout the 14-day period before reaching 65 on January 2 and breaching the 100 mark within 24 hours and settling at 113 on January 3.

Oxygen-supported beds progressively inched closer to the 300 mark during the period before breaching it within 24 hours between January 2 and 3 and rising to 398, up from 293.

As of January 2, when compared to the rest of the country, Delhi’s case fatality rate was higher and recovery rate lower.

Tests in Delhi per million were significantly higher than nationally at 17,29,958 tests per million compared to the national figure of 5,03,661 per million.

Seeking to reassure Delhiites, Mr. Sisodia said experts believe that the symptoms of Omicron are very mild and the infected people are recovering very quickly. He appealed to people to opt for hospitalisation only in case of a dip in oxygen levels.

“At present, Delhi has reported over 11,000 COVID cases of which only 350 people are hospitalised and only 124 patients are on oxygen beds. There are seven persons who are on ventilators as of now,” he said.