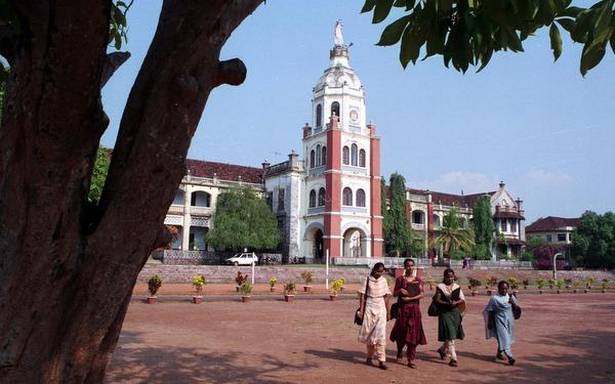 Over the years, the institution produced two Chief Ministers and a number of writers, artists and other luminaries

The year was 1922 and the occasion a momentous one. V.V. John, former Vice Chancellor of the Jodhpur university, had just enrolled in a junior intermediate class of 125 students that functioned from a multi-storey building in the vicinity of the Parayil Church in Changanassery. Feeling slightly nervous, he proceeded straight to a classroom where a man called Kulandaiswami Pillai was teaching English.

“We admit boys till the benches break,” remarked Mr. Pillai, welcoming the youngster to his class.

The occasion marked the beginning of the iconic St. Berchmans College, which has lived through a century to emerge as a premier institution of higher education in Central Kerala.

Calls for a college by the Catholics in Travancore were growing when Monsignor Charles Lavigne of France, the first resident Bishop (Vicar Apostolic) of the Syrian Catholic diocese of Changanacherry, laid its foundation stone in 1895. However, it took 25 years before Bishop Mar Thomas Kurialacherry, the first native Bishop of the Syro-Malabar church, opened the institution on June 19, 1922.

Rev. Mathew Purackal, the first postgraduate from the diocese of Changanacherry, was appointed the first principal.

Over the years, it has undergone several progressive changes to become the first college in the State to secure autonomous status in 2014. The institution now offers as many as 19 Post-Graduate courses, 17 undergraduate courses, M.Phil in three departments and doctoral programmes in 10 departments. It currently hosts about 3,200 students and 170 teachers across 18 departments, besides 80 non-teaching staff.

To date, it has produced two Chief Ministers, Oommen Chandy and P.K. Vasudevan Nair, a number of writers and artists, including Muttathu Varkey, Vishnu Narayanan Namboothiri and Prem Nazir, besides a long list of legal luminaries, bureaucrats and academicians such as Justice Syriac Joseph, C.V. Ananda Bose, Raju Narayana Swami, Jancy James and B. Ekbal.

Marking the beginning of the institution’s centenary celebrations, Metropolitan Archbishop Mar Joseph Perumthottam will lead a blessing ceremony to be performed at the college chapel on June 19 morning. Higher Education Minister R. Bindu will inaugurate the one-year-long celebrations at a function to be held on the college campus in the afternoon.

Meanwhile, the college management intends to roll out a slew of programmes in the centenary year, including scholarship for 100 students and adoption of five villages in Changanassery taluk, besides opening an interdisciplinary research department.

“The plans also include renovation of the Kavukattu Hall (the heritage auditorium), upgrading classrooms with Idigital technology, building a centenary hostel among others”, said college principal Rev. Reji P Kurien.