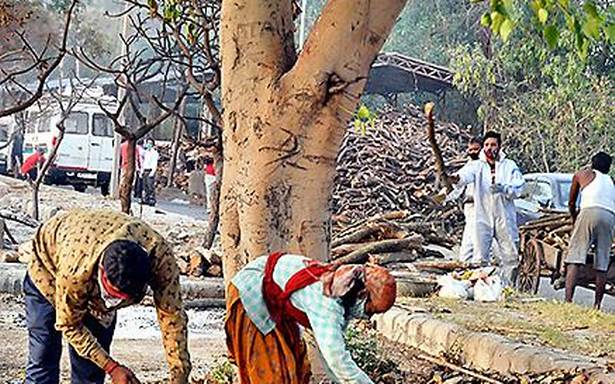 The Hindon Cremation Ground in Ghaziabad is struggling to handle the surge in bodies of suspected COVID-19 patients after the electric furnace, which has been operating around the clock, temporarily stopped functioning on Friday.

Since then, the wait time for electric cremation has gone up to at least three hours. Some families were forced to carry out the last rites of their loved ones on footpaths.

Though the Ghaziabad district administration claimed there were only two COVID-related deaths in the city on Sunday, the employees at the crematorium said they had handled around 40 bodies daily for the past few days.

Vikas, operator of the electric crematorium, said the furnace has been fixed but it takes two hours for one body to be processed, and there is only one shade available for another body in queue. “We have issued tokens and approximate time to remaining bodies because they cannot remain in the hot weather for long,” said Vikas.

The Ghaziabad district administration said it is planning to instal one more furnace to meet the demand.

“We have ordered regular sanitisation at the crematorium area and temporary parking has been developed. We have deployed employees at the site to take care of the facilities. The electric crematorium has been repaired but it has its functioning capacity,” said a senior official with the district administration.

To take the pressure off the furnace, the Ghaziabad Municipal Corporation has constructed nine platforms at the crematorium site.

But they are lying unused as they are not facing the “right direction”.

“The platforms were constructed in a hurry without consultation with the priest at Hindon. The platforms are located in the wrong direction and under a Peepal tree, which is considered inauspicious for performing last rites,” said Sagar Kumar, a caretaker at the crematorium.

“Around 12-18 bodies would come here daily, but there has been a sudden surge. From April 15-18, 180 bodies were cremated at Hindon. Due to scarcity of space, people have been forced to cremate bodies on footpaths,” said Mr. Kumar.

Vineet Singh, who lives in Surya Nagar, said he visited the crematorium on Sunday to perform the last rites of his father-in-law who died of COVID-19. There was no facility for cremation as per COVID protocols. The body was cremated on an open platform as there was a wait time of over three hours.