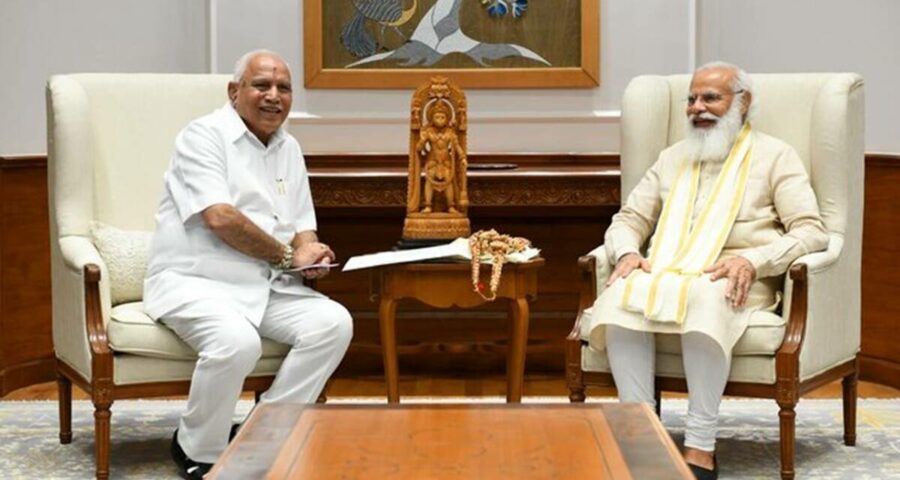 Interestingly, Yediyurappa did not get an appointment with Home Minister Amit Shah and was called back to meet the Home Minister after he had reached the airport to board his private flight to Bengaluru with his younger son B Y Vijayendra and his associates. Veteran BJP leader B S Yediyurappa’s days as Karnataka Chief Minister may be numbered as his government completes the second year of its tenure on July 26.

The need for a change of guard was suggested by the party leadership during Yediyurappa’s visit over the weekend to New Delhi to meet Prime Minister Narendra Modi and party president J P Nadda, among others, sources have told The Indian Express.

“It’s just a matter of time…He (Yediyurappa) wanted the party leadership to choose a successor but it will be with his consent,” said a source. “The central leadership seems to have left it to the Chief Minister to decide the time of his exit,” said a senior party leader.

Though Yediyurappa, 78, himself denied a leadership change, his statements suggested otherwise.

“They have all asked me to strengthen the party. Even PM Modi said the same thing yesterday and Naddaji and Rajnath Singhji and today Amit Shahji said the same thing. I have said that I will not retreat and that I will work day and night to bring the party back to power. I told them that I would work to help the party win 25 seats again in the next LS polls,” Yediyurappa said.

In another sign of the shifting wind, Yediyurappa announced the convening of the BJP legislature party meeting on July 26.

This is significant since he has been reluctant to do so for several months now amid discontent in the ranks over his perceived style of functioning and the alleged interference in administration by his family members.

Sources said Yediyurappa received signals that he should hand over the reins on account of his advancing age, health concerns and the need for an image makeover.

For, he has been besieged by allegations of corruption revolving around members of his family allegedly misusing the CM’s office.

Interestingly, Yediyurappa did not get an appointment with Home Minister Amit Shah and was called back to meet the Home Minister after he had reached the airport to board his private flight to Bengaluru with his younger son B Y Vijayendra and his associates.

Sources said Yediyurappa is keen to see Vijayendra accommodated in state politics before he is replaced.

For the record, though, Yediyurappa denied any change. “Until now there has been no discussion on an alternate leadership…They have now given me the responsibility of strengthening the party. The leadership has asked me to continue as CM for now. Whatever they say has to be followed. There is no question of change at present,” Yediyurappa said in Bengaluru Saturday.

On June 6, he had said: “As long as the Delhi high command has confidence in me I will continue as the CM. The day they say ‘enough of Yediyurappa,’ that day I will resign and work for the development of the state.”

On July 8, a special court rejected a private complaint by activist T J Abraham seeking an investigation into alleged corruption and money laundering by Yediyurappa and eight others on the grounds that a sanction for investigating the CM was denied on June 23 by the then state Governor Vajubhai Vala.

Despite this, the CM has been continuously hemmed in by allegations of graft – both past and present. Indeed, the court indicated that there is some substance in the complaint that merits an investigation and that it was being rejected on account of denial of sanction.

The allegations pertain to alleged bribes amounting to over Rs 12 crore for contracts, including Rs 5 crore received last year by companies linked to a grandson of the CM from multiple Kolkata shell companies.

With Vala being replaced by former BJP Union Minister Thawarchand Gehlot on July 6, there is apprehension in the Yediyurappa camp that a fresh proposal for prosecuting the CM may be sent to Raj Bhavan saying that more material had emerged to warrant an investigation.

On July 11, the opposition Congress had alleged that the appointment of a chairman of the Karnataka State Pollution Control Board in December 2019 was done after a a bribe of Rs 9.5 crore to persons close to the CM.

The latest timeline being put out by Yediyurappa’s rivals in the BJP for his exit as CM is between August 15 and October. He was forced to quit as CM in 2011 after serving since 2008 when the Karnataka Lokayukta named him in a report on illegal mining in the state. He was also prosecuted by the CBI but the case was quashed by a sessions court in Bengaluru.