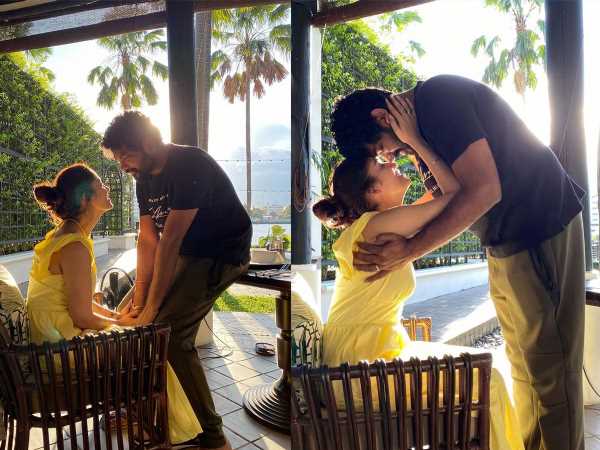 The film maker Vignesh Shivan and lady superstar Nayanthara married on 9th June after being in a relationship for over seven years,  at Sheraton Grand, Mahabalipuram in the presence of close friends and family. Shah Rukh Khan, Rajinikanth, Suriya and others attended their wedding. After the two got married, as promised, the duo met reporters in Chennai. On Monday,  Vignesh Shivan shared photographs from their honeymoon in Thailand. He also shared an unseen wedding pic where  he is seen giving a romantic pose with his wife Nayanthara.

The newly wed couple are celebrating their married life with a honeymoon in Thailand. On Monday, Vignesh shared romantic photos with the caption, “In Thailand with my Thaaram.”

He also  shared a handful of sun-kissed pics of them relaxing at a hotel.  In one of the pic,  Nayanthara is posing solo on their getaway. While she wore a yellow dress, Vignesh  Shivan was seen in a casual black T-shirt outfit.

Meanwhile, Nayan and Vignesh recently turned producers. Their film Koozhangal was picked for Shanghai International Film Festival 2022, which was directed by PS Vinothraj.

On the work front, once again Nayanthara will be seen working with Megastar Chiranjeevi in an upcoming film Godfather. In the past they have worked together in Sye Raa Narasimha Reddy.