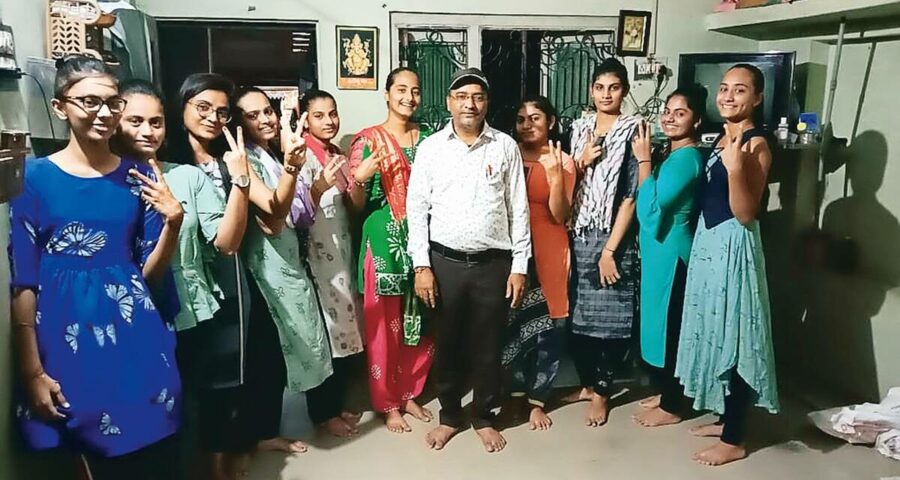 This year, the state government had decided to give mass promotion to regular students in view of the Covid-19 pandemic, while Board exams were conducted for repeaters and external students for classes 10 and 12 between July 15 and July 27. Pravina Ahir, 28, of Varachha had to quit studies in 2006 after completing Class 8 from a government school at her native place in Rajula taluka of Amreli district as her family was struggling to meet both ends meet. Pravina started working with her mother Vimlaben by stitching lace borders on sarees. Her family –comprising her parents and a younger sister — migrated to Surat where father, Shyamjibhai, started working as a diamond polisher.

Fifteen years later, Pravina is one of the 32 persons, who had dropped out, passed the Class 12 Board exams held this year.

Behind their victory is Naresh Mehta, principal of a Surat Mun-icipal Corporation-run Suman school in Katargam, who provided free coaching to these students.

This year, the state government had decided to give mass promotion to regular students in view of the Covid-19 pandemic, while Board exams were conducted for repeaters and external students for classes 10 and 12 between July 15 and July 27.

Pravina, who cleared the Class 12 Board exams in Arts stream with 70 per cent marks hopes to become a teacher.

Speaking to the Indian Express, Pravina said, “Our initial days in Surat city were tough. Me and my mother were stitching lace borders on sarees throughout the day. We get Rs 4 for the saree work and we used to finish 200 sarees in a day. My father earned around 7,000 per month during the initial days and we have to pay the house rent and take care of other expenses. Through hard-earned money, we paid our bills, and even got my younger sister Shilpa to study further. Now she has completed her B. Com.”

She added, “Two years ago, Naresh sir came to our residential society and inquired about the girls who had dropped out of school and explained to us the importance of education. I also attended the interactive meeting with other girls of our area in a house and finally, I decided to study further as I was tired of doing stitching work.”

The 32 students had cleared the board exams as external and repeater students in Gujarati medium, and they were taught by Mehta at their homes.

A total of 24 dropout girl students had filled forms for Class 12 Board exams in Arts stream, as external students, out of which 19 passed the exam.

Similarly in Class 10, among 21 students, 10 passed as external students, while three out of seven repeater students also cleared the boards. All of them had quit studies to help their families by doing odd jobs.

Mehta told The Indian Express, “In my teaching profession, I have come across many girl students who left studies after class 8 and helped their parents financially. Six years ago, I found a girl student who had topped in the municipal school, had left studies after class 8, due to financial problems. I talked to her parents and convinced them to let her study further, as an external student, and also gave her free coaching and books, and at present, she is working as Talati in the government.”

“Generally, there is still a tendency that parents to not let their daughters study more and give more importance to sons when it comes to education. I took up this challenge and started an initiative to identify the girl students and get them educated as external students,” he added.

Devika Paradva, 26, also cleared this year’s Class 10 Board exams with 82 per cent mark as an external student.

She had quit studies in 2010 to help her parents by doing embellishment work on sarees after her father left diamond cutting work due to his poor eyesight. A resident of Punagam area in Surat, Paradva said, “Mehta Sir explained to me about the benefits of education. Now I will also give Class 12 Board exams and do my graduation as well. My dream is to get a government job.”