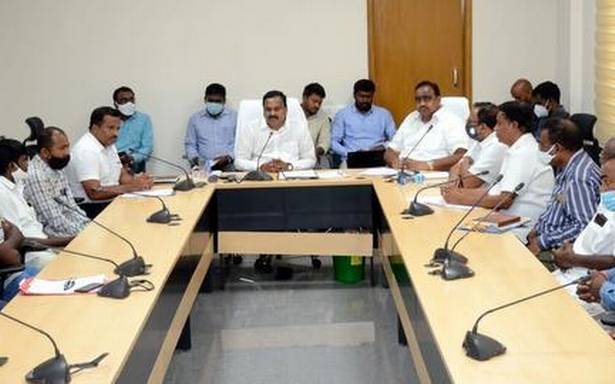 Farmers of Gudatipally in Akkannapet mandal of Husnabad revenue division were not ready to part with their land for Gouravelli reservoir if they do not get a proper compensation. They made this clear in a meeting held by Collector P. Venkatarami Reddy and attended by MLA V. Sathish Kumar. “Pay us the right compensation and only then acquire land from us,” was what the farmers told the officials in the three-hour long meeting held at Siddipet Collectorate on Friday evening.

The government has taken up redesigning of irrigation projects in the State in 2015 after the formation of Telangana State. As part of that, the capacity of 1.41 tmc ft project was redesigned and enhanced to 8.23 tmc ft. The government has acquired 2,200 acres in 2009 followed by 1967.18 acres in second phase and another 272 acres in the present phase.

The oustees have been demanding that they should be paid a compensation of ₹15 lakh per acre and for structures and trees to be removed. They recalled how the oustees of Vemulaghat under Mallannasagar were compensated to the tune of ₹11 lakh in December 2018 and now, “after three years the amount should considerably be increased”.

“The Collector and MLA told us that they can only offer ₹11.5 lakh per acre. They also made it clear that paying beyond the promised amount was not in their hands and they are helpless. Stating that their offer is not acceptable to us, we have walked out of the meeting,” said Baddam Raji Reddy and B. Yella Reddy, farmers of Gudatipally.

Over 140 youth of the village, who attended the meeting, said that they were offered ₹2 lakh as compensation along with the youth of Mid Manair and Yellampally in 2015 but the amount was not paid so far. Hence, they should be paid compensation on the lines of what was extended to the youth ousted due to the Mallannasagar project. For this also, the Collector reportedly expressed his inability and the meeting ended inconclusively.