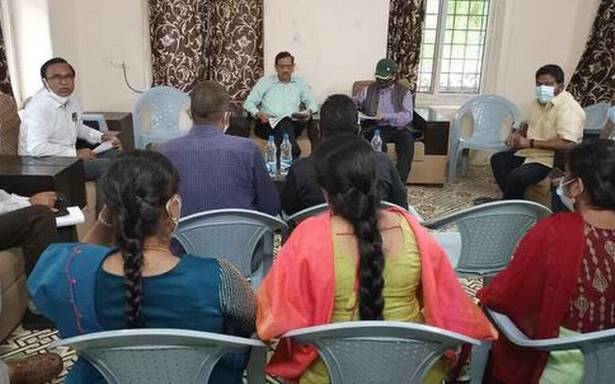 Part of process of taking over of the projects

A team of the Godavari River Management Board (GRMB) led by its Chairman J. Chandrashekhar Iyer visited Sriramsagar Project and Chowtpally Hanumantha Reddy lift irrigation scheme on Monday as part of implementing the purview of the board by taking over the management of the projects in the basin in the two Telugu States, although the stalemate over handing over the projects continues.

The team comprised board member P.S. Kutiyal, Executive Engineer C. Padmini and a few other deputy and assistant executive engineers of the board. According to information reaching here, the GRMB team visit the projects, enquired about the inflows and outflows this water year, about operation of the crest gates, about the hydel unit there, the canal systems based on the project, ayacut and utilisation of water.

The visit has been undertaken as part of the exercise for operationalisation of the board’s purview, which has come into effect from October 14, although the two member States are yet to handover projects for their management by the river board. The States have expressed their unwillingness to handover the projects stating that there were not in dispute over water sharing and the utilisation of water was well within the allocation made by the tribunal.