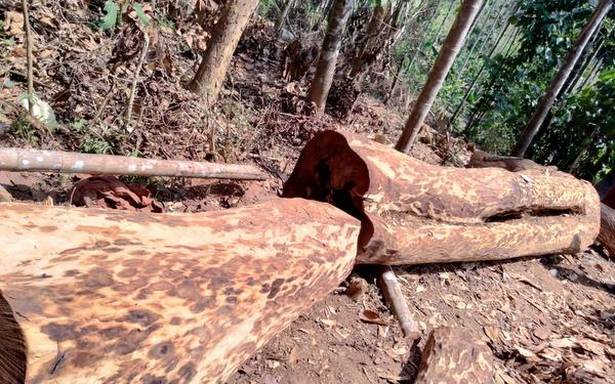 200 trees illegally axed in private plantations in Wayanad, they allege

Environmental organisations in the district have sought government intervention to foil attempts by a saw mill lobby to fell centuries-old Indian rosewood, ‘Veeti’ or ‘Eeti’ in local parlance, by flouting all norms from private plantations in Muttil South village in Wayanad district.

In a letter addressed to the Chief Minister, Forest Minister, Chief secretary, and the Wayanad District Collector, N. Badusha, president, Wayanad Prakriti Samrakshana Samiti, said the lobby had axed more than 200 huge rosewood trees with 25 land owners, including small-scale and tribal farmers at Vazhavatta, Avalattukunnu, and Karimkannikunnu within the Muttil South village office limits at a low price.

Though the Meppadi forest range office had denied issuing of pass to transport the wood, the lobby had been continued to fell the huge trees for the past two weeks with the support of Revenue officials, Mr. Badusha added.

However, the district administration, which is the custodian of reserved trees like rosewood, teak, and Sandalwood, is yet to take any action against the illegal mass felling of trees, he alleged.

Revenue officials are supporting the lobby by misinterpreting an order issued by the department on October 20, 2020. According to it, farmers having title deeds can cut all categories of trees, except sandalwood, grown on the plot. But it does not allow them to cut royal trees such as rosewood and teak which had existed on the land before they got the title deeds, Mr. Badusha said.

The issue came to light when farmers in the area had submitted separate requests to the Meppadi forest range officer to issue passes to transport rosewood on their plantations after cutting it.

They also produced NOC and location sketch from the village office as well as the xerox copy of their land deeds, apart from a report of the section forest officer for the purpose. However, the forest range officer refused to issue permission after he found that the trees belonged to the reserved category. Later, he brought the issue to the attention of the Vythiri tahsildar, but the later was yet to take any action on the issue, Mr. Badusha said.

According to a study by the Kerala Forest Research Institute (KFRI), Peechi, the high demand for valuable timber and the irrational felling and extraction from the natural area has turned the tree into a most threatened species. The IUCN (International Union for Conservation of Nature) List of Threatened Species or Red List, or Red Data List, declared this species as vulnerable in 1998.

However, Wayanad District Collector Adeela Abdulla told The Hindu that the Additional District Magistrate had visited the site on her direction on Friday and booked a case against defaulters under various sections of the Kerala Land Conservation Act.