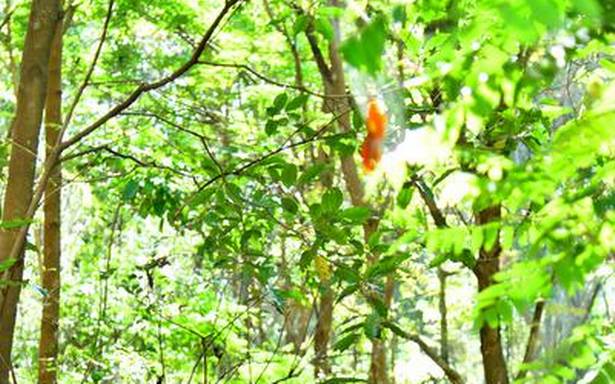 Alappuzha school teacher on a mission to increase tree cover

At the Vignjana Vilasini Higher Secondary School (VVHSS), Thamarakulam, there are two intrinsically green gardens teeming with life. A herbal park spread over 25 cents is home to more than 150 medicinal plants and the second garden, which uses the Miyawaki method, houses 460 trees of 115 species in five cents.

While the abundant tree cover on the campus is the fruit of relentless planting and nurturing by students and staff, one man who deserves accolades is Raphi Ramanath, biology teacher at the school.

For Mr. Ramanath, 41, the two gardens are small endeavours given a long list of initiatives undertaken by him to increase tree cover since 2009.

The teacher has so far planted or helped plant more than one lakh saplings in Alappuzha and other parts of the State. Mr. Ramanath, who won the best conservationist award of the Kerala State Biodiversity Board in 2015, recently bagged the Vanamitra award of the Kerala Forest and Wildlife Department for his efforts to conserve the environment.

He says his vision is to increase green cover and inculcate environmental values in young minds. “I was not part of any conservation initiatives until I became coordinator of the school nature club in 2009. As a beginning, we planted saplings of 50 medicinal plants with the help of the Forest department. After finding success at the school, I embarked on a tree planting drive in Alappuzha and outside. I have found students an able partner in my initiatives in increasing green cover,” says Mr. Ramanath, hailing from Thekkekara in Mavelikara.

His initiatives got a boost when he was elected State coordinator of an environmental NGO in 2013. He helped create herbal/fruit gardens, butterfly gardens and nakshatra vanam (planting trees named after stars in the Malayalam calendar) in a number of schools, government offices, places of worship and so on over the years.

Although, no longer associated with the NGO, he continues to plant saplings and distribute saplings free of cost to those who are ready to plant them.

He had organised protests against the practice of nailing signboards on trees. As part of creating awareness on the importance of trees and biodiversity conservation, Mr. Ramanath had produced a couple of documentaries.