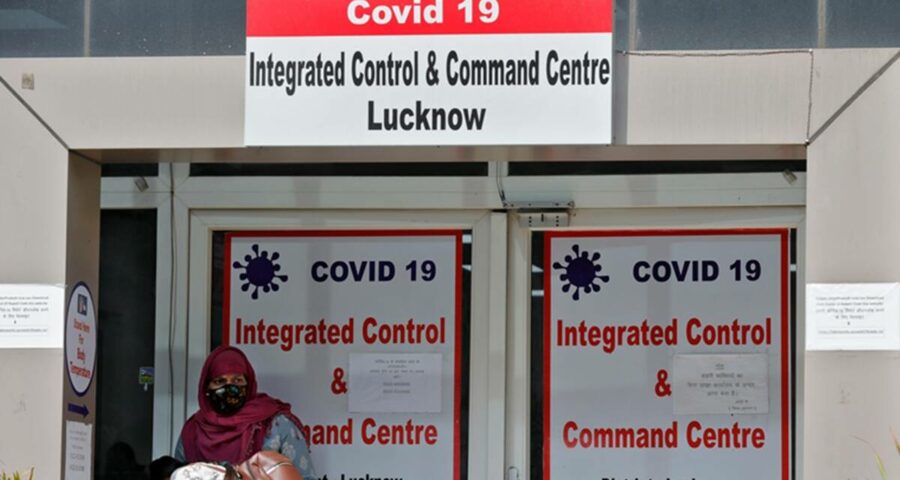 Chief Minister Yogi Adityanath announced that from now oxygen cylinders would be given to people only if they have doctors’ prescriptions and Aadhar cards. 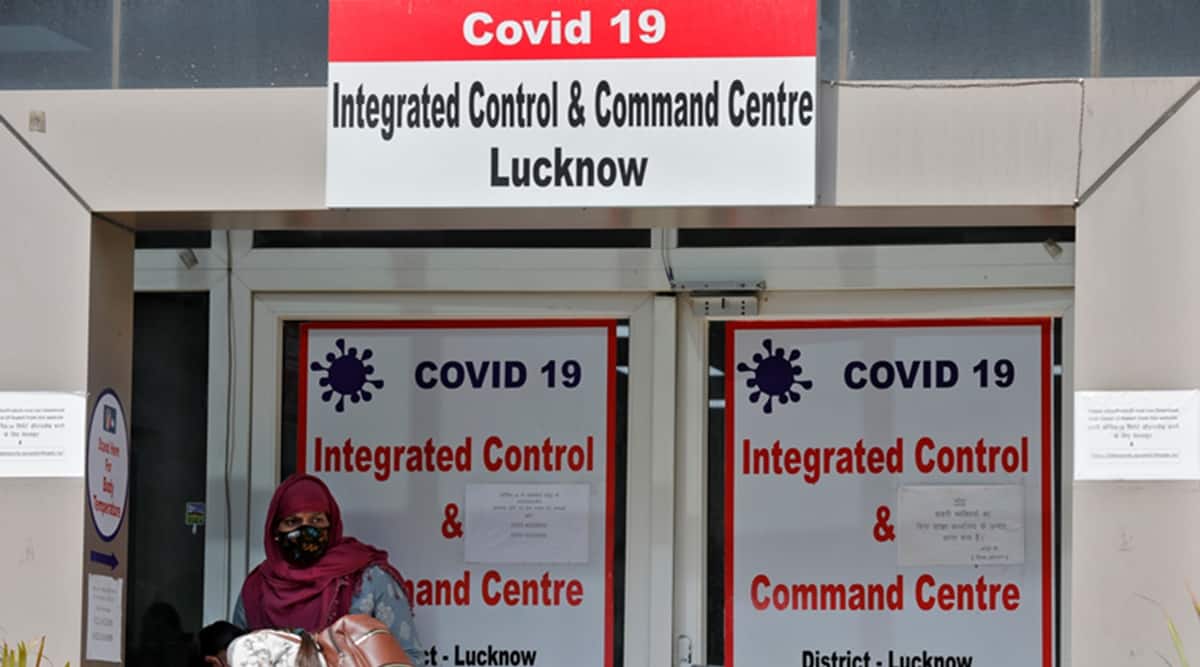 Hospitals in Lucknow continued to grapple with a major oxygen shortage on Wednesday as two private medical facilities told the families of Covid-19 patients to shift them elsewhere because of the crisis. Both the hospitals said their vehicles were parked outside oxygen plants and supply agencies but added that their current stocks would run out in a few hours despite one of them receiving 40 cylinders in the evening.

A majority of the 160 Covid-19 patients in Mayo Medical Centre, and Makewell Hospital and Trauma Centre are on oxygen support. But due to the lack of oxygen supplies, the facilities put up notices asking patients’ relatives to take them to other hospitals. This caused chaos, with families confronting the hospital administration.

The notice put up outside Mayo read, “After repeated request to UP CM/Central government we are not able to get enough oxygen supply. Hence we are requesting family members of those patients who are on oxygen support please take their patients to a higher centre for further management. We are extremely sorry for inconvenience.” 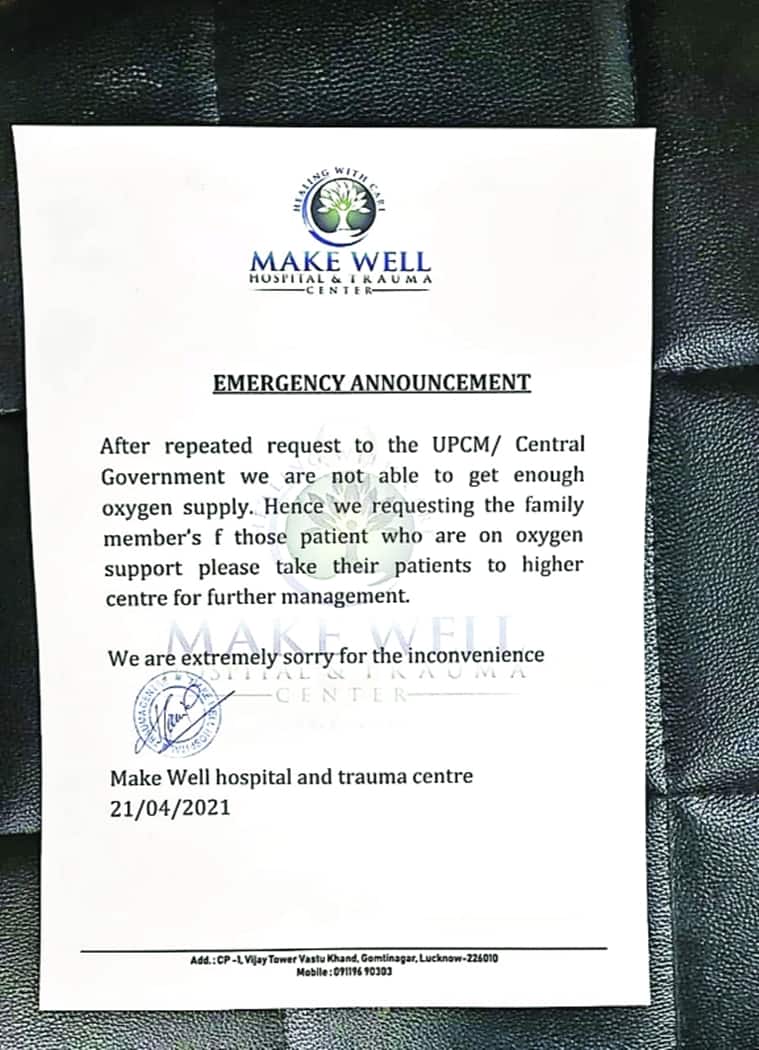 A hospital official said there were 117 Covid patients in the facility, 90 of whom were on oxygen support. “There are 15 of them in the ICU,” the official added.

In a letter to the Lucknow Chief Medical Officer (CMO), Mayo said, “This is to bring to your notice that Mayo Center, Gomti Nagar, Lucknow is facing acute shortage of oxygen supply which is severely hampering the treatment of critical COVID patient…Despite our best efforts, we are able to maintain a backup of 15 minutes only as oxygen is not available anywhere in Lucknow…” The health centre requested the CMO to arrange for “urgent shifting/transfer the patients admitted in our hospital”.

The owner of Makewell Hospital in Gomti Nagar, Vinay Pratap Singh, told The Indian Express that the medical facility put up the notice “as a last resort”.

“We did not have to discharge patients, but to be on the safe side, we had to paste notice so they know about the shortage… We have been facing issues with liquid oxygen supply for the last one week or so. Today, we were facing a major shortage of oxygen as our vehicles were standing at the suppliers for seven hours. As a last resort, we had to paste this notice. Our oxygen suppliers like Murari Gas, Oudh Gas were out of oxygen,” Singh said, adding that there were 43 Covid patients in the hospital.

Singh said, “For now, we have oxygen for the next four hours. Our vehicles are standing at three plants. We hope we get the oxygen from there.”

“It was with the help of Deputy CM Dinesh Sharma that I got 40 cylinders after the notice was pasted. The condition was terrible, and it could have led to a huge tragedy. I have faith in government, but there are some officers who I had been asking since last night, and when nothing worked out, I had to paste the notice outside the hospital. I had to take the step to save lives,” Dr Singh added.

She said her hospital’s vehicles were parked at the offices of various oxygen suppliers and agencies. “Our vehicles have been waiting for hours at different agencies,” Dr Singh said, adding that as of Wednesday evening the hospital had supplies for five hours.

Meanwhile, the family members of a 50-year-old woman admitted to Almighty Hospital in Wazirganj alleged that she died on Wednesday due to lack of medical oxygen. The hospital, however, denied the allegation.

Patient Pushpa Mishra’s nephew Dr Mayank Dixit told The Indian Express that his aunt succumbed to Covid-19 after the hospital ran out of oxygen. “At least 10-15 people have died at the hospital in the last few days due to shortage of oxygen. For the last 10 days, my aunt was in ventilator support. I had been arranging oxygen on my own as I am also a doctor. But today, I could not do anything, and my aunt succumbed. We were told last night to shift my aunt to another hospital,” Dixit added.

Responding to the crisis, the UP government said instructions had been given to officials “to assure the availability of oxygen for the next 36 hours in all hospitals of the state”.

Chief Minister Yogi Adityanath announced that from now oxygen cylinders would be given to people only if they have doctors’ prescriptions and Aadhar cards. “Strict action will be taken against those who indulge in black marketing,” the chief minister’s office tweeted.

Earlier, a government spokesperson told the media, “All medical colleges, universities, and institutes in the state will be closely watched. For this, a 24-hour state-level control room is being set up in the office of the Director-General, Medical Education and Training, where the officials will keep an eye over the oxygen supply and will review the availability of the stock on a daily basis.”