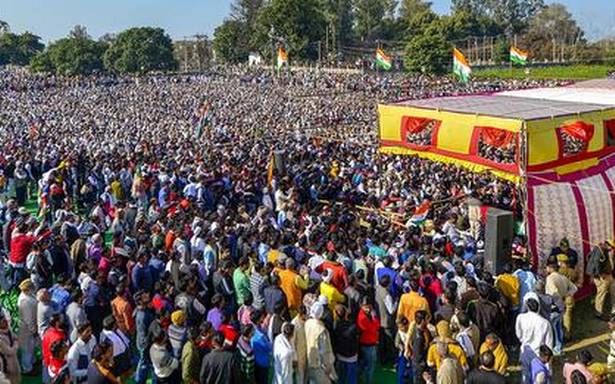 They term statements of Modi as ‘anti-farmer’.

Farmer unions on Thursday termed the statements of Prime Minister Narendra Modi “anti-farmer” and alleged that the government was not serious on their demand for full price for their produce. They also unveiled a plan to hold more “Kisan Mahapanchayats” in the days to come.

The Samyukt Kisan Morcha (SKM), a joint front of the unions, said Mr. Modi’s statement that many laws were made without demanded by people proved that the farm laws were not demanded by the farmers. Opposite to it, the government was not serious on their fair and genuine demand of “Karja Mukti; Pura Daam” (freedom from debt and full price).

Earlier, a rally was organised at Jagraon in Punjab. Farmers also held a “panchayat” on the Shambhu border.

Addressing the participants, the farmers’ leaders spoke about the upcoming programmes of the SKM. The farmers opposed the proposal of the Haryana government to install closed-circuit television cameras at the Tikri sit-in site.

The SKM announced that “Kisan Mahapanchayats” would be organised all over the country. The SKM would not take back the protest until the repeal of three farm laws and legal recognition to MSP, said a statement.

Besides “mahapanchayats” in Moradabad and Bahadurgarh on Friday, similar gatherings will be held in Rajasthan’s Sri Ganganagar, Hanumangarh and Sikar next week.