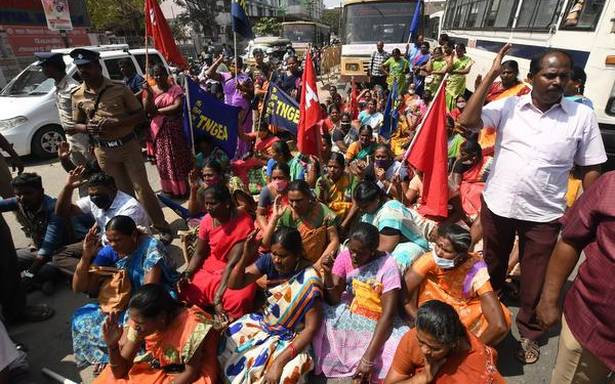 Members of Tamil Nadu Government Employees’ Association (TNGEA) staged a demonstration near Government Rajaji Hospital in Madurai on Tuesday demanding to scrap the New Pension Scheme and pressing for a charter of other demands.

Headed by district president J. Moorthi, the protesters urged to bring back the old pension scheme.

They demanded to scrap the Contributory Pension scheme (CPS) as there was a lack of clarity on the implementation of the scheme. "The State government has still not got the approval of Pension Fund Regulatory and Development Authority regarding the CPS. So, they must repeal the scheme," said K. Neethiraja, district secretary of the association.

All anganwadi workers, nurses appointed through Medical Services Board and nutritious meal workers who are currently under contract or consolidated pay basis, must be bought under time scale pay, they demanded.

The government must immediately pay arrears for the delay of 21 months in implementing the Seventh Pay Commission recommendations.

The Government Order of freezing Dearness Allowance in the view of the COVID-19 pandemic, must be scrapped, demanded the protesters.

Around 250 members participated in the protest and nearly 170 of them were arrested.