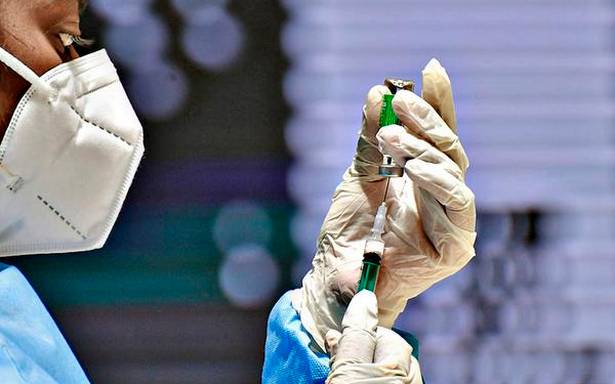 ﻿The Union Health Ministry on Thursday said it was “closely following the developments in the United States”, which has given the green signal for booster dose of COVID-19 vaccine that is to start rolling out soon.

Doctors in India are also advocating booster dose. They stated that giving a third dose after a space of six-eight months had been shown to increase immune response markedly as per some research papers.

Dr. Sandeep Kharb, senior consultant, Endocrinology, QRG Health City, Faridabad, said, “So in view of the new emerging variants, booster doses of COVID-19 vaccines should be used in high-risk groups. It will add to herd immunity too’’.

Dr. Akshay Budhraja, senior consultant, Pulmonology, Aakash Healthcare, observed that booster dose would definitely be a requirement in future. But there was a big vaccine gap between low-income and high-income countries, which was why the World Health Organisation (WHO) had recommended a stop to it for now.

“The scenario in the U.S. is different, as most of the population has been fully vaccinated, so there is no harm in giving booster doses, although we will only be able to understand its benefits after studies are conducted on it. It is certainly going to be a trend in future to get a booster dose every year, just like the flu vaccine. As the virus keeps on mutating, even vaccines need to be updated with the latest strain annually. It has to be decided whether it would be administered on a yearly basis or not or whether every person would require it,’’ he said.

All India Institute of Medical Sciences (AIIMS) Director Randeep Guleria had explained that India will have to take a serious look at bringing in booster doses to ensure that the population here is able to keep up the antibody levels in the body which will offer better protection to the emerging variants.

This is when the WHO has raised alarm at the vast vaccine gap between high-income and low-income countries.

Dr. Viswesvaran Balasubramanian, interventional pulmonologist at Yashoda Hospitals, Hyderabad, said that currently the U.S. FDA had agreed to the booster doses for mRNA vaccines like Pfizer-BioNTech and Moderna.

“However, with respect to J&J vaccines, there are no clear-cut guidelines regarding the booster dose yet. There are still considerations for mix-matching of vaccines as a booster dose, which is still a matter that needs further studies and research data. Currently in India, we still do not have guideline recommendations for booster doses of vaccine. However, with the upcoming scientific evidence, we may see a role for such booster doses in the near future,” he stated.

Dr. Arunesh Kumar, senior consultant, Pulmonology, Paras Hospital explained that with two variants of the virus coming in, it had become more important that people have neutralising antibodies at a higher level to prevent breakthrough infection. Studies were on on booster dose and it may soon be established that like any other viral infection, e.g., H1N1 virus, booster dose would be required, he noted.

“There are two papers which say that if the vaccine that houses the other variety enhances the antibody production. That tells us that a booster is likely to become a requirement in the coming days, but we need more data on this. It may be planned in a phased manner, everyone who is a vaccine candidate may need a booster and perhaps administered first to people who are more exposed to the virus — healthcare and frontline workers — and then can be rolled out for all age groups,’’ he pointed out.

The Indian Council of Medical Research (ICMR) on Thursday said the country had achieved a milestone of conducting 50 crore COVID-19 tests on August 18.