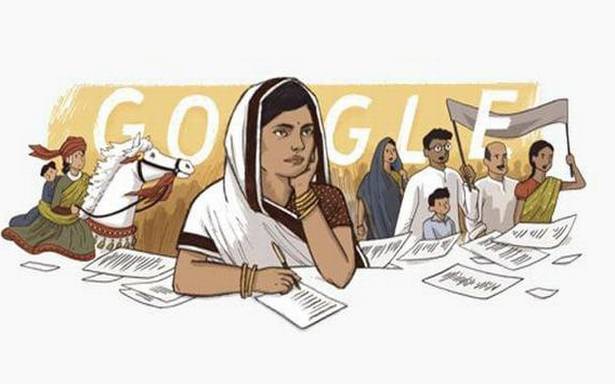 In a statement, Google described Ms. Chauhan as a “trailblazing writer and freedom fighter” who “rose to national prominence during a male-dominated era of literature”.

Google on Monday commemorated the 117th birth anniversary of freedom fighter and poet Subhadra Kumari Chauhan with a striking doodle on its homepage.

Illustrated by New Zealand-based artist Prabha Mallya, the doodle shows Ms. Chauhan dressed in a saree and sitting with a pen and paper. The background depicts a scene from her poem ‘Jhansi ki Rani’, one of the most iconic poems in Hindi literature, on one side and freedom fighters on the other.

In a statement, Google described Ms. Chauhan as a “trailblazing writer and freedom fighter” who “rose to national prominence during a male-dominated era of literature”.

Ms. Chauhan was born on this day in 1904 in Nihalpur village in Uttar Pradesh’s Allahabad, now Prayagraj.

“She was known to write constantly, even in the horse cart on the way to school, and her first poem was published at just nine years old. The call for Indian independence reached its height during her early adulthood. As a participant in the Indian Nationalist Movement, she used her poetry to call others to fight for their nation’s sovereignty,” Google said.

Her poetry and prose primarily focused on hardships that the Indian women overcame “such as gender and caste discrimination”.

“In 1923, Ms. Chauhan’s unyielding activism led her to become the first woman satyagrahi, a member of the Indian collective of nonviolent anti-colonialists, to be arrested in the struggle for national liberation,” the internet search giant said.

As part of her contribution to the freedom struggle, Ms. Chauhan continued to make revolutionary statements on and off the page and she published a total of 88 poems and 46 short stories.