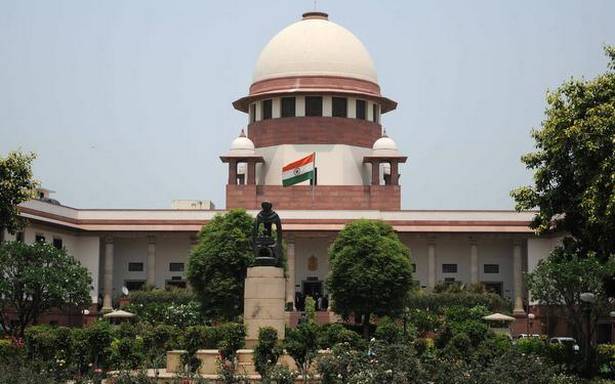 Adjourning case on the understanding that the pleas would be ‘peremptorily’ disposed of, CJI says.

Solicitor General Tushar Mehta on Wednesday informed the Supreme Court that the Goa Assembly Speaker is ‘hearing’ disqualification petitions against 10 former Congress MLAs who ‘merged’ with the BJP in 2019 on February 27.

“The Speaker has fixed the hearing on February 27. The merger is also pending before the Speaker,” Mr. Mehta submitted.

A Bench led by Chief Justice Sharad A. Bobde mentioned in its order that the Speaker has listed the disqualification petitions for ‘disposal’ on that date.

However, when Mr. Mehta sought to clarify that the petitions were kept for ‘hearing’ and not ‘disposal’, the CJI orally observed that the court was adjourning the case for March on the understanding that the Speaker would ‘peremptorily’ dispose of the petitions.

“We need not hold our hands because they [disqualification petitions] have been kept for hearing. We are saying ‘disposal’ [in the order],” Chief Justice Bobde said.

On January 4, the CJI had orally observed that “nobody can have a vested right to delay” in a plea filed by Goa Congress leader Girish Chodankar about the delay of over a year and half by the Speaker to decide the disqualification petitions.

Senior advocate Vivek Tankha, for Mr. Chodankar, voiced an apprehension that “after a lot of pushing they have done it… They [legislators] have filed a reply in the Supreme Court but not before the Speaker… On the 27th they will ask for a date”. The Speaker has to act as a Tribunal while deciding the disqualification petitions, Mr. Tankha submitted.

In an earlier hearing, senior advocate Kapil Sibal, for the Congress party and Mr. Chodankar, said a year and a half had passed without the Speaker taking a call.

The lawyers for the legislators and Mr. Mehta submitted that the Speaker should be left to exercise his discretion and the court should not interfere at this stage.

Mr. Chodankar had alleged that the 10 MLAs, purportedly claiming to form two-thirds of the Indian National Congress (INC), “decided to merge the said legislature party with the BJP” and addressed a communication to that effect to the Speaker.

The plea said based on the communication, the Speaker was pleased to take note of the “alleged merger of INC’s legislative party in the Goa Legislative Assembly, and allotted the 10 MLAs seats in the Assembly along with the members of the BJP”.

Mr. Chodankar has contended that the legislators “ex facie incurred disqualification under Article 191(2), read with Para 2 of the Tenth Schedule (defection), and are liable to be disqualified as member of the Legislative Assembly”.

The petition has referred to a recent judgment of the Supreme Court which urges Speakers to decide disqualification proceedings within a reasonable time, ideally within three months.