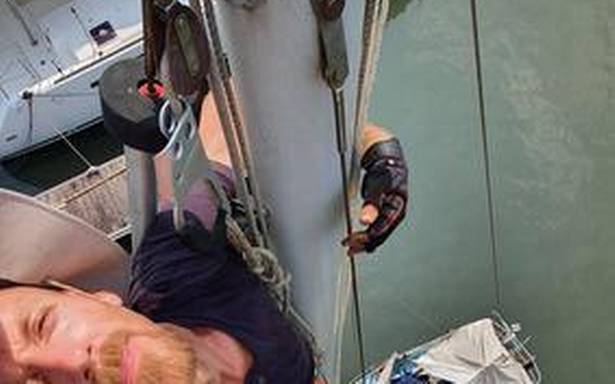 The Young Canadian, Markus Pukonen, will be remembered as one among the iconic seafarers who called at Kochi International Marina that abuts Bolghatty Palace. He is also a bicycle and nature enthusiast.

Founder of Routes of Change, a non-profit organisation, he has been using just his muscles and some wind to journey over 40,000 km around the planet, during the past five-and-a-half years.

“No trains. No automobiles. Not even an elevator. I’m not anti-motor, nor do I think I am saving the planet. What I am doing is inspiring the public and students at presentations and connecting with local non-profit organisations to share their stories and raise support for them. I don’t pretend to be a hero or have all the answers to our problems but I do think I am part of the solution, and more importantly, I think we are all part of the solution. It is time we acknowledged our immense power to influence and change the world around us. It is fun and exciting to take control of that power. Join the Routes of Change community and let us make epic things happen,” says 38-year-old Mr. Pukonen in his website.

His conversation with The Hindu, days before he sailed out of Kochi in early April, began with the adventurist saying how four persons of Indian origin were Cabinet Ministers in Canada, including that country’s Defence Minister.

Having begun his journey from Toronto in 2015, he relied on a host of non-motorised commuting options, from canoes and kayaks to bicycles.

He bicycled to Kochi in December 2020 from Nepal. Before that, he sailed across the Pacific Ocean, from San Francisco to Hong Kong. “Being a filmmaker, I also write about and document my journeys.”

While in Kochi, he took care of Sundowner — a yacht that was berthed at the marina. Its owner was stuck in Australia during the pandemic. Mr. Pukonen spent considerable time every day, tending to the yacht which was in pretty rough shape. A local mechanic sometimes pitched in with help.

The skyrocketing humidity levels never deterred the ever-cheerful Mr. Pukonen from pedalling to mainland Kochi in his foldable bicycle to procure groceries. “I always prefer cycling to ‘tuk-tuks’ (as autorickshaws are known among foreigners) and other commuting modes,” he said.

“I preferred Bolghatty Island to the noise and chaos in the city. It is ironic that the otherwise patient Indian turns impatient and aggressive when they drive vehicles. Roads in the country are polluted and dangerous, while incessant and unnecessary honking, including by government vehicles, exceeds all limits. Bicyclists must be respected even if there are no dedicated lanes for them.”

The consummate adventurist signed off with this message: “There is no substitute for a simple, frugal life, which leaves minimal carbon footprint. The biggest single thing must be to grow one’s own food.”