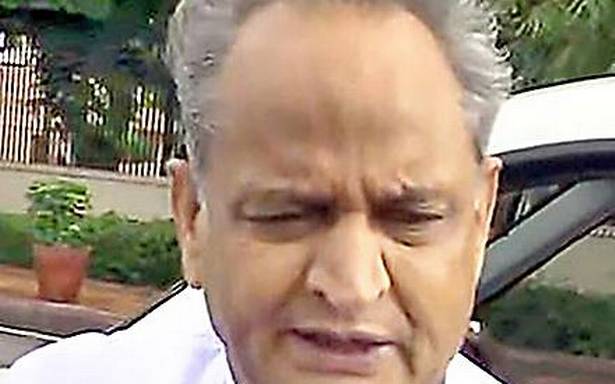 Rajasthan Chief Minister Ashok Gehlot on Saturday demanded an immediate withdrawal of electoral bonds which he said were promoting black money and were brought in by the Narendra Modi government despite objections by the Election Commission, Reserve Bank of India and the Opposition parties.

Mr. Gehlot said the Bharatiya Janata Party had got 95% share of the electoral bonds in 2017-18 and the RBI Governor had clearly stated that these bonds could lead to money laundering. “The EC filed an affidavit in the Supreme Court in 2019 stating that the electoral bonds would end the transparency of donations received by political parties,” he tweeted.

While stating that the Election Commission had softened its stand now, Mr. Gehlot affirmed that simply withdrawing the electoral bonds would not serve the purpose. He said the Supreme Court should take the petition on electoral bonds to its logical conclusion to ensure transparency in political funding.

“Mr. Modi had promised to put the black money to an end. He could neither bring back the black money from abroad nor the demonetisation could reduce it,” Mr. Gehlot said.

“The Modi government wants to run the country in a fascist manner. Electoral malpractices, horse trading of elected MLAs, and when failing in both, it resorts to passing such a dictatorial Bill on the strength of its majority in the Parliament. This is how the Modi government rules,” Mr. Gehlot said.