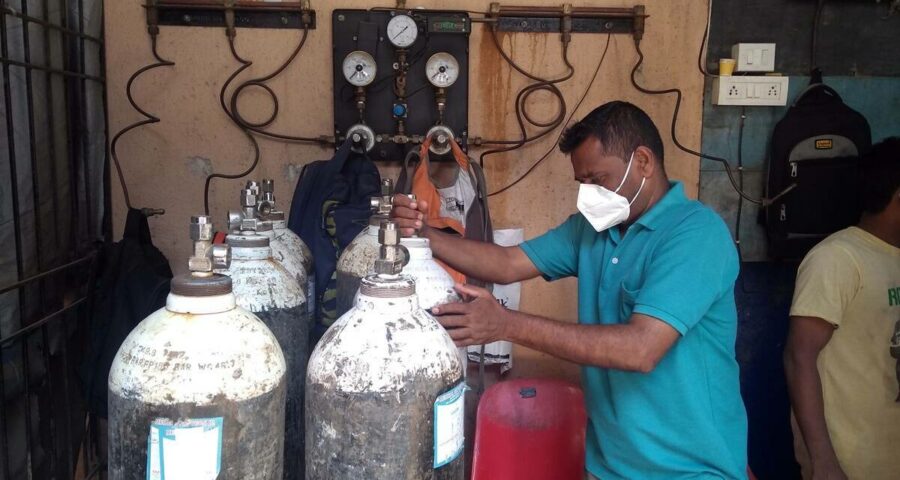 Many feel that learning from Covid in 2020 has prepared the industry to deal with the situation better this time around and the measures that they have adopted this time around is ensuring that the migration crisis seen in 2020 is not repeated. WITH THE country fighting its worst Covid spread to date, alongside inadequacies in healthcare system, India Inc is not only working towards enhancing the treatment infrastructure such as oxygen supply, drug availability and supply of beds, but is also working towards keeping manufacturing establishments running by following guidelines, creating team bubbles, and using technology.

A top official with Confederation of Indian Industries, who is part of the team co-ordinating meetings of the CII members on Covid-related developments, said over the last couple of days, the industry body has identified 100 companies across the country that either manufacture or use oxygen in their plants and have been asked to divert oxygen for the healthcare needs in their states.

“Steel plants need a lot of oxygen for steelmaking and several steel manufacturers have come forward and are now reducing their oxygen requirement and are diverting the same for the healthcare requirements within their state. The oxygen producing companies too are ramping up their production,” a CII official said. Naushad Forbes, co-chairman, Forbes Marshall, said in the discussion with the Maharashtra Chief Minister on Saturday, the industry came forward to help in any way possible. “Steel plants and large petrochemical plants that have large oxygen generating facilities will now provide medical use oxygen. While not all facilities can generate them, the modern ones can do so and they have already started doing that. I think that over the next few days it should be able to cater to the requirement.”

The head of another industry body said that while ramping up of oxygen plant is a very simple process, “clarity is needed on who will buy, what quantity and at what price,” and that will help the cause. “Just like pricing was fixed for Remdesivir, pricing needs to be set for Oxygen cylinders too and that would help in enhancing its production,” he said.

Industry insiders say that manufacturing setups had big learning from last years experience when people lost jobs due to closure of plants or business establishments and migrant workers were forced to hit the road along with their families.

Everything has been less reactive this time, says Forbes, lauding at the governments response of not going for a complete lockdown and allowing manufacturing activity to continue.

Stating that while policy initiatives have been much more reasonable this time and manufacturing has continued with focus on safety, even the industry has reacted in a better way. “They are taking care of their employees unlike last year when they acted differently and went for cost cutting and did not look after their employees and the contracts. The companies are also setting up quarantine centres to take care of their employees and workers and not burdening the hospital infrastructure with that,” said Forbes.

A senior official at CII said that the industry does not want lockdown and want the factories to run as it disrupts livelihood. “The broader sense among manufacturers is that the workers are safer on the shop floor than outside. Company’s want to keep their factories running and are asking office employees or service related staff to work from home,” said a CII official.

Several companies have formed set of teams and have kept them in bubbles so that one team does not come in contact with the other.

“Companies are using artificial intelligence and RFID to keep track of their employees in the plant. They are also taking care of their families and communities and ensuring that the workers are tested every 2-3 days and also encouraging them to get vaccinated if they are in the qualifying age,” said a senior official with an industry association.

Many feel that learning from Covid in 2020 has prepared the industry to deal with the situation better this time around and the measures that they have adopted this time around is ensuring that the migration crisis seen in 2020 is not repeated.

A senior official with Maruti Suzuki said that while there has been some impact on production due to issues of raw material supply, “we have not seen the issue of workers leaving for their home towns as of now as the plant is operational. We do not see a repeat of migration and reverse migration that was seen last year.”

Kuldeep Janghu, president, Maruti Suzuki Kaamgar Union said that the Manesar plant is running smoothly and there are no issues that workers are facing. All areas in the Manesar plant are sanitised, workers are wearing masks and the vaccination of employees above 45 years has been organised in the plant premise only. He further added that almost all plants in the Manesar area are working fine and there is no visible migration issue that we are witnessing this time around.

Even as companies are focussing on safety measures, the industry feels that government should allow vaccination of individuals under 45 years of age as majority of workers in the plants are in the age bracket of 25 to 45.

Besides large companies, even MSME workers are stating put as of now as the plants are operational and there is no threat to livelihood.

“Last year the major migration issue was of construction workers and daily wagers. All those who were employed with large companies or even MSMEs were relatively fine except for those in sectors including restaurants, handicraft or garment industry where the workers are piece-wagers. This time around the situation is far better as there is not full scale lockdown and transport hasn’t stopped. However, the situation is evolving and a 2-week lockdown announcement could create panic among daily wagers,” said Anil Bhardwaj, secretary general, Federation of Indian MSMEs (FISME).