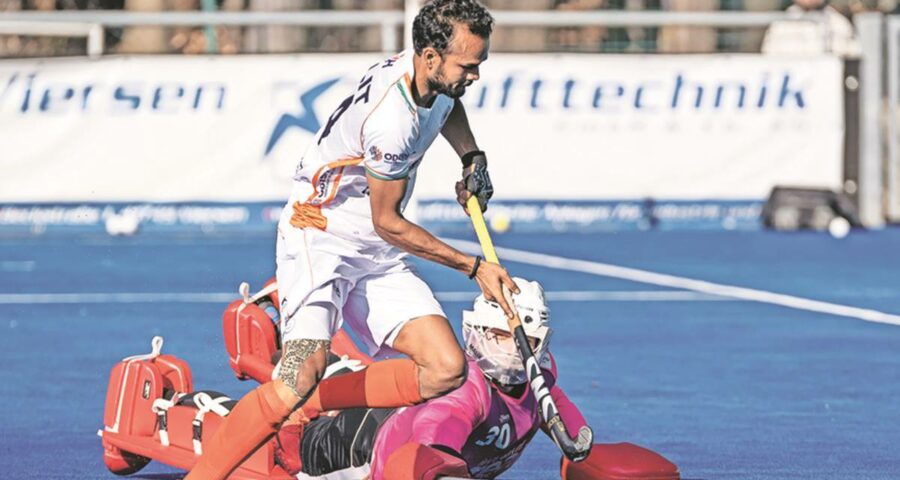 Lalit Upadhyay gets philosophical talking about his journey to the Tokyo Games. It began on the banks of Ganga in Benares, his birthplace. However, it was when he moved to a village roughly 45 km north, quite aptly named in this case, Karampur, that he took a very important turn in his life.

It’s a nondescript village of roughly 3,000 people. The literacy rate is 59.1 percent and only less than half of the population is employed. It’s an area rife with crime and poverty with few prospects for a better life. But in the swathes of barren land, there’s a patch of green – and blue.

“The interest in hockey is 100 percent,” beams Upadhyay. “The entire village, which isn’t too big, plays hockey. It might be at a recreational or semi-professional level, but every household has a player. And the credit for that goes to just one person.” That one person is Tej Bahadur Singh or, as he was known around these parts, Teju bhaiya.

Singh died because of Covid-19 related complications in April, aged 68. More than half of those years were dedicated to instilling a sense of purpose in the lives of those living in and around Karampur. And hockey was a key catalyst. “People who came from very, very poor backgrounds, who did not know where their next meal would come from, who had absolutely nothing in life… he gave them a hockey stick, a pair of shoes, milk, eggs and bread. The only thing he wanted in return was dedication,” Upadhyay says.

Karampur might not even be a speck on Indian hockey’s vast map. It isn’t part of the country’s hockey hotbeds like Punjab, Karnataka, or Mumbai. Had it not been for Teju bhaiya, this village with hockey dreams might never have stepped out of the Mohammad Shahid-sized shadow of Benares. But Karampur has managed to weave a remarkable little story of hope.

For hundreds of dreamers from the Azamgarh-Tarwa-Karampur triangle, ‘Teju bhaiya’s home became a haven. Even today, close to 150 players learn to play on the three hockey fields Singh set up. One of them, Ajit Pandey, is a junior world champion. Another player, Raj Kumar Pal, is in the senior national team core group. But the most famous face of Teju bhaiya’s wards is Upadhyay, who will lead India’s forward line in Tokyo, which will be his second Olympics.

Not bad for someone who started this project just to bring his blood sugar level under control.

Singh is one of the many who have anonymously left their footprint on Indian hockey. He got seduced by the wizardry displayed by the great Indian teams of the 1960s, when he was still in his teens. Kushti was his other big love – there’s a mud pit right behind a goalpost, under a giant tree even today. But after he was detected with high blood sugar levels, at the age of 24, Singh took up hockey.

“There was a very big hockey culture in Uttar Pradesh back then. We had some very good players in Tarwa village, from Benares… and the sport got even more popular when Shahid bhai became a star,” says Radhe Mohan, Singh’s younger brother and a former Samajwadi Party Member of Parliament. “Teju bhaiya never took part in dangals. However, he travelled to so many villages for matches.”

It was largely recreational, Radhe Mohan adds – since the family did not have any financial issues, he used the money to fulfill his hobby. “He thought it was the best way to stay healthy.”

Singh erected a fence surrounding a piece of land just outside his house and converted it into a hockey field. But it was a barren ground, which saw more players getting injured than goals being scored. They used different types of soil to grow grass. When nothing worked. Singh, Radhe Mohan and a few others hopped on their trucks and travelled to Sarnath, the famous pilgrimage site that’s also known for its lush green lawns. From there, they brought truckloads of grass back home. “Today, it’s one of the best grass surfaces in the country, in my opinion,” Upadhyay says. Upadhyay would know. As a player with a style that is a throwback to the old era of Indian hockey, Upadhyay has developed most of his skills playing on the carpet-like surfaces of Karampur, where he moved a little more than a decade ago, having started playing under the SAI-run UP College academy coach Parmanand Mishra.

Singh — smitten by Upadhyay’s delicate touch, rubber-like wrists and silky-smooth skills – offered the young player a place to stay at his home, free education at one of his institutions and complete support. “It’s always very difficult to maintain the balance between studies and sports, especially if you are coming from a remote area like me,” Upadhyay says. “He took care of my fees, ensured I completed my studies and helped me focus on my hockey career.”

Upadhyay isn’t the only one the family supported, Radhe Mohan adds. “Raj Kumar Pal is our driver’s son, he stays at our home even now. Ajit Pandey, too, is the son of one of our drivers. There are many others like them. Teju bhaiya used to play with them, eat with them… he was their coach-cum-guardian.”

Living in Karampur also opened Upadhyay’s eyes to the rustic charms of rural sport. “If you ever travelled on a bus to Ghazipur, you simply had to say baade par jaana hai (I have to go to the barn). It meant you are going to Teju bhaiya’s home and they wouldn’t charge you,” the 27-year-old laughs. 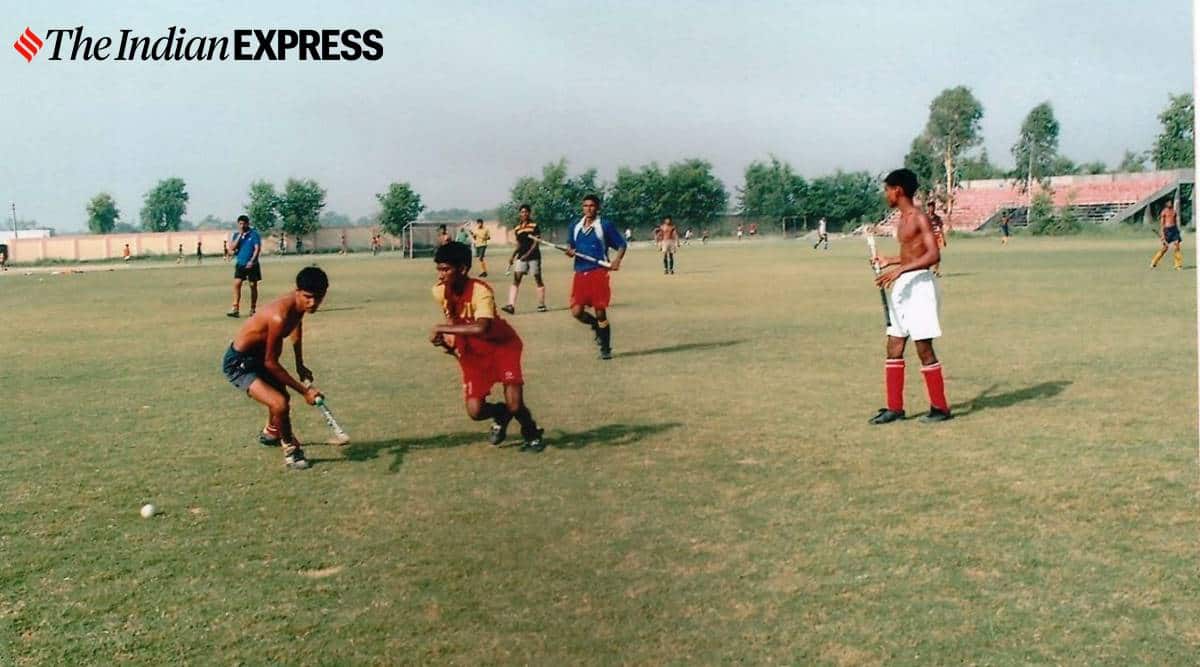 Then, there were the inter-village matches. Hundreds of people would travel to the ground on their cycles and sit around the turf with their legs folded. Singh, too, sat on the ground – but on a carpet that kissed the turf, so he could get as close to the action as possible.

“The atmosphere during the matches in the village was magical. Log satt satt k baithe hue hai. Itni bheed, itni bheed… it resembled a dangal,” Upadhyay says. “If someone played well, they’d be given token rewards of 50 or 100 rupees. It might not sound like a huge amount but to us, it felt like we were millionaires for that one day.”

Dozens of players across the Services and Railways hockey teams began their careers at the baada in Karampur. In December 2013, the sports ministry sanctioned an artificial turf and the upgrade in facility led to instant success, with players from there now being junior and senior national team regulars.

“Teju bhaiya did not realise the kind of work he did. He wanted to remain anonymous. The man stepped out of Karampur only twice in his entire life – once to Benares and the other time to Delhi for heart surgery,” Radhe Mohan says.

Earlier this year, he was scheduled to make his third trip outside his village – to Hyderabad for his Covid-19 treatment. An air ambulance was arranged but Radhe Mohan says Singh succumbed to the complications while on the way to the airport from the Benares Hindu University hospital.

“Till his last breath, he dedicated his life to hockey,” Upadhyay says. “I know only two people who have lived for this sport – one is Bawa, the legendary coach from Mumbai, and the other person is Teju bhaiya.”

Singh may not be around anymore but his legacy lives on. Even today, hundreds of children practice every day at the ground, stay at Singh’s home, are fed three meals daily and study free of cost at the institution he set up.

Their aspirations will be fuelled further when they see one of their own on the biggest stage of all in Tokyo. And Upadhyay, a strong believer in karma, is now supporting their cause – donating hockey sticks, t-shirts and shoes. “When I needed help, I received it. Now it’s my turn to return the favour and assist those who are in need of support,” Upadhyay says.

He pauses momentarily and wears the philosopher’s hat again. “Woh kehte hai na, insaan paida kahin hota hai, naukri kahin karta hai aur marta kahin aur hai. (A man is born at some place, he works somewhere else and eventually he dies at a third place). For me, Karampur will always be that place.”