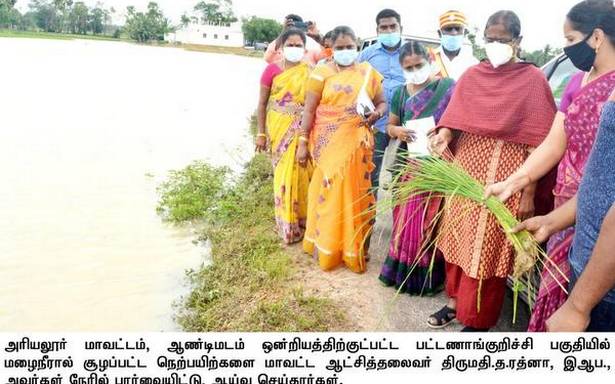 With the unseasonal rainfall during this month resulting in waterlogging and lodging of crops in some parts of the central region, farmers have called for a fresh enumeration for sanction of compensation to affected farmers.

Inundation of paddy, groundnut and blackgram crops were reported in villages in Andimadam and Jayamkondam blocks in Ariyalur district on Thursday. Lodging of paddy crop ready for harvest was also reported in T. Palur area.

Ariyalur Collector D. Rathna, accompanied by Agriculture Department and other officials, inspected some of the affected fields and areas at Kattathur, Villanatham and Pattanankurichi in Andimadam block on Thursday She instructed the officials to take steps to drain the water and use earthmovers wherever necessary to clear drainages.

Ms. Rathna said agricultural fields and residential areas have been inundated at Andimadam, Jayamkondam and Sendurai taluks due to Wednesday’s heavy rain. Steps were taken to accommodate affected residents in temporary shelters.

Paddy crop on about 750 hectares, blackgram on 300 hectares and 300 hectares of groundnut have been waterlogged in Andimadam taluk and steps have been taken to drain the water without affecting agricultural operations, she said.

Sources in the Agriculture Department said that crops in Jayamkondam taluk have also been waterlogged. Lodging of paddy crop, ready for harvest, has been reported in about 500 hectares in T. Palur area, the sources said.

Over 5,000 hectares of crops were estimated to have been damaged in the district due to heavy rainfall caused by Cyclones Burevi and Nivar, the sources added.

Meanwhile, P. R. Pandian, president, Tamil Nadu All Farmers Associations Coordination Committee, while speaking to reporters at Sirkazhi on Thursday, urged Chief Minister Edappadi K. Palaniswami to order a fresh enumeration of crop damages in the wake of the unseasonal rainfall. Although an enumeration of crops affected by the rainfall caused by the cyclones have been completed, a re-survey was required in view of the latest spell of rainfall. In many places, crops ready for harvest have been damaged causing heavy losses to farmers, he said.

Since rainfall has been predicted till Pongal, the government should conduct a fresh enumeration of crop damages after the festival, he demanded.