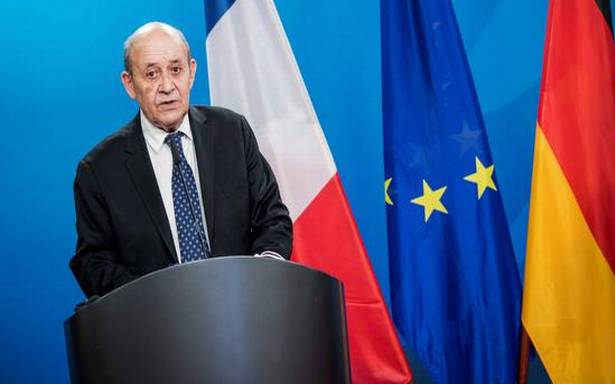 The French Minister for Europe and Foreign Affairs, Jean-Yves Le Drian, will visit India during April 13 to 15, the Embassy of France announced on Monday. Mr. Le Drian will hold talks with his Indian counterpart S. Jaishankar and participate in the Raisina Dialogue.

The ministerial talks are expected to focus on “all aspects of the bilateral strategic partnership” covering joint ventures in the Indo-Pacific and cooperation at the UN Security Council where India has completed the first three months of its stint as a non-permanent member.

Despite close strategic partnership between the two sides, India in recent weeks has adopted a cautious approach at the UNSC. India has participated in the “Arria-formula” meetings, the consultation among the 15 members of the UNSC over conflict zones and other contentious issues, while expressing reservations about the format of the meeting. On March 8, India, along with Russia and China, were the only three countries that did not sponsor the meeting on “women, peace and security.” The meeting was sponsored by other 12 members including France. Two similar meetings on the issue of Crimea held on March 12 and 17 also tested India’s multilateral diplomacy as the issue was sensitive from the Russian point of view. India’s cautious position comes from the understanding that the “Arria-formula” meetings have been “misused” in the past by the biggest global players.

Mr. Le Drian’s visit to Delhi is likely to explore India’s sensitivities on ties with other powers such as Russia, China and India’s emerging partnership with Australia, the U.S., and Japan in the ‘Quad’. Last week, the Indian Navy, for the first time, joined the France-led multilateral maritime exercise La Pérouse in the Eastern Indian Ocean which also saw participation of other countries of the Quadrilateral grouping Australia, Japan and the U.S.

The visit comes just over a week after a three-part investigative series by French media outlet, Mediapart revealed, based on French anti-corruption agency audit, how French aircraft manufacturer Dassault Aviation had paid €1 million to an Indian company owned by a middleman, Sushen Gupta, in connection with the €7.87 bn Rafale deal between India and France in 2016. Mr. Gupta is already being investigated for another defence deal in India. It said French anti-corruption authorities made no serious attempts to investigate the angle of corruption and favouritism surrounding the Rafale deal.

The articles also detailed how Mr. Gupta obtained crucial documents on the Indian negotiating team involved in the Rafale deal and supplied them to Dassault Aviation. Deliveries of the Rafale jets are currently under way and the Indian Air Force has so far received 14 of the 36 jets.

Mr. Le Drian and Mr. Jaishankar will be joined by Australian Foreign Minister Marise Payne at the Raisina Dialogue which has emerged as the biggest diplomatic lecture series of India. He will also hold talks with Minister for Environment, Forest and Climate Change Prakash Javadekar during his stay here. Mr. Le Drian will conclude his visit in Bengaluru where he will highlight Indo-French collaboration in health and biological sciences and also meet the French tech community in the city.