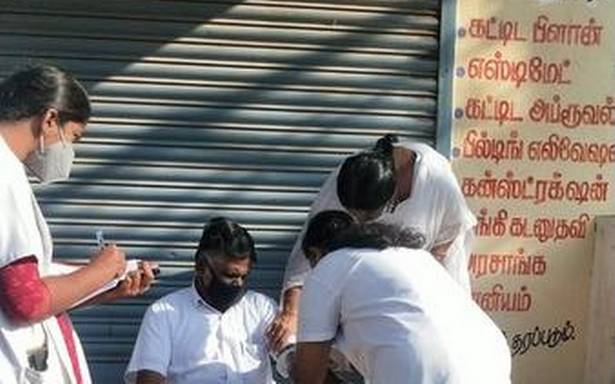 Steps to determine development of antibodies against COVID-19 among residents

Health officials in the district have undertaken the fourth round of serological surveillance to determine the development of antibodies against COVID-19 among residents in Tiruchi. While the exercise would help in indicating herd immunity, it would also help determine the population eligible for the booster dose, the officials said.

The State health department identified 42 localities, of which 14 were in Tiruchi city. In the city alone, 1,500 samples would be taken. These places were selected as they had reported a high number of containment zones, and also a good response to the vaccination drives.

A team of four doctors began working to collect blood samples on Dec 26, and work will go on till December 31. "A large combination of samples is being taken under the Kish Method – a way of randomly choosing survey respondents within a household," A. Mohammed Hakkim, doctor in charge of the survey said.

The samples will be sent to a laboratory of the DPH to test for antibodies. The team was also taking random samples to determine the spread of dengue fever.

During the first serosurvey, health officials found 30% of the population with antibodies in Tiruchi city, while in the second round, which was between the first and second waves of COVID-19, it was around 27%.

About 60% of the 300 people whose blood samples were collected during the third serosurvey had developed antibodies against COVID-19.

This time around, the person from whom the sample was taken would also get a certificate of their antibodies’ status, a health official said.