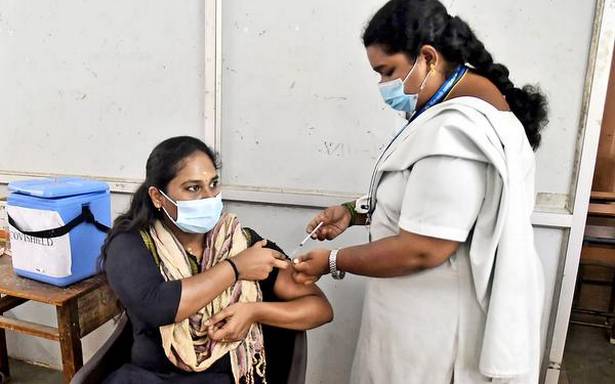 Covishield and Covaxin were available at the camps

The fourth mega vaccination drive was conducted in the districts on Sunday with higher allocation of vaccine doses.

In Salem, the district administration targeted to administer 1.72 lakh vaccine doses on the day and 1,392 vaccination centres were arranged as part of the drive. The vaccination drive was conducted till 7 p.m.

Both first and second doses of Covishield and Covaxin vaccines were administered at the camps.

In Salem, Corporation Commissioner T.Christuraj inspected the progress of vaccination drive at a centre set up in a school. A total of 100 camps were set up in the Corporation limits and 1,750 persons were deployed for the drive.

In Namakkal, the district administration targeted to administer 58,000 doses through 440 static centres and 21 mobile centres. District Collector Shreya P.Singh visited the camps at Rasipuram, Kumarapalayam and Ponkuruchi and inspected the progress of the camps.

In Krishnagiri, Collector V. Jayachandra Banu Reddy inspected the progress of vaccination drive at camps set up in Kothakondapalli and Belakondapalli along with Hosur legislator Y.Prakash. The drive was held at 723 centres and the district administration aimed to administer 80,100 doses of vaccines on the day.

In Dharmapuri, the vaccination drive was conducted through 380 camps. Collector S.Divyadarshini visited the camps set up at Thandakarnalli, Murukampatti and a few other places.

In Erode district, the vaccination camp was arranged at 577 centres. By 7 p.m, 56,417 vaccine doses were administered in the district.